Somehow, Salford-born songwriter Graham Gouldman remains an undervalued figure. There are two simple ways to remedy this. One is to read Paul Hanley‘s Manchester music book Leave the Capital, which spells out Gouldman’s achievements and through which he emerges as the hero. The other is to hear him play his songs live, and having done the former, Northern Soul was grateful to take the opportunity to do the latter.

It’s a special night, too. The marvellous Stoller Hall space in Manchester is hosting Gouldman as a fundraiser for Manchester Jewish Museum, which Gouldman’s father Hymie was instrumental in setting up back in 1984. The set tonight is Gouldman’s regular acoustic Heart Full of Songs show, highlighting the many classic tunes he’s written down the years. Several were major hits, from No Milk Today (made famous by Herman’s Hermits), Bus Stop (The Hollies) and For Your Love (The Yardbirds). Others solo works are less familiar, including the theme to the 1979 Farrah Fawcett movie vehicle Sunburn and Love’s Not for Me from the 1980 animated comedy Animalympics. Newer tracks such as Daylight, Say the Word and Let’s Get Lost get an airing too and each one amply demonstrates Gouldman’s undiminished winning way with a precision-engineered yet greatly affecting melody. 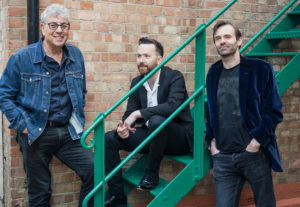 Obviously, there is plenty of room here for songs written for bands of which Gouldman himself was a member. Wax’s Bridge to Your Heart is reconfigured from late 80s synthesiser pop to a swinging show-tune. The 10cc years are represented by Things We Do For Love, Good Morning Judge, Dreadlock Holiday and the immortal I’m Not in Love, each delivered faithfully by Gouldman with accompaniment from two young musicians/singers, Iain Hornal and Ciaran Jeremiah, plus an occasional smattering of percussion. From the off, the stage is littered with guitars.

Overall it is perhaps gentle and sedate rather than banging, and while that’s befitting of the classy setting and a performer now into his 70s, just a little more oomph wouldn’t have gone amiss. Gouldman comes across as a genuine, unstarry figure, and his stage banter is warm and amiable. There are good tales told, such as his father Hymie providing the spark of inspiration for No Milk Today, and again more could be made of this. Given his gift as a writer of songs that tell stories, it would be fascinating to hear more even detail on how and why each song came about.

All told though this is a neat, relishable celebration of Gouldman’s work. By anyone’s estimation his is a stellar body of work, a pop/rock greatest hits which anyone could be proud of. Possibly he’s not immediately identifiable in the public eye as the author of them all, but it’s a real pleasure to hear him perform them in such an intimate setting and for such a good cause. Bafflingly, there are some empty seats in the auditorium. His legend looms large, but it probably deserves to loom larger still.