Name your ten best Indian restaurants in Manchester. This and That for value for money and good cooking, obvs, and…actually they’re pretty much all the same. Even Akbar’s, which gets great reviews, is only average and contents itself to wow clients with a plush interior.

Manchester restaurateurs say that punters are more interested in the room than the food – Rosso’s is the perfect example – but that may be changing. The growing number of restaurants run by people passionate about food is encouraging. I went to the opening of Beastro in Spinningfields last week, the only restaurant I know owned and run by butchers so they really know about meat, and I’m a regular at Rudy’s – when I can get in – and the Rose Garden. Now I can add Indique to the list.

Most of the Indian restos – I like this French contraction, ‘un resto’ – in this country are run by Bangladeshis, a hangover from the First World War when the stokers on British warships all came from Sylhet in East Bengal; a couple jumped ship in London and started a café for their shipmates. They adapted their style to English palates, taught their relatives, and the rest is Friday night vindaloo (originally a pork and garlic pickle called carne de vinha d’alhos, brought to Goa by the Portuguese). There’s a great recipe for it in the legendary, pre-Madhur Jaffrey, Indian Cookery by Mrs Balbir Singh, which uses pork shoulder, 24 cloves of garlic and lashings of tamarind. It’s utterly delicious. 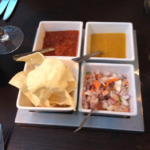 So when you find an Indian resto run by Indians, you hope for something different. The Punjab used to be the only Indian-run eatery in Manchester’s Curry Mile, and was extremely distinctive, until it started serving meat dishes and reverted to type. Now there’s Indique, situated in the bit of West Didsbury’s Burton Road, north of the tram stop. It signals its difference immediately. It’s a modern room, devoid of flock, with good tablecloths and cutlery, and the menu is short, lacking the usual riffs on a basic sauce. A little plate of poppadums and pickles arrives as an amuse bouche and, despite a thin mango jam which could do with a few chunks, is perfectly pleasant.

The starters are divided into Street Food and The Grill, the former has puris and samosas, the latter tikkas and kebabs. I choose Tawa scallops – seared king scallop marinated with fennel, star anise and turmeric, served with an onion and tomato relish. You mess with scallops at your peril, but these work. The marinade lends a slight zing although the relish is unsurprising. The presentation is modern – three scallops on a long plate separated by two small towers of curly cucumber. My dining companion has the Chicken Tikka kathi rolls, which are flat bread rolls with a tangy filling, better than the M&S variety. They’re presented on a black slate with two striking lines of green sauce, which turns out to be a remarkably savoury version of the yoghurt, mint and coriander sauce you get everywhere. 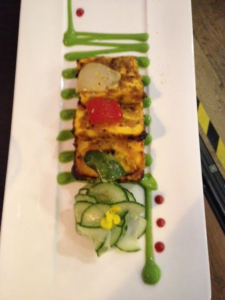 The 16 main courses are a mixture of old favourites (Sag Gosht, Hyderabdi Chicken Byriani) and dishes I have not seen before – Lau Mussalam, a marrow stiffed with potatoes and nuts and cooked in a caramelised onion sauce, Smoky Lal Maas Pitika, lamb chops in a smoky tomato sauce, and there’s a vegetarian menu too with 11 mains. We settle for old favourites, that way we have something to compare them with. 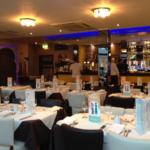 My Chicken Biryani comes in its own pot with a raita and, rather unusually, the main ingredients, rice and chicken, seem to have spent a long time in each other’s company. I could eat it again now. Her Lamb Sag is less successful. The lamb is spot on, juicy and tender, but the spinach sauce has that soupy consistency you get from Indian tinned spinach. Later we discuss this with the manager, who swears that it’s home-made but promises to investigate. On the other hand, we share an Achari Paneer Tikka, also home-made, which is the best paneer I’ve ever had. It comes on another plate of that interesting striped green sauce and the obligatory spiralised cucumber, and has a taste and texture reminiscent of perfectly cooked halloumi. The pilau rice is fragrant, as you’d expect, and for pudding we share a gulab jamun and ice cream which is as it should be.

The bill for all this including a remarkably good but incredibly inexpensive bottle of house pinotage is £65 without service. If I lived round the corner I’d go once a week. But I don’t, I live in Marple where the five ‘Indian’ takeaways are distinguished only by the varying amounts of tomato ketchup they put in their curries. However, all that is about to change. We’re getting an Indian street food resto from the lovely Aarti from Chaat Cart who won Best Street Food in last year’s Manchester Food and Drink Awards. 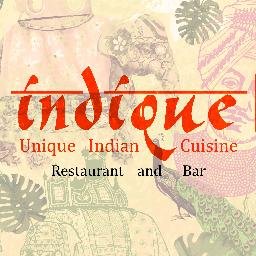