Manchester’s Spinningfields is not my usual haunt. There’s something about the glossy buildings that simply doesn’t appeal. It conjures images of suits and fancy-ish women in fancy-ish dresses congregating by the bar. I prefer the pre-war graffiti-daubed grunginess of the Northern Quarter, and the undoneness that only comes with old buildings.

With this is mind, it’s rare for me to venture to the other side of Deansgate – it’s just not my turf – but my curiosity to check out new eatery, The Refinery, has me journeying through this popular, sparkly enclave.

Part of the Drake and Morgan group, The Refinery is the newest addition to Manchester’s fashionable drinking and dining district. I immediately warm to the interior. The bar is open and large, and the tables are lit with candlesticks and tea lights giving it an intimate atmosphere.

Now, I love a good cocktail and Manchester is not short of a fantastic bar or two. While it’s impossible to match the inventiveness of places like Dusk til Pawn, The Refinery has a few good drinks up its sleeve. My favourite tipple? Gin. I like my cocktails strong and intoxicating. Housemate on the other hand, well, she has a sweet tooth. At the recommendation of our waitress – the team at The Refinery have customer service nailed – we begin with a London Spritz (gin, elderflower, cucumber and soda), before finishing with a classic Mojito – arguably one of the best I’ve ever had (and I’ve quaffed a few). But my drinking buddy is a little disappointed with her Tiki Punch (rum, banana, pineapple, lime and stout) which was too sharp for her taste buds. Our friendly waitress offers to make her something sweeter.

“Oh no,” housemate declares, clutching her copper goblet like something out of Harry Potter. “It was just different from what I had in mind.” 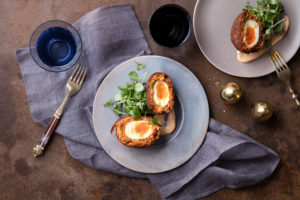 Different from what I had in mind is an excellent way to describe The Refinery. Although high-spec like the rest of Spinningfields’ restaurants – think copper tables and soft, edgy lighting – its relaxed, more welcoming and a little ‘cooler’ than its competitors.

“Not a fan of the maps of London, though,” housemate says, ever the Manchester advocate.

I love an open kitchen. I like to sneak peaks at other people’s food before I decide what I’m picking. We watch as our starters are placed on the pass: chorizo scotch egg for carnivore housemate which oozes delicious yolk onto the plate, and moreish salt and pepper calamari for pescatarian me. 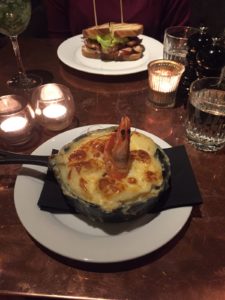 Occasionally with mains, I struggle, but menus seem to be more inclusive of vegetarians, pescatarians and vegans of late, and The Refinery is no exception (all the burgers come with the option to go gluten-free or skinny). I opt for the fish pie which arrives with a thick layer of mash and cheese – just the way it should be – and a black-eyed prawn looking back at me. I’m not squeamish when it comes to seafood but I know a few who would be put off by the crustacean. Housemate picks a chicken sandwich which looks a little out of place in the stylish atmosphere – it was tasty, but a little underwhelming. The cheese and rosemary fries, on the other hand, were delicious.

Was there room for pudding? Just. Chocolate brownie, hot chocolate sauce and ice cream. “That’s nice,” we both agree, and it’s just that. Nice. 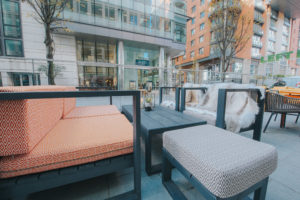 As we leave the restaurant, we spy the outside area and investigate. With comfy seats, lanterns and the bonus of blankets, faux-fur throws and hot water bottles, it’s a quirky take on a terrace. My housemate picks up a bottle.

“This is such a great idea,” she says. “But it’s cold. Who wants a barely warm water bottle?”

I agree that the item is redundant if it’s not hot, but suggest that the upkeep would mean someone constantly topping up the kettle. “I suppose you just nip to the bar and ask them to fill it up.”

In terms of atmosphere and comfort, I prefer the outdoor space of The Refinery to say, that of The Alchemist. Overall, though? I really like The Refinery. It’s a great place to go if you’re looking for fantastic drinks, a good lunch and a high-end atmosphere. The cocktails and delectable starters will certainly have me going back for more.