It’s a long time since I’ve seen anyone wearing a snake belt, but when the poet Roger McGough takes to the Liverpool Playhouse stage wearing just such an accessory, it turns out to be merely the first disarming sensory flashback of my night.

More neural tumult follows as McGough and fellow Liverpudlian Brian Patten rattle through poems from their celebrated anthology The Mersey Sound, the book that made the two of them, plus the late Adrian Henri, into official Penguin Modern Poets half a century ago.

First published in 1967, the witty and accessible collection brought global attention to Liverpool’s vibrant 1960s poetry scene, and is often said to be the best-selling poetry anthology of all time. I discovered it in the mid-80s during my teen poet years, and as the two writers read their work, some of the scattered rhymes and images detonate inside my skull like poetic gelignite. Clearly, these poems snagged on my soul when I wasn’t looking, coiling themselves round the double helix of my emotional DNA. 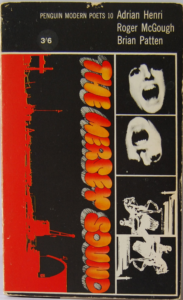 Fifty years on from its publication, The Mersey Sound is the perfect book with which to open this homecoming celebration of the writers’ work. However, as a collection written by young men in the midst of a swinging pop-fuelled scene, it might be inappropriate for it to dominate the performances given by these now rather elderly men.

Fortunately, after a respectful nod to the book’s lofty place in the history of British poetry (and a jovial sneer at the contemporary critic who described their audience as “the great unwashed”), McGough and Patten move on to deliver sets derived from the full breadth of their respective careers, allowing them to go deeper and, at times, darker as they explore what it is to be alive.

McGough and Patten are joined for the occasion by Little Machine, a three-piece poetry band who have made a name by setting classic poems to music. Instead of appearing as a support act, the band is integrated into the entire evening, initially giving voice to Adrian Henri’s wonderful Love Is (“Love is feeling cold in the back of vans, Love is a fan club with only two fans”) before going on to flow in and out of proceedings as required.

Sometimes they perform work from their own repertoire, including poems by Yeats, Shelley and Byron, and at other times they help to flesh out some of McGough’s work, adding a musical touch that reminds us that both he and Henri always traversed the borders between poetry and pop. Back in the late 1960s, for instance, McGough’s group The Scaffold made regular appearances on Top of the Pops, while Henri toured extensively with his poetry rock band The Liverpool Scene.

McGough’s playful style often works well with Little Machine’s treatments, though during his solo passages I sometimes find myself wishing for a little less comic surrealism, a little more emotional engagement. At his best, however, he manages to combine his signature gentle humour and word play with ideas that suddenly reveal a more potent form of truth.

For instance, in the unpromisingly titled Crazy Bastard, he considers the regrets that shadow the lives of those who, like him, are risk averse. Remembering an occasion when his friends indulged in some spontaneous skinny dipping, he tells how he was tempted to join them before, poignantly, thinking better of it: “Someone had better stay behind and look after the clothes.”

As for Patten, he always seemed to me to be the most serious of the Liverpool Poets, the one who targeted a lonelier, more reflective space than either McGough or Henri. However, his demeanour tonight takes me by surprise. Although thoughts of ageing and death recur throughout the poems he reads, he is jollier and more able to unlock a collective belly laugh from the packed house than I had imagined would be the case. He smiles and twinkles even as he reads poems like the beautiful Friends Revisited (“The world slowed down, And I began to meet those friends less and less”) which can’t help but elicit warm murmurs of recognition and solidarity as the bitter-sweet last lines fade away. 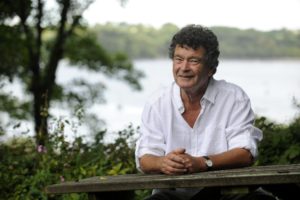 There is time too for a generous tribute to the late Adrian Mitchell, who Patten describes as “the fourth Liverpool Poet, in the way that there was always supposed to be a fifth Beatle”. In a poem written two months after Mitchell’s death in 2008, he imagines drinking with the poet’s ghost in his Devon orchard, describing how the spirit pulls up a chair and falls through it. “I’m not used to this being dead stuff,” says Mitchell, a line that seems to echo Patten’s own inability to accept beloved friends disappearing from his life.

Both McGough and Patten have travelled far since publication of The Mersey Sound, but a Liverpool gig remains something special, and this Playhouse crowd enjoys welcoming them back to the city once again. It’s also an opportune time to be revisiting the book that helped make their names, as Liverpool will soon be hosting a festival called Tonight at Noon dedicated to the anthology and its three authors.

Among other things, audiences will be able to peruse The Mersey Sound archives, including the manuscripts, letters and other material that helped a grassroots city scene conquer what had seemed like a very closed world. But more wonderful than that is the fact that two of those heroes are still with us, doing what the Liverpool Poets always did best – namely reading their work aloud.