Oh, the irony! I had to miss the Marx Brothers’ A Night at the Opera for a night at the opera. The film contains one of my all-time favourite shticks: “there ain’t no sanity clause”, which Chico says to Groucho at the end of a long legal skit. It remains my Christmas motto to this day. All of which brings me round to Royal Northern College of Music’s annual seasonal student opera. Last year it was Massenet’s Cendrillon, the best opera I saw in 2017. So this year they had to beat the double expectation of missing the Marx Brothers and the best opera I saw all last year. No small order.

For 2018, the college presented two thirds of Puccini’s Il trittico, Suor Angelica and Gianni Schicchi. They formed part of Puccini’s triple bill of hour-long operettas first performed in 1918 and often claimed to be Puccini’s underrated masterpiece. The two most often performed are the tragic Suor Angelica and the comic Gianni Schicchi – difficult to balance because of the emotional response each is expected to induce. As far as I’m aware, for the first time the production team at the RNCM employed professional singers in the lead roles which became an object of discussion during the interval drinks.

First on the bill was Suor Angelica. It tells the sad tale of the melancholic Sister Angelica, seven years into her marriage to Christ. The gossip among the other sisters is that Angelica has been sent to the convent as punishment for an undisclosed sin. The opening of the operetta is joyful and relaxed as the nuns celebrate the coming of the golden water to the fountain as the dusk light taints the colour of the spray. The stage is bathed is a glorious light as the ensemble harmonise beautifully. 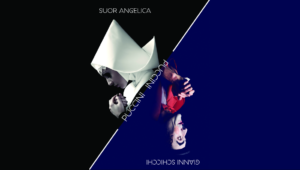 It was so moving I found a small tear slowly moving down my cheek somewhat unexpectedly. I must admit I do love a good nun story. Sister Angelica (Linda Richardson) comes in from the garden to be informed of the visit of her aunt, the first visitor she has had in seven years. La Zia Principessa (Stephanie Maitland) tells Angelica that her son (the original sin) died two years earlier. Heartbroken and inconsolable, Angelica commits the mortal sin and kills herself. She supplicants herself to the Virgin Mary and is reunited with her son before a heavenly choir. Well, that small tear had now become a flood as I wept openly during one of the most moving scenes I have ever had the good fortune to experience. It was difficult to tell the professionals from the students as all the performances were uniformly excellent.

Eyes bloodshot, I returned to my seat after the interval to be cheered by the antics of Gianni Schicchi. The story follows the scheming of the bereft family of the rich but dead Buoso Donati (stiffly played by Louis-Charles Gagnon). He has left all his money to the monks and the family must find a way to forge a new will. Rinuccio (Ian Henderson), a nephew of the deceased, implores the family to employ the father of his betrothed Lauretta (Yuliya Shvarko), the titular Gianni Schicchi (Quentin Hayes). Schicchi agrees but as he impersonates Donati to rewrite the will in front of the notary (Liam McNally), he robs the greedy family to his benefit (and Lauretta and Rinuccio). It is left to Lauretta to sing the best known of Gianni Schicchi’s arias, O mio babbino caro, but I was also impressed by Rinuccio as well as the comic timing of Hayes and the rest of the familia Donati. It went some way to restoring my equilibrium after the desolation of Suor Angelica, without doubt the performance of 2018.

It’s been another epic year here at OperaWatch in Northern Soul Towers. From all of us, I wish you a Merry Christmas and see you in 2019. But remember, “there ain’t no sanity clause”.

(with an extra seasonal star for Sister Angelica)