Saturday night was going to be big. Andy was being interviewed by Emily about “letting the side down”. It was about to be both a whitewash and a car crash which would make it a car wash. I’m rather glad I had tickets to see a real rarity, Bohuslav Martinü’s The Greek Passion. It was also an opportunity to see the debut of Garry Walker, Opera North’s new musical Ddirector, conducting his first performance for the company. Everyone who reads this column knows how much I love Opera North and, with the departure of Richard Farnes, he has big boots to fill. As I said, Saturday was going to be big.

The Greek Passion is an interesting choice and, as it turns out, a timely one. Martinü based the libretto on a novel by Nikos Kazantzakis, who also wrote Zorba the Greek. In 1956, Martinü first submitted the piece to the Royal Opera House who rejected it. After heavy revisions, it was accepted by the Operhaus Zurich and premiered in 1961. This is the original ‘London’ version, only performed a decade ago. 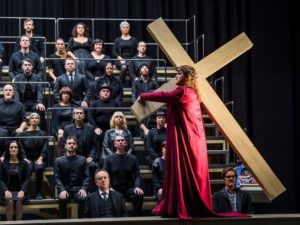 The opera concerns the small Greek village of Lycovrissi whose residents are auditioning roles for their annual Passion Play. The moody and reclusive shepherd, Manolios (Nicky Spence), is chosen to play Christ. Other roles are filled by Yannankos (Paul Nilon) as the postman, with Kostandis (Richard Mosley-Evans) and Michelis (Rhodri Prys Jones) as the Apostles. Katrerina (Magdalena Molendowska), the sexy widow, is typecast as Mary Magdalene, and her rough-as-toast drunken lover Panait (Jeffrey Lloyd-Roberts) grumpily accepts the role of Judas. It is made clear that the power of selection, and all else, is in the hands of the village elders, Priest Grigoris (Stephen Gadd), Archon (Jonathan Best), a rich merchant, Captain (Steven Page), a war veteran, the Schoolmaster (Ivan Sharpe) and Father Ladas (Jeremy Peaker). 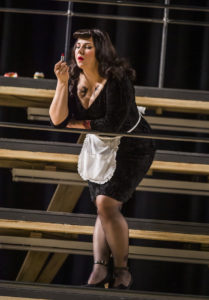 The political, religious and sexual tensions in the village rise to the surface and are exasperated by the arrival of a group of starving refugees from a village that has been sacked by the Turks. And not the faux, finger-pointing sacking that you might get from Alan Sugar, no, the real looting, burning and pillaging sacking. In an act of real design genius by Charles Edwards, they are represented by plaster-white life-size figures, a bleak and moving metaphor for immigrants everywhere. They are led by the enigmatic Priest Fotis (John Savournin). At the end of act two, Fotis leads the company in a rousing Hakka. “Give us what to have too much of” they rhythmically repeat in a heartbreaking chorus that echoes across our own times.

The increasingly introverted Manolios believes he is Christ and must help the desolate refugees, much to the ire of the village elders lead by the vocal hypocrisy of modern Christianity, Priest Grigoris. As the villagers gather, he excommunicates Manolios, who is then murdered – bludgeoned to death by his own cross. Lycovrissi celebrates Christmas together as the refugees starve to death in the snow.

This was a powerful, poignant and, above all, relevant opera for our times. I thank Opera North and congratulate the company on being a Theatre Company of Sanctuary for its work with refugees. To Garry Walker and the whole cast of The Greek Passion, bravo for this overwhelming production. In our cynical age where lies continue to protect the ruling class and the displaced still die in the snow, it is worth being reminded that art has something to say.