From Corrie to Cheese: the Saddleworth Cheese Company

Chris Park January 29, 2016 Enterprise, Taste Comments Off on From Corrie to Cheese: the Saddleworth Cheese Company

“I bet you didn’t know I made cheese.” This banner can be spotted at food markets up and down the country. From a distance, the casual observer may wonder what on earth it means. But get closer, take a look at the man behind the counter, and the Coronation Street fans among you will recognise Sean Wilson, the former actor who played Martin Platt for more than two decades.

Today, Wilson is an award-winning cheesemaker, the brains behind The Saddleworth Cheese Company and the author of the popular Great Northern Cookbook, a love letter to the great Northern recipes of times past and present.

But how did Wilson make the jump from our living rooms to the kitchen?

“I was working in a Michelin star restaurant,” he tells Northern Soul. “When I was there I was introduced to a Lancashire cheesemaker. I love turning raw materials into products so I started the company.”

Wilson, who grew up in Ashton-under-Lyne but has lived in Saddleworth for the past 20 years, was taught by Bob Kitching at Leagram Organic Dairy, voted one of the top ten cheesemakers in the country by The Sunday Telegraph. Sadly, Kitching died in 2013 but his legacy lives on in Wilson’s The Saddleworth Cheese Company. 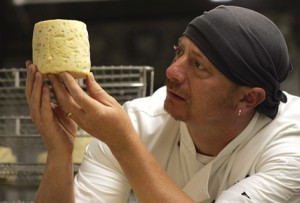 Wilson launched the firm in 2009 along with his best friend Mark Revell, formerly of the band The Icicle Works. From the start, the pair made sure they stayed true to their Northern roots by producing four signature cheeses: How’s yer Father (it’s always nice to have a bit of How’s yer Father), Muldoon’s Picnic (a Lancashire term given to a room full of screaming kids), Smelly Ha’Peth (a child covered in muck after a full day’s play) and Mouth Almighty.

“I want to open people’s eyes to Lancashire cheese,” Wilson says. “I’ve just been to a franchising meeting, I’m now looking for people to take on this ethos for me.”

Timing is an important factor and I wondered if the new hunger for artisan produce had helped him.

“As a country the wheel is turning back to good produce but not as quickly as you might think. People still need to shop in supermarkets. You can get my cheese in Tesco Express now and that was my reasoning, get at least one good cheese on the shelves.”

A grand plan and a world away from his show business past, he adds. “My role is moving to a more business-led role. Companies have to evolve. I spent two years standing in the dairy making cheese but the company needs someone to sell it and who better than me?

“I’ve always been passionate about real food with a story and tradition behind it.” 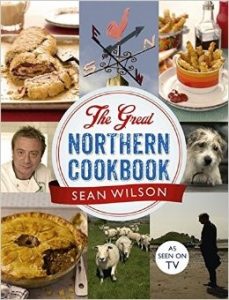 In 2013 Wilson produced and presented The Great Northern Cookbook, a show for Channel 5 which explored the food heritage of the North of England and also resulted in a cookbook.

“I would love to repeat it but Channel 5 decided they were no longer doing cooking programmes.” Nevertheless, Wilson did not let this deter him from his love of food. “I love melding flavours together to make the best thing you’ve ever tasted.”

Given he has won awards all over the country, does Wilson think there a North/South divide when it comes to his produce?

“In the South they tend to be more impressed by the cheesemaking although the North is our main market. I can have the same conversation in Aberdeen or Kent, they know me off Corrie and that I make cheese.”

With the possibility of another book and TV series in the pipeline, the future looks bright for The Saddleworth Cheese Company. As someone who has sampled its wares on more than one occasion, I can heartily recommend that you do the same.