In a new series called Sounds Northern, Paul Davies shines a spotlight on Northern musicians and bands to watch out for. This week it’s 10o’clock Chemical.

They are four friends who met through the local music scene in Stoke-on-Trent and they provide an intriguing mix of electronic rock that is gritty and accessible in equal measure.

Their first EP Favours for the Wicked has been released this summer and acts as a cynically bold commentary of the world around us. The reliance of social media, the rise of ‘fake news’ and consumerist culture are all scrutinised and yet despite these themes, the vocals and sounds provide a seductive mix. It’s a dystopia you can dance to.

Speaking about their debut single Babylon is Fallen, the band said: “Everything is filtered and more of us than ever before are guilty of neglecting relationships and human experience for touchscreen talking and computerised entertainment. The virtual harbours aimed at making us happier are making us more alone.” 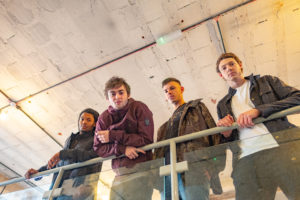 There’s satire and there’s swagger on display yet the sneer on EP opener It’s War is immersed in reverse reverb and there’s a glossy sheen to the songs provided by Jamiroquai’s Matt Johnson on production duties. Contrasting dark synths lurk in the background underneath driving funky basslines and it’s like the cyberpunk disco sounds that should have been playing in the Tech Noir nightclub in The Terminator.

Second single We are Digital might be the best representative of what they do, more of an instant rush that mixes 90s elements as well as 21st century artists like The Faint.

10o’clock Chemical don’t have many peers, and this makes them all the more refreshing. Their songs are slick, addictive and have a moreish intrigue. There’s also plenty of lyrical inspiration coming from the current social and political climate to whet the appetite for future releases. 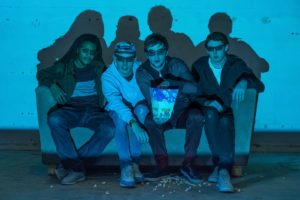 Favours for the Wicked EP can be found here