Drew Tosh May 5, 2018 Arts, TV Comments Off on “You should absolutely grow old disgracefully.” Sue Johnston talks to Northern Soul

A fixture on our screens for more than 35 years, Sue Johnston’s telly CV is impressive: Brookside, The Royle Family, Waking the Dead, Coronation Street, Downton Abbey and Jam & Jerusalem to name but a few.

She’s just enjoyed one of her busiest years with projects including Age Before Beauty, a new TV series written by Debbie Horsfield, guest roles in The Good Karma Hospital and Kiri, the radio series Love in Recovery and a movie Walk Like A Panther.

“I know it looks like I’m everywhere,” says Johnston. “But I’m not really because most of the work has already been done. I didn’t stop last year, and I’ve had a busy Spring, but I do take time out, thankfully.”

Strong roles for veteran actresses can be difficult to come by as writers struggle to create realistic, mature characters. I wonder if Warrington-born Johnston (now aged 74) has noticed any progress in the types of parts on offer?

“Things are improving but it’s been a long time coming and it’s not there yet. There’s still an awful lot of cliched stuff. I was watching something the other day and thinking ‘gosh this is so bad’. It was old women in a group, dressed very stereotypically, saying things like ‘we’ll make you a nice cup of tea and a drop scone’. I’ve never made a drop scone in my life. You only have to look around to see how women actually are in their 70s and 80s. We have lives and dress fashionably and whimsically and eccentrically. You should absolutely grow old disgracefully and your grandchildren will appreciate it too because you sort of go down to their level.

“My character in Age Before Beauty is the matriarch but she’s also a woman in her own right. She does Northern Soul dancing and enters a competition. I had to learn the moves and all the extras were fantastic dancers, so it was a wonderful experience. There wasn’t anything ‘old lady’ about the character and she was up for everything which I loved. Debbie Horsfield is such a good writer.” 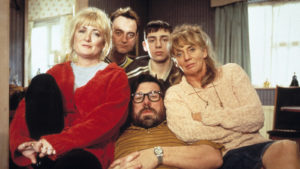 This year marks the 20th anniversary of The Royle Family, the ground-breaking comedy created by Caroline Aherne, Craig Cash and Henry Normal. The series gave Johnston perhaps her most iconic role as Barbara Royle, the long-suffering, kind-hearted Mum. It’s clear that the show was a joyful experience and that the loss of Aherne in 2016 is still deeply felt.

“I dreamt about Caroline last night which I’ve not done for a long time. I think it was because my subconscious knew I was going to do this interview. I can’t bring myself to take her number out of my phone. It’s that word ‘delete’. It’s so final. I’ve got a few friends who have passed but are still on my phone and they sometimes come up as I’m scrolling through my contacts list. If you’ve got them there in your phone, they’re still part of you and still alive in a way.”

The Royle Family changed the sitcom landscape forever with its intimate, fly-on-the-wall style. Episodes rarely moved away from the sitting room sofa and the family sitting watching television. Achieving what the creators wanted, however, was not without its early struggles, as Johnston recalls.

“Caroline, Craig and Henry had to fight very hard from the outset because they didn’t want the usual camera set-up or canned laughter. Even at the first read through, ‘suits’ from both Granada and the BBC were still arguing about giving the team what they wanted. We shot a pilot that was so bad we were never allowed to see it. Caroline buried it in the garden. We went back a month later and changes were made, and things took off from there. It really moved comedy forward and people started realising that you didn’t have to have canned laughter or a studio audience to make things work.

“It’s Caroline’s legacy and I’m delighted that it’s still held in such high regard. I’m incredibly proud to be part of it. It was the wonderful job you pray for every day and it gave me such a happy life. Even when they stopped filming to change the lights we never left the sofas. We just stayed there talking and laughing.”

However naturalistic the series appeared, it was all meticulously planned and rehearsed.

“We worked hard,” Johnston reveals. “Caroline was very strict on script. We had to be line perfect and weren’t allowed to improvise, although Ricky [Tomlinson] could occasionally do something at the end of a scene. It’s down to clever writing that it came so naturally out of the lips of the characters. They knew who they were writing for. Caroline told Ricky at an awards event that we were going to be her parents though, at the time, he hadn’t a clue who she was or what she meant.”

Johnston is no stranger to experiencing creative, cultural phenomena. In the 60s she witnessed first-hand the initial stages of the British music explosion.

“As a teenager in Liverpool, I worked in the tax office. I hated the job but The Cavern was nearby and we used to go there at lunchtimes so see The Quarrymen before they became The Beatles. I practically lived in there. It was more of a jazzy, beatnik type of place at the time. I got a job in Brian Epstein’s office which was fantastic, and I became great friends with Paul McCartney.

“My first serious boyfriend was the drummer in the Swinging Blue Jeans. They went on tour with the Rolling Stones and I took a week off and went with them. Watching them every night was brilliant. Eventually The Beatles went to London and my relationship broke up and I needed to do something with myself so I thought I’d better get back to acting.”

All these experiences must surely earn Johnston huge credibility with her grandchildren? Or so you’d think.

“The grand-kids are not interested if they see me on the telly,” she admits. “They see themselves videoed all the time. My five-year-old grandson loves The Beatles and I told him that I knew them but when I showed him old photographs it didn’t quite connect. He’s a real muso and downloaded The Killers music onto my phone and I’ve become a huge fan thanks to him.”

Next up for Johnston is the aforementioned new BBC drama Age Before Beauty, starring Robson Green and Lisa Riley. The series is about a family who run a beauty salon in Manchester’s Northern Quarter.

“That was great fun to do and a fab cast to be with. There’s dancing and singing and it’s very colourful, uplifting and fun. It’ll be interesting to see how it goes down because it’s so different and not heavy duty. We’re in a period of detective shows and Swedish-noir which I love, but we all need lifting up a bit too. Our politics seem to have gone so dark. It’s horrendous what’s going on out there at the moment.”

Despite a career full of highlights, Johnston still suffers from the classic actor’s curse – the fear of work offers drying up.

“There’s always that period of ‘I’ll never work again, that’s me done, I’m hopeless and nobody wants me’,” she confesses. “You have a better way of dealing with it now than when you’re younger. You don’t lose confidence and go into depression, but you do fret your career could be over. That never leaves you but that’s an actor’s life. There’s nothing, then suddenly something appears and you’re off again. 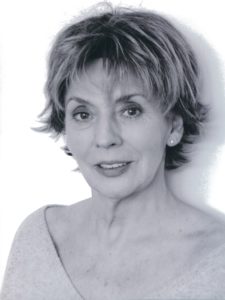 “I don’t want to not work or my career to be ended but it’s down to whether people want you. There are limited parts for women my age and a lot of very good people available so it’s hard. It would be lovely to keep on until I can’t do it anymore.”

The likes of June Whitfield, June Brown and Betty White have shown that age is no barrier to working in primetime television. The film world also continues to embrace the holy trinity of Dames – Dench, Mirren and Smith. In Downton Abbey, Johnston played Denker, lady’s maid to Dame Maggie’s formidable Dowager Countess.

“Oh god, I was frightened to death of her. I was very nervous but she was fantastic, and we laughed a lot but you minded your manners with her. She’s a very powerful person the way she holds herself.”

Perhaps young actors have felt the same type of nerves when working with you?

“You’re not conscious of it but you have to look out for it because it can happen. People have jokingly said they were terrified when they first knew they were going to be working with me. I just think ‘isn’t that awful?’ because I don’t see myself like that. Then I remember feeling the same way when I was a young actor still learning everything. Look how I still felt it with Maggie all these years later. I remember wonderful Sheridan Smith being nervous coming into The Royle Family because it was such a big programme. You have to look after and nurture people who come into your world.”

Age Before Beauty begins later this month on BBC1.

Sue Johnston is appearing at HOME, Manchester for The Royle Family at 20, part of the Pilot Light TV Festival, showing on May 5, 2018 at 2pm.