East is East will be familiar to a fair few people thanks to the hugely successful late 90s film. But the story first began back in 1996 when the play premiered at London’s Royal Court. Written by Ayub Khan-Din and largely based on his own upbringing in 1970s Salford, it depicts the lives of George, a Pakistani immigrant, Ella his long suffering British wife and the cultural struggles of their children.

As a fan of the film I was curious to see how Bolton Octagon would make it their own. The set made an immediate impact, with gloriously hideous 70s furniture complete with a tiled table and dreadful sofas. The floor was plastered with a mixture of Look-in covers, Bollywood stars and pictures of fish and chips – the perfect foundation for the unfolding drama.

Moving at a slick pace, the younger members of the Khan clan bring vivacious energy to the stage, bouncing off one another with totally believable sibling squabbles and witty one-liners. Shila Iqbal as tom-boy Meenah flits around the stage with an effervescent fizz. All the brothers deliver strong performances with Uzair Bhatti making a particular impact as Maneer on his professional debut, revealing a riveting stage presence which leaves you wishing he had more to do. Rohan Macleod’s Sanjit also shines with skilful comedic rhythm, and sports a palpably stinky parker which provides comedy gold. As an ensemble, the siblings make a fantastic combination drawing the audience into their world, deftly darting between moments of high drama and laugh-out-loud comedy. 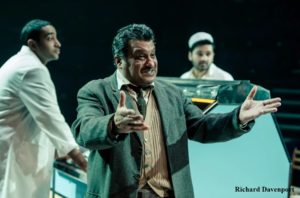 Performed in the round, the stage direction was seamless, the action working surprisingly well in the space. However, some of the dialogue was inaudible, although it’s difficult to gauge whether this was due to the theatre’s acoustics or lack of projection. Either way, this was little impediment with the story enthralling the audience and making me cry with laughter in places.

Harder hitting scenes between George and Ella were equally absorbing and sometimes genuinely upsetting. From the opening scene, Jane Hazlegrove sets the bar high, captivating us as Ella; she manages to channel a perfect combination of motherly strength and pathos. Likewise Kulvinder Ghir’s George, who expertly balances comedic energy with a hint of simmering violence which seems ready to erupt at any second. Their chemistry is totally convincing, leaving the audience feeling like voyeurs peeping through a chink in the living room wall.

Providing comic relief between George and Ella’s stormy dynamic, Claire Hackett proves to be a hilarious Auntie Annie, pummelling the audience with quick-fire lines delivered with superb comedy timing. Hackett and Hazlegrove’s exchanges are the star turn, reminiscent of Les Dawson’s Cissie and Ada with their flawlessly choreographed dialogue playing out like a comedic dance routine.

All in all, the Octagon’s East is East is a hugely entertaining tragi-comedy which, in this era of growing intolerance, is more relevant than ever.

East is East is at Bolton Octagon until April 14, 2018. For more information and to book tickets, click here.