After several false starts, the current virtual reality revolution feels different – something which became clear as I was treated to a pre-flight tour of the new IMAX VR Experience at the Trafford Centre Odeon. It appears the tech has finally caught up with the concept.

It’s certainly a coup for Manchester’s intu Trafford Centre to join the illustrious company of Manhattan, Los Angeles, Shanghai and Toronto as the only outlet to offer this particular brand of VR hub. Manchester’s version opened a couple of weeks ago and, as with its elder siblings, will slowly shape itself to visitors’ preferences. For instance, LA has become something of a horror-fest at the behest of its paying regulars. There is something appealing about such a bespoke experience and, sitting snugly next to the entrance of the Odeon cinema, movie tie-ins will present customers with a seamless experience, such as the Star Wars game due to be released in conjunction with The Last Jedi.

Each game is contained within a pod which is tailored to every experience. For instance, the gaming chairs with built-in movement and rumble packs add a genuine level of immersion by shaking and bucking you along with events in your virtual world.

I fully expected the first pod to be something of an introductory fluff piece. However, when the hangar bay doors opened on Space Flight: Orbital Emergency, my jaw dropped. As the spacecraft took off, the engines rumbling through the chair and noise-cancelling audio, I was left breathless as the craft blasted into the ether, revealing a truly beautiful 360-degree spacescape. The next few minutes were, despite being relatively passive, the most memorable. When explaining this exhilaration to my guide, Tom, he spoke of a lady from management who emerged with tears in her eyes. Suffice to say, I cannot recommend Space Flight: Orbital Emergency enough. 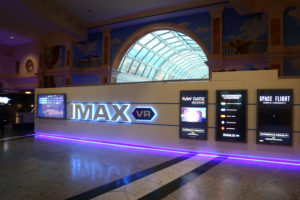 With the bar set high, my first true gaming experience – Eagle Flight Multiplayer – also didn’t disappoint. Doing what it says on the tin, this is a ‘capture the flag’ style multiplayer game crafted perfectly into a VR experience. As an eagle swooping through a superbly realised series of vistas, your aim is to capture your kill before the opposition and return it safely to the nest. Your progress is controlled via head movements tracked by the headset and an Xbox controller, mapped with an extremely simple set of commands which even gaming novices should be able to pick up. Eagle Flight is an incredibly exciting and competitive experience which is also fun to watch others play, given the use of body movement, especially when the pod sits next to the reception desk providing plenty of opportunity to laugh at those with their head in the clouds. 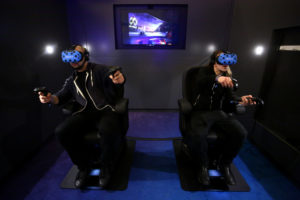 The remaining pods all required a more tailored VR control device, again easy to use and providing what is known as ‘haptic feedback’ to track your hand movements within the game world. Utilising this setup, I thoroughly enjoyed my time blasting enemies out of the sky while controlling a six-story mechanoid in Archangel. I also revisited my only previous VR encounter, Raw Data.

Here the trappings of the IMAX VR Experience came to the fore as I stood in a relatively large area with suspended equipment, which allowed me the freedom and space to swivel and dive. This illustrated just how immersive the VR experience can be with all elements of the tech combining to assault your senses, especially when the lights went out and the killer robots emerged from the dark. About those horror games…

There was also the four-player teamwork required to pilot a Federation Starship in Star Trek: Bridge Crew, with each player taking on a different role aboard a starship – either captain, helm, engineering or tactical. This is definitely one for all the family with this particular starship recently housing three generations of one family, the grandad apparently having a fantastic time as tactical officer. After a slightly embarrassing moment when I tried to rest my arms on the non-existent navigation console, I decided to hit the Justice League pod and then head for reality. 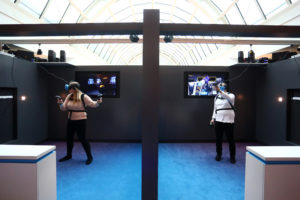 For me, Justice League VR, much like its film counterpart, didn’t quite live up to the promise. There’s no doubt that hurtling around in the Batmobile is fun, but the mechanics of the game suffered in comparison with some of the other options available.

Given you pay for each pod separately, it’s worth considering the type of experience you want before starting out. However, the breathless excitement and awe-inspiring moments I experienced left me in no doubt that the IMAX VR Experience has the potential to become a destination point for gamers and casual fans alike.

The IMAX VR Centre at ODEON intu Trafford Centre in Manchester is now open. For further information visit the website.