Somewhat surprisingly, this is the first time the estate of Enid Blyton has authorised an adaptation of the very English adventures of The Secret Seven.

For generations of children, their world has been a thrilling one, full of mysteries to be solved, passwords to be remembered, pets to be listened to and bad sorts to bring to justice. Splendidly, adaptor Glen Maxwell and Storyhouse’s artistic director Alex Clifton have remained true to this vision, ignoring any and all ‘lashings of ginger beer’ mockery but bringing just enough silliness and sweetness to Storyhouse’s first Christmas offering to make it terrifically entertaining for children and adults alike. 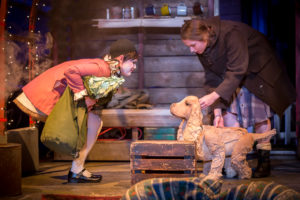 The ‘Christmas in Cherrydale’ village atmosphere is well set from the start with an excellent live band on stage throughout and community chorus carollers involving the well-behaved young audience. Our intrepid (and heroically colour-blind) septet – Peter (Harry Jardine), Janet (Harriet Slater), Colin (Kaffe Keating), Barbara (Molly Logan), George (Anton Cross), Pam (Aryana Ramkhalawon) and Jack (George Caple) – are seeking a mystery to solve for Christmas, despite the teasing interference of rapping girl power duo Susan and Binkie, a.k.a. ‘The Triumphant Two’ (Rebecca Birch and Tilly-Mae Millbrook). Blow me down, but along comes a vengeful burglar named Jocko (Nick Figgis) and his snivelling sidekick Nimms (Joel Sams) who evilly enlist circus acrobat Goldie (Evangeline Hartley) in a fiendish scheme to ruin Christmas for Cherrydale.

The plot seems a teeny bit on the complicated side, at least for adults, and it may be a little bit too long, but there’s enough derring-do, camaraderie, boisterous energy and moments of sheer magic throughout this vibrant show to more than make up for that. Courtesy of Matthew Hutchinson, there’s also a terrific puppet dog Scamper, who I defy even the most hard-hearted critic not to love.

Even if you somehow know nothing about The Secret Seven, or have forgotten how much you used to like them, this show is great festive fun.

The Secret Seven is at The Storyhouse in Chester until January 14, 2018.