Historical fiction isn’t my cup of tea. I like a trip down memory lane as much as the next person but when it’s packaged in something doorstop-sized, I quickly lose interest. It’s not that I’m a lazy reader, I just object to the extra weight in my tote bag.

So when I came across Australian author Angela Meyer’s debut novel A Superior Spectre, I was pleasantly surprised that not only was it (a far more reasonable) 272 pages, it also blended history with speculative fiction in a way that wasn’t contrived. While these two genres sound like they’d merge about as well as oil and water, trust me, it works. There’s no shoe-horning in of facts and each person is far enough removed from the historical counterpart who inspired them, or they’re a vague wisp of who and where they’re meant to represent. It all means that the narrative is free-flowing and I didn’t have to bother with details like who so-and-so was who worked in the Post Office 200 years ago (on second thought, maybe I am a lazy reader?).

It’s also a novel about time travel but there’s no mushy romance like Audrey Niffenegger’s The Time Traveller’s Wife (I loved the book, hated the film), rather it’s a dark tale of possession, madness and paranoia. There are two intertwined stories: one follows Jeff, who is dying, as he runs away from Melbourne to rural Scotland with a piece of beta tech that allows him to enter the mind of someone else; the other is set in the 1860s where Leonora lives in the Highlands. Her world is an overbearing, draconian society which limits how she moves and loves. Jeff, being the self-indulgent type that he is, exploits the tech, pops into the 1860s and infringes on Leonora’s life, mind and body.

It’s an extremely complex and compelling novel, one that I had to keep putting down and returning to. Having been compared to Margaret Atwood’s The Handmaid’s Tale, it’s as political as you’d assume. There are some truly brilliant and intricate motifs threading through the narrative and (again, like The Handmaid’s Tale) it’s a book you could return to and find something different each time. But, for me, the over-arching questions are those of autonomy – particularly those over the female body and mind. The patriarchal structures are violent, suffocating, voyeuristic and limiting, and parts of the narrative serve as a chilling metaphor for today’s society.

During the Manchester stop of Meyer’s UK book tour, held at Blackwell’s Manchester and chaired by Jane Bradley (For Books’ Sake), I was eager to hear the inspiration and process behind A Superior Spectre and how the story came into being.

“I didn’t want to have a female hero who was searching for something,” says Meyer. “I wanted her to know herself in the beginning and it’s more getting back to that.” 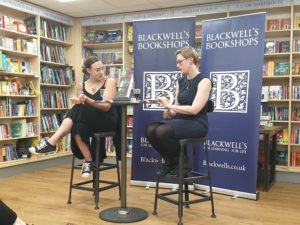 That sense of female autonomy is so powerful in the beginning, and Leonora is such a vibrant character that it’s painful to witness her railing against the stringent patriarchal structures which serve to smother and stifle. Interestingly, these values come in the form of her context, the 1860s, but also from an usurper, a future form of patriarchy that she desperately tries to escape. Jeff, the parasitical man invading Leonora’s mind and sanity (what a wonderful metaphor for the patriarchy) isn’t a monster (well, not completely as Meyer gives him enough back story and depth to explain his voyeuristic and self-indulgent nature – a comment on toxic masculinity, perhaps?), he’s an abuser.

For Bradley, the book is also “very queer”. Not just in content but because “it is queering genre boundaries”. Meyer replies that her writing is “profoundly bisexual”.

While A Superior Spectre centres around a man inhabiting a woman’s body, for Meyer it’s more than that. “There are always binaries that I play with such as city and country, mind and body. I am always interested in the grey areas between these distinct things. I am much more drawn to the grey areas. I think some reviewers have been afraid to go there. Probably because the book also has a character who is a predator, so it gets a little blurry, but I like blurry.”

It’s this blurring and morphing of gender, self and morals that I enjoy most in the novel. Sex and sexuality are explored in all their complexities and nuances. Bradley asks if this was foremost in Meyer’s thinking when developing the novel, to which she replies that it was so dominant that “they had to cut a lot out”.

She says: “I hadn’t allowed myself to write that much sexual desire before. And I was trying to push myself. I had to pare back a bit and balance it as well, but I think I am fascinated by sexual desire, but also just desire in general because a narrative tension can come from the things that people desire and can’t have or, more interestingly, won’t allow themselves to have. The binary of desire is fear which of course is also one of the most interesting things to explore as a writer.” 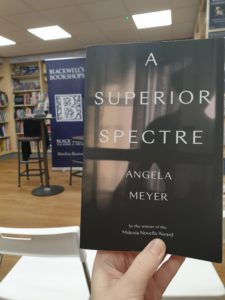 The novel is wonderfully layered and with Meyer’s impressive CV, it’s hardly surprising that she has produced such a thoughtful first novel. Not only is she a writer, author and poet, Meyer is also a successful publisher who is behind many award-winning and internationally published Australian books, and a global number one bestseller (and yes, I know which one).

“I was a book reviewer as well,” says Meyer. “So, I was reading a lot and doing that sort of deep reading.”

“You’re a multi-talented writing polymath,” adds Bradley, and everyone laughs. “How do you know when you’re in development which form it’s supposed to be?”

“I do mostly know from the beginning that an idea is a sort of shape,” replies Meyer. “The novel was always much bigger. It’s the complexity and the layers.”

So, her advice for aspiring writers? “I had to do a lot of writing and reading until I had the confidence and the instinct that it was worth following. It was reading, reading, writing, writing, and there was no shortcut, so my main bit of advice would be patience and a sort of seriousness about it, knowing that you do have to continually and deliberately gather and practice. You will know when it starts cooking.”

With a debut novel and scooping the inaugural Mslexia (UK) Novella Competition for Joan Smokes (available in ebook and print in December 2019), things are certainly heating up. 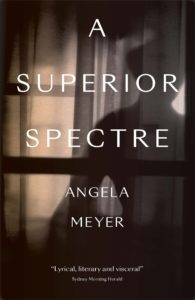 A Superior Spectre is published by Saraband and available to buy now.