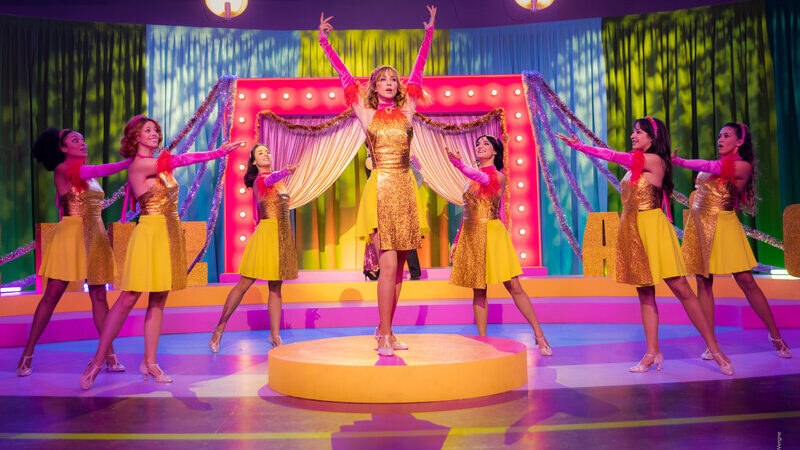 The anglicised title of Explota explota, a generous-spirited jukebox musical about Francoist Spain and dancing, is an irresistible invitation to declare, almost without shame, that the ¡Viva! 28th Spanish & Latin American Festival at Manchester’s HOME opens with a bang. Or should that be a ‘pop’?

If Raffaella Carrà, the artist whose songs around which the film’s plot pivots and who died last year, is remembered in the United Kingdom at all, it’s on the basis of her solitary hit on our insular charts, a glorious three minutes of Baccara-adjacent Europop, the winningly eccentric Do It, Do It Again. By contrast, in her native Italy, and in a Spain which opened its arms to her, she was singer, dancer, actor, model and television presenter, and inarguably a star.

As living proof of this, Uruguayan debut director, Nacho Álvarez, who made a brief appearance at HOME to introduce his debut feature, proudly unveiled his bicep tattoo, inked over the recently deceased Carrà’s autograph.

Having shunned Mamma Mia! as sacrilegious, and We Will Rock You as containing the hits of Queen, it’s intriguing to see how this musical functions without the frisson of nostalgic familiarity. The answer, it turns out, is rather well. Of course, it helps that a large percentage of Carrà’s back catalogue is gratifyingly tremendous, a trove of disco treasure that it’s a delight to disinter. For instance, Bailo, Bailo has something of the heart-stopping exuberance of ABBA before the divorces. 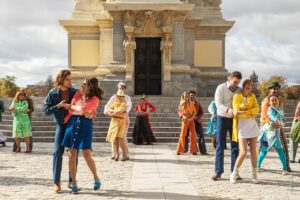 Equally as important, it never feels as though they have been shoehorned into a plot whose glass slipper they simply don’t fit. The rocky urgency of Rumore fits a scene of crisis between the protagonists.

Beyond its soundtrack, Álvarez’s confection is assured enough to own up to the ingredients from which its unique recipe has been devised. Roman Holiday, for instance, is referenced throughout, and, while Juan Carlos Gomez’s cinematography draws upon a vivid palette of saturated 70s signifiers in striking contrast to its monochrome touchstone, physically, at least, Ingrid Garcia Jonsson’s gamine Maria and Fernando Guallor’s solidly handsome Pablo play to the types of Hepburn and Peck. 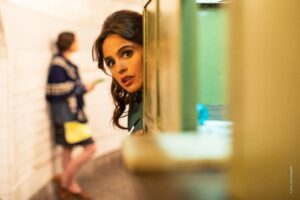 Jonsson, in particular, makes for an appealing presence, with something of the almost balletic ranginess of Rita Tushingham in a swinging 60s comedy, suggesting just enough melancholy to ground her more comedic moments. Befitting her name, and with a further nod to the spoons full of sugar in Explota’s mixture, her Maria was raised in a convent, where she was, of course, forbidden to dance. Her equal is the more redeemable of the film’s two villains, Fernando Tejero’s Chimo, a stock womaniser resembling no one so much as a Latin cousin of Matt Berry’s Steven Toast.

Chimo is director of the television show into which, by the usual conventions of romantic comedy, Maria pratfalls, becoming one of the Rosettes, a light entertainment dance troupe who strut their stuff on national television under the exacting scrutiny of a state censor with one eye on their hemlines and another on their cleavage. 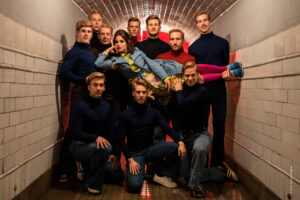 Of course, the man being groomed to succeed his father in this position is Pablo. Will he stick to the party line, cutting his lover out of the broadcast for her indecent lack of convention, or will he follow his heart?

If the ending is never really in doubt, the film’s delights lie in how it arrives at its destination. Much like its spiritual kindred, Baz Luhrmann’s glorious Strictly Ballroom’s emotional heft (there will be tears of joy) derives from the charged thematic connection it draws between the courage to pursue artistic freedom and the liberty to live, and love as one chooses.

Let the glitter cannons fire. To borrow the lyrics from another one-hit wonder of the 1970s, Y Viva España!