AL and AL: Incidents of Travel in the Multiverse

Helen Nugent February 4, 2016 Art, Arts Comments Off on AL and AL: Incidents of Travel in the Multiverse

Bren O’Callaghan, co-curator of AL and AL’s new exhibition at HOME, writes about this major new show in Manchester.

An agent for lost souls journeys to the land of the dead to free the spirit of a slain hip-hop singer. A child model is chauffeured through a mid-west paparazzi safari, punctuated by Princess Diana’s overturned car wreck. Britney Spears colludes with the lamb of God in her frenzied quest for immortality.

Such are the unique, fever-dream visions of artist duo and film-makers AL and AL, with whom I have spent the past two years producing and curating their newest commission and landmark solo exhibition for HOME in Manchester – AL and AL: Incidents of Travel in the Multiverse.

Serendipity and coincidence form two sides of a falling coin that guides this duo’s path. Having met in Derek Jarman’s garden in Dungeness, Kent, the pair discovered they shared not only first names, but second names and third names, with a great many peculiar happenstances to follow. Both sons of the North, after graduating from Central Saint Martins the pair have gone about quietly and conscientiously fashioning a unique, multi-award winning practice that draws upon blue screen technology, generating astonishing CGI environments – often casting themselves within the un-spooling fantasies – characterised by a research process that would shame a notation-addicted academic. 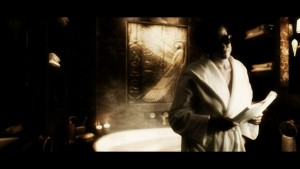 AL and AL’s relationship with HOME began in 2011 when Cornerhouse put out an open call in collaboration with the Abandon Normal Devices Festival to commission an experimental short film on the occasion of the centenary of Alan Turing’s birth. Widely recognised as the father of computer science and progenitor of studies in artificial intelligence, Turing’s personal life was as tragic as his achievements were great.

Upon submitting the chosen proposal, AL and AL went on to defeat expectations by delivering The Creator, a 40-minute fantastical allegory drawing upon Disney’s Snow White, the crucifixion of Christ and Merchant Ivory version 3.0 to create an alternative retelling of Turing’s final day. Visited by intelligent, thinking machines from the future who journey through time on this most auspicious of dates, this Lynchian nightmare laced with a drowsy sense of auto-erotic sacrifice went on to debut at the Museum of the Moving Image in New York, winning the Prix du Jury at the Utopiales Film Festival. 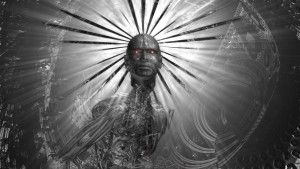 The Creator plays in its entirety within the HOME gallery, accompanied by companion piece Superstitious Robots which was commissioned by Channel 4 for Random Acts. And there’s an adjacent Divination Room housing an eerie and prophetic robot-tarot in reference to Turing’s visit to a fortune teller in Blackpool in the months preceding his death. Turing himself remained silent on the matter but AL and AL contribute to the expanding myth around the man whom they posit as a godhead, father of a future race.

Turing is just one of three key scientists in response to whose work AL and AL have conjured three lead journeys throughout the exhibition.

Icarus at the Edge of Time is a live concert hall experience, based upon the children’s book by Pulitzer Prize-nominated physicist and writer, Professor Brian Greene. Re-appropriating the Greek myth of the boy punished for flying too close to the sun using wings fashioned from feathers and wax, Greene takes the action to outer space to explain the nature of black holes. The acclaimed scientist will be present at the Royal Northern College of Music on Feb 6 to narrate the tale live, accompanied by visuals from AL and AL, a unique score by Oscar-winning composer Philip Glass, and music from the BBC Philharmonic. Unsurprisingly, it’s a sell-out, but elements of the experience appear in the gallery in the form of a dazzling three channel video triptych.

Meanwhile, The Demiurge, newly commissioned by the Wellcome Trust and receiving its world premiere in Manchester, springs from research conducted by Dr Bart Hoogenboom at the London Centre for Nanotechnology. Using an exceptionally powerful atomic force microscope, Hoogenboom has captured the first real photographs of DNA and is able to touch and ‘stroke’ individual strands using a specialised tip. Unlocking a new era of molecular authority, AL and AL fuse fact with limitless human ambition using a tale of a murdered actress and her grieving husband, a scientist driven by pain and an otherworldly, possibly extra-terrestrial presence, to clone his lover. Actress Sophie Linfield is astounding in her hypotonic portrayal of more than a dozen different roles, often playing against or in dialogue with another of her many selves. 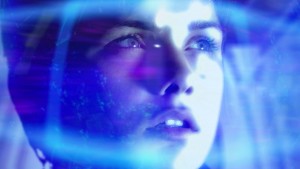 A publication accompanies the exhibition. It’s not a catalogue but a standalone work bursting with imagery and an insight into the working methods and diaries of the artists themselves. Part instruction manual, log-book and dream dictionary, the contents form an origami lotus that unfolds ever-outwards to create a map to a multiverse of many dimensions. This is where linearity and the confines of flesh have been superseded by string theory and disembodied spirit. Featuring an introduction by Greene and essays by mythographer Marina Warner and legendary graphic novelist Grant Morrison, it is a portal bound in print.

Science is not an alternative to art. Instead AL and AL have achieved a creative form of cold fusion and built spectacular worlds riven by human emotion, those of desire, need, hope, fear, love and longing. It’s not so much staring into the void as standing upon a diving board above it. AL and AL join hands and leap into the unknowing beyond. 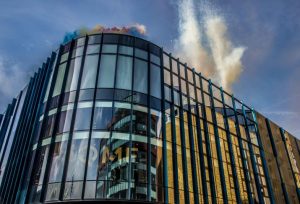 AL and AL: Incidents of Travel in the Multiverse curated by Bren O’Callaghan and Sarah Perks is at HOME from February 6 until April 10, 2016. Icarus at the Edge of Time at the Royal Northern College of Music on February 6 is currently sold out – contact RNCM box office for returns only.

Incidents of Travel in the Multiverse, the publication, is available from the HOME Shop or can be purchased online.