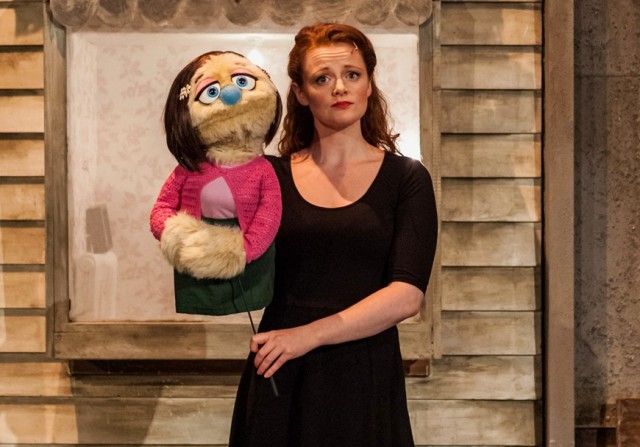 In America during the Great Depression there was a huge underground market for so-called ‘Tijuana bibles’, small bootleg comics which depicted the family-friendly cartoon stars of the day – Popeye, Dick Tracy – getting up all sorts of rude, adult and not at all family-friendly things. It’s a grand old tradition, then, which is being rewired for modern times here.

Avenue Q – it’s the setting as well as the title – is a run-down slum borough populated by down-at-heel people. And puppets. By any other name, it’s Sesame Street gone to seed. We first see it though the eyes of Princeton, a wide-eyed graduate puppet who moves in and and starts getting to know the neighbours. There’s Rod and Nicky, two male puppets who share an apartment in the face of widespread scurrilous gossip; Brian and Christmas Eve, a live-wire human couple; frustratedly single young Kate Monster, and reclusive old sleaze bucket Trekkie Monster. Princeton’s at a crossroads in his life, trying to figure out exactly what he’s all about and in the meantime local matchmakers are trying to pair him off with Kate.

First staged 11 years ago, Avenue Q has built up a devoted following and is currently on a UK tour which includes the Palace Theatre in Manchester. Aside from the puppets, its biggest weapons are a volley of risque comic songs, including It Sucks to be Me, Everyone’s a Little Bit Racist and The Internet is for Porn. They’re great fun and the whole show is performed with some serious gusto. The puppeteers are black-clad but remain in full view, so effectively you’re watching the puppets and their players at the same time. Lead players Tom Steedon and Lucie-Mae Sumner have got this down to a fine art. It’s giddying to watch and very entertaining. There are really only a few moments when the show pushes its luck a bit and risks being crass and icky, full-on Tijuana bible style. At heart, it’s actually a very sweet tale, which hints gently towards the sort of life lessons we need when becoming an adult, as opposed to the more basic ones we need during childhood. 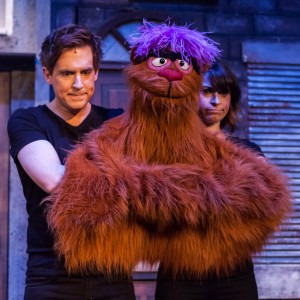 If there’s a down-side, it’s that it doesn’t have a great deal of onward momentum. Once the novelty has worn off, there’s not that much to engage with. Now, no-one ‘s expecting a grown-up stage spoof of Sesame Street to rival King Lear for depth and meaning, but it does lack an involving quality to keep the interest up for over two hours. By the second half, when diminishing returns start to set in, Princeton’s increasingly desperate quest for purpose and meaning could be read as a post-modern critique of the show itself. The puppets, unsurprisingly, are basically one-dimensional, and there’s not much of a plot to speak of, either. The resolution you can see coming from the opening scenes just sort of happens. Slowly. The songs are pretty good, but few really make their mark, and those that do feel shoehorned in, developing neither the characters nor the narrative. It’s just as well that they’re so funny.

To be fair, the whole ‘Muppets go gonzo’ idea has been done before, with absolutely no holes barred, by none other than Sir Peter Jackson in 1989’s Meet the Feebles. Avenue Q is certainly far more funny and likeable than that, but there might be a danger that it’s already heading past its sell-by date. The generation that grew up watching Sesame Street are getting on a bit now and before long it’s not going to mean an awful lot to younger theatregoers. Meanwhile, the Muppets have recently made a triumphant comeback to the big screen, with knowing humour and terrific songs intact (if you’ve never seen 2011’s The Muppets, go to it this instant- you’ve got a fabulous evening ahead of you). Indeed, some Avenue Q personnel have now graduated up to working on the Muppet movies. So with Jim Henson’s original inspiration now back in business, this mischievous homage, for all its skill and charm, could start to seem like an anachronism very soon. For now it’s a blast, but it’s no stone-cold classic.