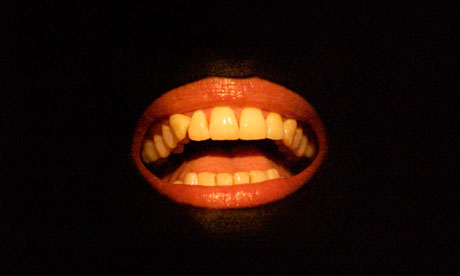 Friends of mine tell me two things about the colour black and its significance in theatre and performance. Chief electrician at The Lowry, David Clare, informs me that, “we [The Lowry technical department] have worked very hard to get a complete blackout,” and that I should “enjoy my sensory deprivation”. This alone is enough to get my theatrical juices excited. Then, my escort for the evening, artistic director of visual arts at HOME, Sarah Perks, informs me that, normally, when their artists have asked for a “complete black box” it’s been impossible due to all sorts of health and safety prerequisites. All this means that tonight’s offering is unusual.

There is an announcement informing the audience that there will be complete blackout in the auditorium and that, if there is a need to vacate, we must raise our hands and a member of staff will escort us out. Excited much? Yes. Especially as one astute audience member wonders, out loud, how on earth the staff will be able see us. There is a whisper about the usage of Bond-like night-vision goggles.

Then, the lights dim and, yes, we are plunged into absolute blackness. Black – who knew it could be this black. We’re not used to it. I’m talking eerie blackness, the sort of black that nudges all the other senses into overdrive.

Then, a low ghostly hum bounces about the space and a voice, quiet at first, gradually louder, then a tiny spot of light growing in brightness, then the mouth – the red mouth, suspended in the darkness, floating and then the words, “…out…into this world…this world…tiny little thing”. It splutters and shouts and laughs. This mouth speaks at speed and for the nine minutes or so that Not I is performed, it feels like a dream or a nightmare. Is the mouth making any sense? What is it saying? Then I remember what the performer, actor Lisa Dwan has told me about performing Beckett,

“There’s no other playwright like Samuel Beckett. No other playwright demands so much. Every single cell is employed. The characters he writes are more like creatures. I don’t really feel like a woman. I feel like a slice of life. It’s very expansive. I play all ages from old women to young girls. I’m playing a subconcious. It stretches me as an actress, obviously but it also challenges me as a person. It’s an utter privilege to do something so big. So often you get these parts where you’re asked to be a vacant blond or a cardboard cut out and I can’t get over what is available for me to play here.” 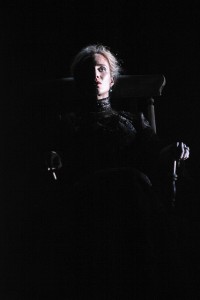 Lisa Dwan was born in County Westmeath, Ireland in 1977, long after Billie Whitelaw first performed Beckett’s three pieces. She originally trained to be a dancer and moved into acting later. She performed Not I at the Battersea Arts Centre in 2005. Asked about her venture to Manchester, Dwan says: “I’m touched by artists from Manchester like my friend Lemn Sissay (poet, author, broadcaster and Lancastrian). I am touched by the raw artistic landscape here and the cultural hub. I want to get along to the galleries. I’d love to meet some of the artists. I’ve been hearing about the art scene in Manchester for ages and personally I don’t think national coverage reflects what is going on in the North.”

Her eloquence, broad interests and thirst for knowledge is clear when she begins to explain the Beckett pieces.

“Not I is in oldest terms a representation of thought. It’s extremely difficult to learn for a start. I have to practice it three times a day wherever I am. I don’t hear it as strict linear, I hear a cacophony of the voices of home, voices of Ireland and each word has to be spoken correctly and succinctly and you have to employ huge verbal dexterity and precision and each word is spoken fast. Each word has to be clear and heard and is given its allocation in space and time. It’s like the most extreme musical allegro.

“You approach [the piece] like you were a musical instrument. You have to be highly tuned, you have to be lucid and fluid and sharp and totally on your game. It’s not for you [as performer] to be curator or get involved or be vain. Acting it, you have to be emotionally clear and honest and not reliant on the old actor tricks like your voice. He [Beckett] summons terror and that terror is very, very real.”

It is unusual to leave sense and rationale at the door, to be able to leave preconceptions behind and be immersed in a rambling. The next piece, Footfalls, also has a musical quality to it, too. A strip of light on which a woman dressed in white paces up and down gives the effect of a metronome while an unseen voice of the mother speaks. May, the woman, paces and speaks, paces and speaks and a bell tolls. It’s hypnotic and elegant with a precise and measured delivery from Dwan who portrays the isolation of the character and the impending doom which awaits her.

“Footfalls is normally performed by two actresses, an older woman playing the mother offstage and the daughter onstage,” says Dwan. “In this production, I play both roles. I recorded mother’s voice and there are moments when I say mother’s lines live on stage. It’s an exploration of psychosis and oppression. The lighting and the pace and the mother’s voice make it like a chamber piece of music. The rhythm is so important. You can’t push it. You have to invite the audience into this quiet, intimate space in your mind. It’s difficult to do in some of the bigger theatres.”

The finale, Rockaby, is extraordinary and moving. It is an achingly beautiful and terrifying summation of someone at the end of their life, and, as Dwan puts it, is about “a woman rocking her way towards the inevitable in life. It’s a deep, difficult piece. It packs an emotional punch.”

Stripping the language back to its essence has the effect that it is, in part, meaningless but it is the visceral intention behind the words which makes it universal. 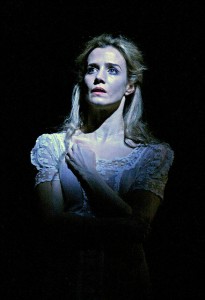 “Beckett”, Dwan explains, “would laugh at people who over intellectualise his work. His work is deeply emotional and immersive. My advice would be to leave your intellect at home. His work is available to anyone in any language. His work is music. My nieces are seven and 12, they saw it and said, ‘she’s mad, look what her mind is doing’.” Best review ever, I suggest. She goes on: “I was rehearsing all those years back in Battersea and I’d gone to rehearse in Battersea Park and I lifted my blindfold and had collected an audience of park bench drunks, totally immersed in the performance. He’s very immediate. He’s a visual artist and a performance artist with the combination of music and performance art.”

Asked if Dwan will miss performing the pieces when she finally hangs up her Beckett boots, she responds: “They are part of me. I don’t think they’ll ever go now even when I stop performing them. You create them in your nervous system. Me and Billie [Whitelaw] perform them so differently and Not I for example keeps changing. I first performed it in 2005 and it’s different now. Life experience and so on means it’s ever changing. I don’t think I want to perform it after next year. Not I is so taxing. My mother says, ‘a comedy next otherwise you’ll be like Joan Crawford’.’’

The infamous review of Beckett’s best known play, Waiting for Godot, was by theatre critic, Vivian Mercier. “A play where nothing happens, twice,” is almost as well-known as the play itself. Tonight, nothing happened but it was a happening. And a writer who understands nothingness sheds light on even the blackest of black.

What: Not I, Footfalls & Rockaby