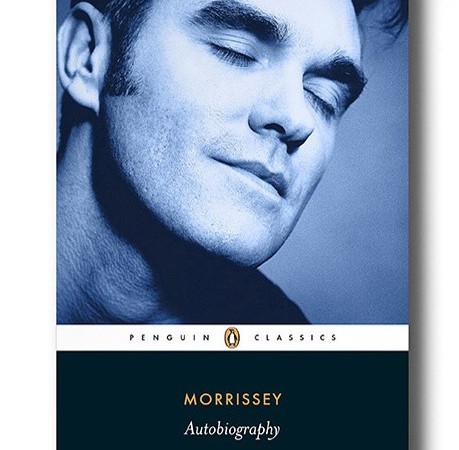 Rejoice! A leading British publisher has brought us a book by a member of a great modern British band, someone who can write skilful, balanced prose which demonstrates an encyclopedic knowledge of his chosen field of home-grown pop, particularly the pre-Beatles era. It’s quite a book.

Not this book, obviously. I mean Yeah Yeah Yeah by Saint Etienne‘s Bob Stanley, which is terrific. You should definitely read it. Morrissey‘s autobiography is a very different kettle of fish.

Even before this came out it’s been drawing attention to itself. It’s said that, as part of his publishing deal, Morrissey insisted that his book should come out on the Penguin Classics imprint, and that when Penguin dithered over this point, Morrissey threatened to pull the deal. He’s got form here, having brokered deals with record companies whereby long-dormant labels – HMV, Attack  – are revived especially for him. But still, the chattering classes have been stoked up by the prospect of Morrissey sharing a hallowed publishing imprint with the likes of Dickens, Aristophanes and Tolstoy. There’s a school of thought that it’s just a joke, but surely that would imply there was a funny bit.

And really, was there any guarantee that his book would work at all? Though acknowledged as one of the sharpest lyricist of his times, Morrissey has no track record with prose, not since he wrote over-excitable letters to the NME letters page in the late ’70s. In terms of music, his quality control, particularly in his solo years, is notoriously iffy. Plus, can you really expect a well-balanced account from someone who has been tarred by a High Court judge as – altogether now – “devious, truculent and unreliable”?

But now we have Autobiography by Morrissey (so titled, we presume, because A Heartbreaking Work of Staggering Genius was already taken). Obviously, the autobiography form pre-supposes that the reader is as interested in the writer’s trials and tribulations as he is himself, which suits Morrissey to a ‘t’: it’s been his MO all along.

But it’s not great, not by any means. The first third in particular is a real slog. Morrissey’s younger years have always been presented as the key part of his story, creating his persona and forging his tastes more even than most. He presents them here as a grim-as-buggery Gothic novel, not unlike Mervyn Peake documenting ’60s Hulme and ’70s Stretford, in which his family are pretty impoverished and his schooling is pointless and brutal.

Now, this stuff might be vital to his tale, but there’s a huge amount of it and it’s unbelievably stodgy in the telling. It’s delivered in wildly overwritten first-draft fanzine prose, complete with puns that would make a teenager wince: “fashions passion”, “frightening lightning”, even – brace yourself – ”What drove Oscar wild?” Morrissey can’t resist a cringeworthy habit of dropping in references to his own lyrics, like his own biggest bequiffed fan. Tenses tend to slalom about a bit. It’s replete with curious presentation choices, too. American spellings are adopted throughout. Song titles are given not in title case, as as the norm, but italicised – Hand in glove, for instance. All direct quotes are italicised, too. But to what end, other than to indulge the writer’s whim? There are no chapter breaks, and even paragraph breaks are in short supply, particularly towards the start. It isn’t a book which invites the reader in at all.

There’s no real forward momentum, either. It’s like a novel in which our protagonist hates everyone and everything, including himself, and openly longs for death. Whether you can cope with this depends on whether the atmospheric, evocative but hugely subjective picture Morrissey paints here has you engrossed and elicits your deepest sympathy. Because he’s not always doing himself favours on this point, either. He rages still about the treatment meted out to him at school, but some of his examples might leave you cold. He’s teased for putting a blonde streak in his hair. He’s punished for confessing to a teacher that he skipped lessons to attend a Roxy Music gig. Is he really surprised?

The book, and his life, picks up immeasurably when Morrissey meets Johnny Marr and forms The Smiths. Suddenly the clouds part and the book has a lightness of touch and a spring in its step, with the sort of witty, catty anecdotes that you’d wanted all along. We’re not entirely home and dry, though. The bulk of of what unfolds concerns Morrissey’s dealings with the music business, railing bitterly about Rough Trade boss Geoff Travis, distribution problems, aggravating press coverage and underwhelming chart placings (He’s obsessed with chart placings, actually: they’re mentioned and remarked upon for every album and single release throughout his career. Has it never occurred to him that Shakespeare’s Sister for instance, while beloved by many, just isn’t whistled-by-the-milkman Top 10 material?).

There’s a draining solipsism here which dogs the whole book. Important figures – friends, the members of The Smiths, other musicians – are introduced at the appropriate point and then sent packing when the time comes. In between, he’s never actually shown interacting with them. It’s as though they’re extras in his story, standing silent at the back for a brief allotted moment. None of The Smiths’ material illuminates his experience of being a member of the band. Nor does he talk about any of the practicalities of his song-writing partnership with Marr. Songs just seem to happen. Later, significant musical collaborators from his solo career – Vini Reilly, Mark Nevin – don’t so much as merit a mention.

The momentum wavers thereafter, taking in a number of baffling, unrewarding detours, before grinding to a near-halt again when we reach the celebrated 1996 court case brought against him by ex-Smith Mike Joyce. What follows is an unflinchingly grotesque blow-by-blow account, a torrent of invective, not stopping short of criticising the faltering delivery and physical shortcomings of his foes in the courtroom. There are more than 40 pages of this stuff. Imagine being collared by an old friend one drunken night, and him keeping you up until the early hours with an interminable, bitter account of his divorce case. Think that, but in prose form. By way of comparison, there are only around 80 pages about the whole creative lifespan of The Smiths. The divorce of Morrissey’s parents while he was a teenager, surely a massively important event in his emotional development, is dispensed with in about two sentences, before transmuting into a detailed discussion of the acting style of TV star Peter Wyngarde.

There’s a very strong whiff of hubris to the whole enterprise. It could easily have been so much better, with firmer editorial guidance from Penguin and much more self-discipline from the writer. In the event, of course, that didn’t happen. What we’ve got is certainly fascinating at points, but probably for all the wrong reasons. Morrissey remains a fascinating character, and armchair psychologists will have a field day with the insight it lends us into how his mind works. It’s an extended exercise in self-pity, which could usefully have been called Who’d Be Me? – or, I Haven’t Half Had It Rough. So if quotes such as this  – “It is a fact that even warming moments overwhelm me with despair, and this is why I am I” – float your boat, then yes, you may find much to divert you here. And in truth, it does have some amusing, poetic, diverting moments. But it’s certainly no classic.