Kevin Bourke October 27, 2015 Arts, Theatre Comments Off on Blanche McIntyre on The Oresteia at Manchester’s HOME

With the benefit of hindsight, it looks as if theatre director Blanche McIntyre, the golden girl of the theatre world who is about to bring The Oresteia to Manchester’s HOME, might have been destined for her current job.

“My parents used to take me to the theatre, ballet and concerts all the time, from when I was about six or seven,” she recalls. “I didn’t always get it but I found it fascinating. I also spent most of my time in primary school trying to put on and be in plays, but I didn’t really make the distinction between playing in the playground and playing in a drama lesson. Now, I think there may have been some value in that.”

The best bit of advice she ever received, she reckons, was “when I was still a child, my mum said make your hobby your job. All jobs have tough times and you’ll be doing it into old age, so find what you love and do that, then you’ll always get something out of it.”

Although McIntyre’s first paid directing job was only three years ago, the 34-year-old has had her card marked as a talent to watch for a while.

By 2012, she had already won the Critics’ Circle award for most promising newcomer, and she’s worked with such highly regarded outfits as Headlong, Out Of Joint and English Touring Theatre, as well as Manchester’s Royal Exchange (on Pinter’s The Birthday Party) and at Shakespeare’s Globe. When Walter Meierjohann was just about to start as artistic director: theatre at HOME, hers was one of the first names to come up as someone he thought they should be working with.

“I’ve followed Blanche’s work over the last few years and been very impressed by her in-depth work with actors and her sense of invention,” he told me back then. 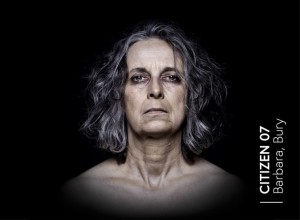 But Meierjohann was a bit taken aback, he admits, when McIntyre’s first production suggestion was The Oresteia, often referred to as the Mount Everest of theatre productions by virtue of its sheer scale and several thousand years of history. Still, he bravely gave it his blessing and this, it should be noted, was quite some time before the two, highly praised recent productions in London. Now North West audiences are about to see the fruits of his faith.

Talking to McIntyre, particularly as she’s taking a break from the intensive rehearsals for this ambitious production, can sometimes feels a little like trying to stand upright in a fast-flowing river. Her enthusiasm, energy and ideas are refreshing and invigorating, but you have to watch your step, as she’s also listening carefully to everything you ask her as well as paying surprisingly keen attention to the conversational asides.

“It’s the fountainhead of Western drama and so people look at it with awe and respect, but also with terror. For me that’s a very good reason to tackle it,” says McIntyre when I ask her what precisely made her want to direct The Oresteia at this stage in her career.

“You’re right, of course, it is like the old question, why do you climb Everest? Because it’s there. Why stage The Oresteia? Because it’s huge and it’s the first, the opening of Western theatre. So of course you want to touch in with it regularly. Every piece of theatre I do feels more difficult than the one before. I don’t think you should ever take on something where you think, ‘oh, this one will be easy’. Then you risk doing a boring job.”

“The Oresteia,” she enthuses, “marked the beginning of drama as we know it and has themes running through it which have formed the bedrock of so much drama during the past 2,500 years. A family locked in a cycle of bloodshed, the legacy of a brutal war, the first-ever court case, the invention of justice, the clashing principles of kingship and the good of the people…they’re all there in The Oresteia.”

Her production is based on Ted Hughes’s translation and condenses Aeschylus’s epic trilogy into one play, with a running time of 100 minutes. McIntyre has a double first in Classics from Oxford to her name so she brings a real depth of knowledge to the production which utterly belies any hint of dumbing it down for a contemporary audience.

“It has so much to say about life as it’s currently lived,” she insists of the 2,500-year-old play. “Every time over the last few years when I’ve talked to people in theatres about what they might want to stage, everyone says they want to go back to the Greeks. If you do want to do the Greeks, I think you should go all out and, because The Oresteia is the big one, I suppose people have thought, let’s go for that one. 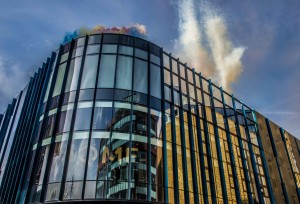 “Although I feel as if I have to remind everyone that we were actually the first ones to programme it.

“Over the last couple of years, it feels as though theatres in general have been feeling the need for something uncompromising, tough, extreme and emotional. When you look at some of the video recordings of the refugees who’ve come over from Syria, the emotions that they’re showing are identical to the Greek tragedies.”

She adds: “It’s only when the suffering of the injured parties are acknowledged and respected and some kind of recompense is made that it’s possible to go forward. The story has parallels both in conflicts across the globe and in truth and reconciliation commissions. It’s not that we feel less now, it’s just that we don’t regularly have a way of processing that in the theatre. But Greek tragedy is a way of doing that, so in the face of huge events it seems to be something people turn to.

“The difficulty with Greek tragedies is that audiences now think about theatre in a very different way to the way that Greek audiences did. So for a Greek audience a full day festival of theatre as a way of questioning the way that they collectively looked at the world was their sacred duty and something that they approached rather like Prime Minster’s Questions crossed with a religious observance. So they would go in expecting to tackle these issues over an enormous period of time, whereas I certainly don’t expect our audiences will be coming with that expectation. So some of the things I’ve done with the play are attempts to put the audience back into that mind-set. But I’ve condensed it to make it more intense and to make the action flow more smoothly.”

Not only has McIntyre retained the chorus – a concept that’s often considered just the wrong side of hilarious these days – she’s actually using a 50-strong community chorus.

“Oh that idea of the chorus has been in disrepute, I know, for years,” she laughingly acknowledges. “But in a perverse way that’s why I think it’s so important to honour it.

“The thing for me is always the strange bits of the play that make it not just your average two people sitting on a sofa muttering about life. The bits that stick out and snag your attention, what Jonathan Miller calls the knucklebones, those are the bits that are probably closest to human experience as it is, because human experience is rough and absurd. They are the important things about the play, the things that make it different.

“The Oresteia is a great civic drama. It is about movement from government by family to the will of the people, and about the movement of humans from primeval darkness into light. It feels right to be doing this in Manchester, a great city with a long, noble, and continuing history of agitation for the greater good.

“This is why it is important for the production to centre around the voice of the citizens of Manchester. The people are the central driving force of each play, and our chorus form a key element of the production.”