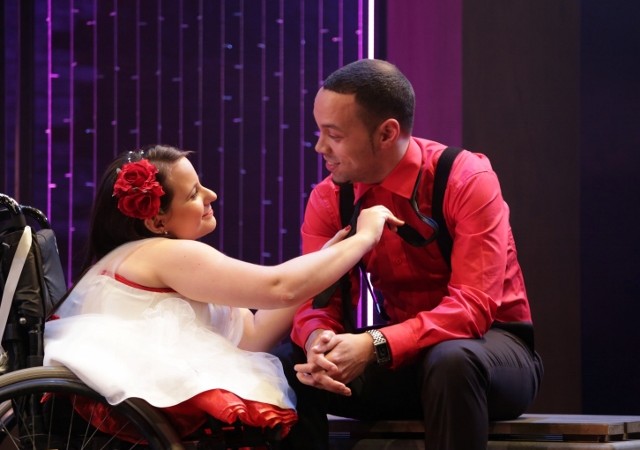 The arrival of Graeae Theatre Company at Liverpool’s Everyman is a matter for celebration. As the company is dedicated to “placing deaf and disabled artists centre stage,” the unforgiving old Ev – with all the ease of access you’d expect from a patched up Methodist chapel built on goodwill and hope – was strictly off limits. The new building, on the other hand, was designed from the basement up to be fully inclusive, and so finally Graeae can move in.

The company’s Write to Play initiative is the subject of a continuing series here on Northern Soul and they are known for their innovative, accessible work. But does their new version of Federico Garcia Lorca’s fiery Blood Wedding (co-produced with Dundee Rep Ensemble and Derby Theatre) trigger the kind of passion-filled party we might have hoped for?

Whereas Lorca’s 1932 play is set in rural Andalusia, this adaptation by David Ireland brings the action right up to the minute, placing it in an urban world of Strictly Come Dancing and Emmerdale. Two families are about to be joined in matrimony thanks to the marriage of son Edward to daughter Olivia, but we soon discover that the families are linked in more ways than one, with Olivia’s not-very-secret affair and a past gangland killing leading to suspicion and whispers rather than bonhomie and joy. So far, so Eastenders.

The soap-style contemporary presentation shouldn’t necessarily wear away at the play’s integrity, as wherever there is love and marriage there can be unfaithfulness and revenge. But whereas vintage Corrie could have you on the edge of your seat – think of the cobbled street chest-beating of Mike Baldwin versus Ken Barlow for instance – this show simply doesn’t have that power, and more often seems filtered through sitcom, even farce. By the time things should be getting truly dark, we’re not sure whether we’re supposed to be watching Greek tragedy or a lost Alan Ayckbourn; comedy can easily turn black, often successfully, but in this case the transformation just doesn’t convince. The result is laughs that aren’t really that funny, and torment that doesn’t really rend the soul. 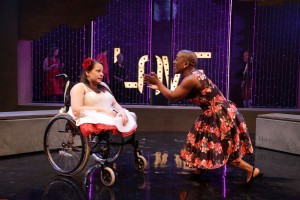 Not that this Blood Wedding doesn’t fascinate. True to Graeae’s philosophy, there are many ways to access this production, whether via hearing or sight, sign language or audio description. Not only are these various techniques completely integrated with the staging, which remains fluid throughout, they are also fundamental to each actor’s characterisation.

For example, during conversations between Agnes (EJ Raymond) – who is profoundly deaf both in character and in life – and her son Edward (Ricci McLeod), the audience must flit between surtitles and speech, between expression and movement, selecting the source that best fits their own range of receptors. In this show, audio description is not hidden away on a pair of headphones, but is simply another layer of information offered as an integral component of the play.

Here, physicality and race are fully part of the drama; this is not a colour-blind production nor is it body neutral. Difference and prejudice are part of the plot, and the production triggers a variety of perceived experiences depending on each audience member’s complement of senses. Crucially though, none is definitive; there is no ‘true’ version of the play.

I have never experienced an approach quite like this before in the theatre, and on this occasion it’s what makes Blood Wedding worth seeing. But alas, while Jenny Sealey’s production clearly has ambitions to play with big ideas – honour, infidelity and vengeance are at the heart of the story, while questions of language and meaning are also made part of its architecture – this is a curiously bloodless Blood Wedding.

While we should celebrate the fact that Graeae are now able to include the Everyman on their itinerary, it’s a shame that on this occasion, the festivities seem to lack a little fizz.