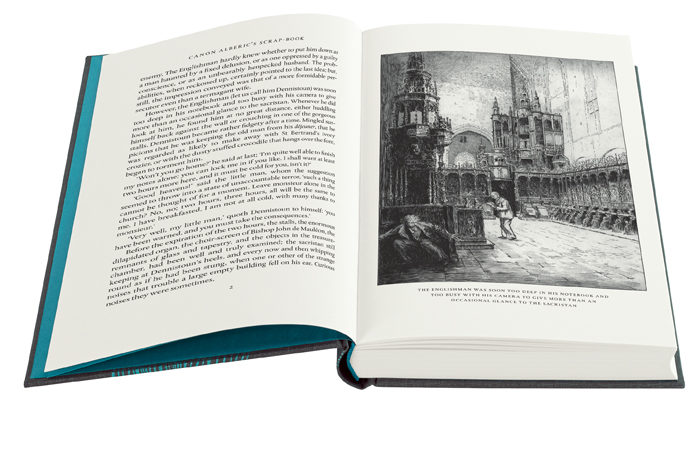 It’s stating the obvious, when reading something written over a century ago, to say that it sounds a bit outdated for the modern day. Of course, it does…except that some great works of literature transcend the date and time in which they were created, and become timeless classics.

Scarily for a book that has been given the no-expense-spared makeover treatment of The Folio Society – which publishes carefully crafted physical editions of timeless world literature – the Ghost Stories of M.R. James, just re-released in a beautiful, cloth-bound edition in a blue metallic slipcase, is not one of those works.

The post-post-post-Modern Reader is more likely to cringe under the bedcovers, not in fear and horror at these supernatural fireside tales, but with embarrassment at how dated and – let’s say it – un-scary these stories are, written by a long-departed Cambridge prof in a long-gone age.

It sounds terribly unfair but Ghost Stories, which follows an edition of The Collected Ghost Stories of M.R. James published in 1932 (the original stories date back to the turn of the century), has not aged well.

Tempting as it therefore is to caricature the not-so-gripping yarns as the outdated bumblings of a long-dead nob and snob, it’s probably best to acknowledge that he’s now seen as the father of the English ghost story, no less, and try and enjoy them. 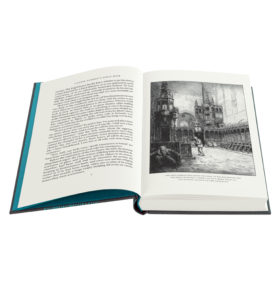 It helps, certainly, to read them in the exquisite format in which The Folio Society has presented them. Treat this book, if you find it masquerading as a box of chocolates within the gift-paper beneath your Christmas Tree, with affectionate curiosity and not as a satisfyingly spooky festive read. Don’t drag the kids away from Star Wars Battlefront II Xbox One Edition to listen to you reading the book to them by the fire. If you do, the best you can hope for is some pseudo-anthropological banter after one of them inevitably says ‘it’s boring this book and not scary, but did humans actually talk like that back then cos I can’t understand a word?’.

Like what, you ask? That question brings into question the authorial voice of Cambridge medieval scholar M.R. James (Montague Rhodes, if you’re wondering, 1862-1936). It appears that humans in England, specifically the Eton/Cambridge elite of the early 20th Century, did speak like that – i.e., like this:

“I suppose you will be getting away pretty soon, now Full term is over, Professor,” said a person not in the story to the Professor of Ontography, soon after they had sat down next to each other at a feast in the hospitable hall of St James’s College. 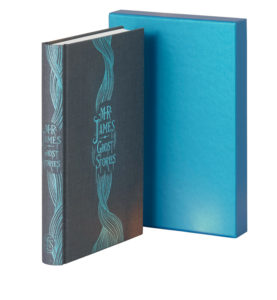 This is hardly a classic intro to one of his most celebrated ghost stories, Oh, Whistle, and I’ll Come to You, My Lad, and it’s what you’re up against here: a Cambridge man trying to give his fellow Cambridge men the giggling willies, as it were.

James’s intended/original audience was not the hoi polloi like this reviewer (ref the scarily unrefined inhabitants of Grim-Up-North late 2017) but an early 20th Century southern coterie of his pals to whom he read his tales in his College rooms on Christmas Eves by the light of a single candle. One of that clique was another James, an illustrator called James McBryde, whom the author later commissioned to illustrate the stories. Arguably the spookiest tale of all is the true story that McBryde died suddenly in 1904 having completed only four of his pen and ink drawings for the ghost stories (cue Twilight Zone music).

So what are these 15 stories all about? That would be like telling you what your Christmas present is, but recurring themes feature fixated antiquarians roaming around deserted country houses, cathedrals and monasteries looking for undiscovered texts and treasures, accidentally disturbing and awakening an assortment of fiends and phantasms as they go.

For all his flaws, what M.R. James does brilliantly in these stories is not necessarily suspend our disbelief but gnaw away at it with the detail and authority of an absolute fanatic and expert in antiquarian matters. He works hard to convince the reader, in a ‘trust me I’m a distinguished professor’ way, that this preposterously supernatural (silly) thing actually happened, by presenting his evidence almost in terms of a formal document, rendered more real with dialogue.

Stiff upper-crust formality runs through the narrative style and bleeds outwards (to the credit of The Folio Society) in the sense that an unyielding, old-fashioned, top-quality hardback is probably the most compatible format for such literature.

Apparently it takes two years to get Folio Books ready for publication. Mandy Kirkby, editor at The Folio Society, says: “Reading is the simplest of acts but among the most powerful, and at Folio each of the tiny elements which make up that experience are considered, from the smell of the paper to the choice of font to the texture of the binding material. Put simply, the physical book allows for the most immersive of reading experiences.” 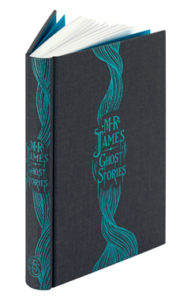 She chooses In Patagonia by travel writer Bruce Chatwin as one of her all-time favourite Folio Society books.

“Our edition includes Chatwin’s own beautiful, moody photographs of that strange country and has a brilliant binding, all ribbed and shiny, a nod to the corrugated iron houses found in South America.”

M.R. James’s Ghost Stories, in its own brilliant binding, is an immersive experience, but once you’ve had a good feel of the cover, smell of the paper and gawp at the illustrations, you may be left feeling awkwardly amused at the puerility of the text, having forked out £30 to read about this bunch of fantastical forked-tailers.

James’s stated aim was to make his readers “pleasantly uncomfortable” by reading his stories, and for one reason and another – possibly not the reasons the author intended – he succeeded with this particular reader. But even if you don’t get through them all, you are granted the festive indulgence, just this once, of judging a book by its ‘frightfully spiffing’ cover.

Ghost Stories is published by The Folio Society and available to buy now.