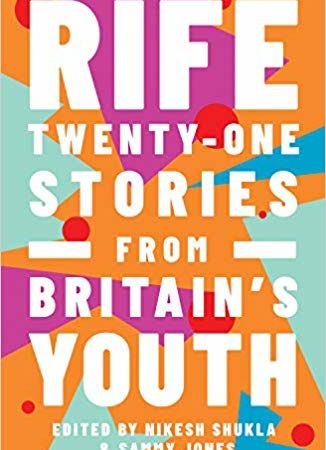 It’s no exaggeration to say that young people in the UK are facing uncertain and daunting times. While we’re all deeply concerned for our future in today’s political environment – not to mention the terrifying reality of a global climate crisis – it’s our younger generation who will inherit a future in which they have little say.

Mental health issues are widespread, university fees are on the rise, job opportunities are few and far between and home ownership is about as likely as me enjoying an episode of Match of the Day. And while these issues are problematic for my generation (I’m over 30 and while the property market often feels like a brutal game of Snakes and Ladders, I was lucky enough to be one of the last intake to experience £3,000 tuition fees), at least we have the option to voice our opinion, exercise our vote and (mostly) be taken seriously.

Enter the creative minds behind Rife magazine, a platform for the youth of Bristol, who have created an anthology of “20 passionate voices all under the age of 24 and writing across a spectrum of topics that matter to them” including sex, gender, mental health, education, crime and the future. Now, I’m sure there will be those who dismiss this text as ‘leftist’ or ‘virtue-signalling’ (good grief, people need to stop spouting guff like this) but they need to pipe down. Like any anthology, it is a glimpse into a small part of a demographic, but it’s an important exploration.

The strength of this collection is in each contributor’s ability and willingness to share their most personal stories. It’s honest and raw but it’s also hopeful and full of unity and ideas for how to move forward when things seem desperate.

I have read a few reviews online where people have criticised the quality of the writing and, while the essays aren’t the most polished or well edited, they’re still thought-out and interesting. It’s also necessary to keep in mind that the age range of the authors is 16-24. I’m not sure I would have had the ability or the confidence to produce a piece of work for such a revealing text at a young age.

As with most anthologies, some essays stand out more than others (The Modern Fairy Tale of Mental Health and ‘Just Asking for Help’ by Aisla Fineron and My Body, My Choice by Mariam Khan) and there are a few that could stand to be removed from the already quite heavy text. But it certainly isn’t a bad read and (despite this text making me feel old) I identified and sympathised with some of the subject matter, particularly those about sex, gender and mental health. 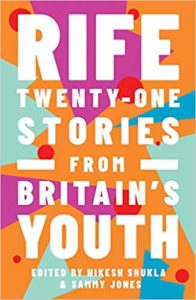 While comments have been made that this book highlights how unprepared the youth of today are when entering the world of work and independent living, I don’t think that’s true at all and it’s certainly not my takeaway. These young writers are articulate and engaged, but the world in which they are required to navigate is rapidly changing, fraught and uncertain.

Or perhaps the younger generation is simply better equipped to talk about their experiences and fears because these issues are beginning to be unpicked?

Under-24s are largely absent from mainstream media (including opinion columns, news reports and comment pieces) and are too often dismissed as sensitive ‘snowflakes’, disengaged or, as we’ve recently seen with the reactions to 16-year-old Greta Thunberg’s climate activism, ridiculed for their opinion and involvement.

It’s anthologies like Rife that are finally offering a chance for the younger generation to use their voice – and I’m excited to see more of this work.

Rife – Twenty-One Stories from Britain’s Youth is published by Unbound and available to buy now.