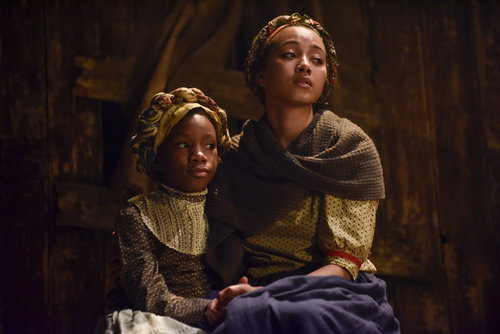 Using the songs of legendary songwriter Joe Hill – who inspired the likes of Woody Guthrie, Bob Dylan, Bruce Springsteen, Billy Bragg and Joan Baez – Bread & Roses is a new musical from Ian Kershaw that tells the lesser-known story, at least in the UK, of the mill workers’ strike in Lawrence, Massachusetts, in 1912.

Lawrence, much like Oldham where Bread & Roses is running at the Coliseum Theatre, was once awash with cotton mills. A new law came into force in January 1912 which reduced working hours for women and children by two hours, but when that cut was also seen in the workers’ pay packets they found themselves short of the funds required to feed their families.

A mix of gospel and Americana arranged by musical director Howard Gray moves the story along with a sometimes uplifting and sometimes heart-achingly beautiful effect. These were the songs of the time, sung by the strikers on the picket lines to inspire hope and unity among their masses. 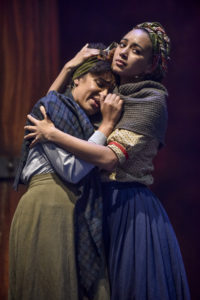 The heroine Lucy-Rose Atkins (played by Emma Naomi) is a single mother who goes on a journey from unskilled worker to impassioned leader, in a strike where women fought their way from the back of the picket lines to the front.

“As we come marching, marching, we battle too for men,

For they are women’s children, and we mother them again.

Our lives shall not be sweated from birth until life closes;

Hearts starve as well as bodies; give us bread, but give us roses”

Parallels are easily drawn to current events, both in the UK and the US, bringing this story from the early 1900s, directed by Hull Truck Artistic Associate, Amanda Huxtable, right up to date. Bread & Roses made its world premiere on Friday June 22 and has already garnered a rapturous response from audiences. 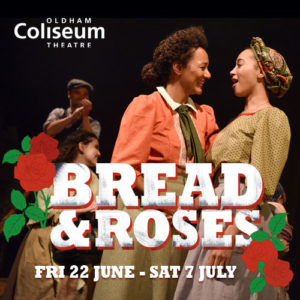 Bread & Roses is at Oldham Coliseum until Saturday July 7, 2018. For more information, or to book tickets, click here.