At this time of year, it’s traditional for families all over the country to go and see a pantomime. In York, though, they have their own particular tradition. They go and see Berwick Kaler.

Originally hailing from Sunderland in 1946, Kaler was a jobbing actor who’d already had some experience of pantomime when he was asked to be the Dame for York Theatre Royal‘s Christmas extravaganza nearly 40 years ago. He’s still there today as the country’s longest-serving pantomime dame. This year he’s starring in a show called Aladdin and the Twankeys, which, as is now customary, he has also written and co-directed.

By now Kaler has become a familiar sight around York, whatever he might be wearing. “Recently we were doing a bit of filming for the pantomime out on the streets,” he explains. “I was dressed as a Brownie or something and a few of the other people in the cast were there all dressed in pantomime outfits. Suddenly, coming towards us there was four young hoodies!  We all said together, ‘Oh God, here’s trouble!’ And do you know, they were straight out with ‘Can we have a photograph taken?’ and ‘Ah, I’ve been seeing you since I was this high…’”

Kaler’s pantomimes are largely traditional affairs, with the emphasis on fun, family entertainment and solid production values rather than whizz-bang effects or star turns. It’s not overstating it to say that, over the years, they’ve become a cornerstone of York Theatre Royal’s annual output.

“Every boss of the theatre that’s ever came in here, it’s got to the stage where they can’t sack me, only the board can! And when they go for interviews for these jobs, one of the things they ask is, ‘Do you like pantomime?’ And if they said ‘no’, they might as well just walk out the door. Now that’s not to say that pantomime is everything in this theatre. It’s a bloody good repertory theatre that does fabulous things, and this year especially we need everybody to come through those doors because of the Arts Council cuts and all the rest of it. We have an audience, yes, but if they suddenly decide to just say, ‘Ah, we’ll give it a skip’, we are in serious trouble.”

As usual, this year’s show Aladdin and the Twankeys has been co-directed by Kaler and York Theatre Royal’s artistic director Damian Cruden. Can he actually take direction, though, after all this time? “No, I can’t! I can’t, I have to confess. The thing with Damian is, he’s the artistic director, and here’s this bald-headed old fart pensioner who comes in and I treat him like my psychiatrist. What happens is that I do the first bit of the rehearsals and then when it gets technical Damian takes over and I become the Dame. That’s how we work it.” 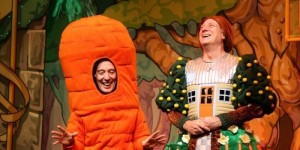 Steeped in pantomime as he is, Kaler has got some strong opinions on how such things should – or shouldn’t – be done. Perhaps surprisingly, he doesn’t wear any of the outlandish make-up that so many Dames go in for. “I can’t bear it. I just think, your face has got to fit. That’s like clowns’ make-up. It’s scary. I mean, we’re not saying pantomime is reality, but I haven’t seen a woman yet who wears make-up like that. I just wear the boobs and stick the wig on and that’s it. And they laugh.”

It has to be said that, in some circles, the term ‘pantomime’ is  not used a compliment, but rather as a by-word for tawdry, unsubtle family entertainment. It’s not a form which enjoys the highest critical reputation.

“Oh, it’s completely derogatory, it’s down. I mean, when Sir Ian McKellen appeared as the Dame at the Old Vic we sort of rose up the ladder a step, but…no. What I hate is, the reputation for pantomime isn’t because of the silliness and the slapstick and everything. It’s because it is so bad in some places.”

Kaler himself is unfailingly passionate about his chosen field. “I mean, I’m not, well, no I am going to say it: pantomime is an art form. And we have a team here, they’re kids some of them, but they’re all good exponents of the art of pantomime. There’s a lot of originality that goes into the show and a great deal of effort. The hard work involved is tremendous. We’re not a lazy pantomime, but the rewards are there. The faces of the audience when they come out is a pleasure to behold. In this digital age and all, we’ve got audiences belly-laughing at pantomime, can you believe.”

Many big pantomimes bring in familiar names from the world of TV. Kaler is disparaging about the end results. “Look, you can be a plumber, you can be whatever – if you do pantomime then you’re welcome into our show. But if you’re a star name, it is not enough for that person to stand on the stage, breathe through a microphone and not work up a sweat or anything. And we’ve had that here. They’ve had big names. They come on, they do about ten minutes. It just stinks of them doing it for the money. And everybody else below them, they’re on nothing.” 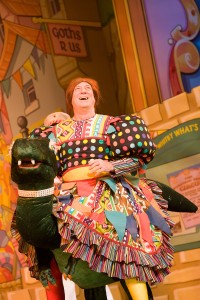 He’ll admit to being a stern taskmaster if it’s for the good of the show. “This company is a family and if the audience don’t like you, or you don’t fit in with the family, you’re not back next year. It’s as simple as that. I guarantee that you’ll never see anybody walking through a performance ever, ever. And they never know what they’re going to get from me, bless ’em. If I think the show’s getting a bit boring from one or two angles, I’ll change the lines to keep it fresh.”

In early February, on the final night of each run, Kaler announces the title of next year’s show from the stage. By his own admission, this is often a completely spontaneous decision. “Nobody knows what my mouth is going come out with on that last night, including me. For a few days beforehand I might say to Damian what I’m planning to announce, but then change my mind on the spur of the moment, right in front of the audience.”

He takes a break after the end of the two-month run. “The ‘P’ word, pantomime, is banned in my house for about four weeks” –  but by April he’s starting preliminary work on the next script. So each show is virtually a year-long undertaking.

By this point in time, Kaler’s pantomimes are being attended by the children or even – whisper it – the grandchildren of his earliest audiences. He’s not planning to hang up his ginger wig just yet, but he’s conscious that his record-breaking run can’t last forever.

“I do have a good idea what show I’m doing next year, if I survive. I did say say I wanted to be the first actor in the whole world in the history of show-business to retire at 65, but here I am at 67 so I’ve broken that one. But I will not go for sympathy, I don’t want to come on with a Zimmer frame and have people just supporting me for the things we’ve done in the past, and them saying, ‘Ooh, he’s not as good as he was’. But it’s just a joy, it’s an absolute joy to go out there. And ironically, my face is just growing in to being a dame.”

What: Aladdin and the Twankeys