Jo Dearden November 13, 2013 Arts, Enterprise, Heritage Comments Off on By The People, For The People: The Whitaker 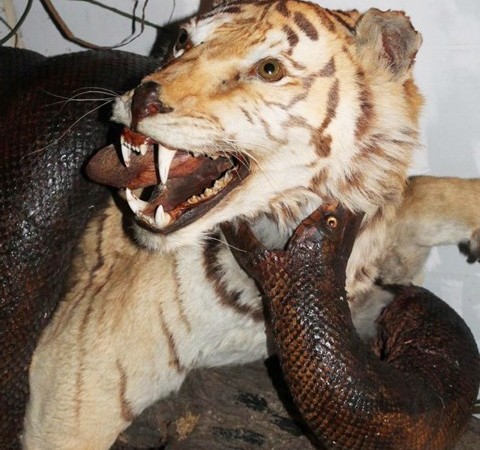 Where can you see a tiger and python locked in a terrifying embrace, a baby African elephant and a genuine shrunken head? At The Whitaker Museum and Art Gallery in Rawtenstall in the heart of the Rossendale Valley.

However, earlier this year it looked as if these curios, along with all the other exhibits, would disappear from public view. Austere times led Rossendale Borough Council to declare that the attraction did not represent “value for money” and, if a valid expression of interest could not be found, it would be closed and boarded up indefinitely.

Step forward three local residents: Jackie Taylor, Julian Williams and Carl Bell. They’d worked together for many years in social work and the NHS but partners Jackie and Julian also had a keen interest in art – running the See Gallery in Crawshawbooth in their spare time. They read about the threat to the museum one Wednesday back in February. The deadline for submitting expressions of interests was Friday so they only had two days to put a bid together. By Tuesday they were in talks with the council.

In less than a week the three friends had acquired a museum and art gallery. Now all they had to do was decide what to put in it and figure out how they were going to run it.

Northern Soul: Jackie – you, Carl and Julian now run The Whitaker. What have you achieved so far?
Jackie Taylor: We said to Rossendale Borough Council that in our first six months we’d: put in a cafe, which we’ve done; refurbish the gallery space and put on regular exhibitions, which we’ve done; and double the amount of visitors per day, which we’ve actually exceeded.

NS: You’ve changed the name – from Whitaker Park Museum and Art Gallery to The Whitaker. Has the ethos of the place also changed?
JT: When we first came here it was like walking into a box of everything. We needed to understand the house and give it a clearer narrative. We also needed to rebalance the museum side of things with the art gallery side. Before it was too much museum and we’re trying to integrate the two, not just by having art in the exhibition room but by making the whole space feel like quite an arty place to be. 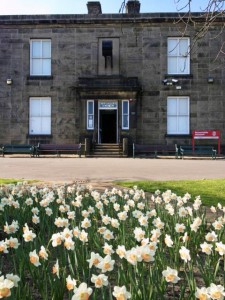 NS: Why were you personally interested in getting involved?
JT: I used to come here as a child. I remember sitting on top of Nellie [the stuffed baby elephant], as all the kids did back then. We pulled out all its hairs and the tail eventually came off! We want people, especially children, to have that hands-on experience. When we first came here it was very much a ‘don’t touch’ museum. There were notices and ropes everywhere. Although you can’t sit on Nellie anymore we’re making sure there are plenty of things you can do.

NS: Can you tell us a bit about the history of the house?
JT: The property and grounds were originally the family home of a Victorian mill-owner, George Hardman. There was a fortune in the valley in those days and he had it built on the hillside so he could look down over his mill. We have a room that’s dressed as a Victorian drawing room, and I like that sense of going back in time. George Hardman had seven children so this would have been a very lively house back then. The last person to live here was George Hardman’s grandson and he decided to sell up.

It was bought by Richard Whitaker, but he never lived here. When he was a young lad Richard worked as a doffer (someone who replaced full bobbins of thread with empty ones) in Hardman’s Mill but he went on to become something of an entrepreneur. His intention was to open up the house and the grounds to the ordinary working folk of the valley. He landscaped the gardens and turned them into a park, and converted the house into a museum. He wanted the children of the valley to breathe fresh air and learn something about the world around them.

So Mr Whitaker is massively important to us. We want people to know what a kind, generous, forward-thinking man he was.

NS: What’s your favourite exhibit?
JT: One of the things we say is that The Whitaker is unique to everyone, so that when you come in you’ll be drawn to something and you won’t be sure why. I really like the crayfish. He’s on the front of our current brochure and I want to get him animated and do some more things with him. But I also like a small, delicate, triangular ceramic pot. That’s what I keep getting drawn back to.

NS: What has been the most satisfying thing about the experience so far?
JT: I really liked the Reveal exhibition I put on, which showcased the work of various local artists.

NS: What events have you got coming up?
JT: At the moment, we’ve got an exhibition by Preston Threads which uses a wide range of textile techniques. I’m also really looking forward to Kids Take Over on November 23 when we’ll have children aged 4-16 meeting and greeting, telling visitors about the history of the house, talking them through the exhibits and running craft workshops. 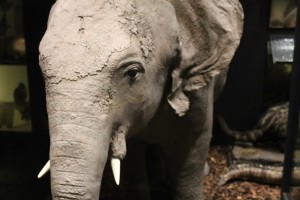 Then, in December, we’ll be feeling festive with a range of activities and events. There’ll be an artist-led craft workshop from 11am-4pm every Saturday and Sunday before Christmas where all the family can make traditional decorations, cards and gifts. Santa will be in the drawing room from 2pm-4pm on the 14th and 15th (ring ahead to book and to tell Santa what your little ones have been up to). And on the afternoon of the 22nd we’ll be full of Christmas cheer as the Rossendale Community Choir sing carols while we serve mulled wine and roast chestnuts.

NS: What kind of person will The Whitaker appeal to?
JT: Anyone from 9 months to 90. We’ve just added sound in the animal room and tiny babies really seem to like it. We’re very conscious of making sure that each space has something for children in it. We want to encourage the whole family to linger, which is why we also serve alcohol and nice cakes in the cafe.

But we also say “Don’t forget your Grandma,” because Grandma probably has quite a lot of knowledge about the stuff that’s here. Nostalgia’s important and can be therapeutic too. We’re just about to do a singing workshop for people with dementia and I think we’re a nice venue for something that.

NS: What are your future plans?
JT: The natural history side is going to be quite important, we’ve got the head of the Manchester Museum acting as our mentor. But we just don’t have enough space to show everything from the collection that we want to. That’s why we’d like to convert the stables and coaching house, so we can continue the story. We’ve applied for a grant from Heritage Lottery to help with that and are waiting to hear back.

We’ve also just got a license which means we can now put on music. Hopefully we’ll have some outdoor performances: jazz, a band, a play. Eventually we want to have something special going on here every weekend, either indoors or out.

NS: Do you think you’ll be able to keep The Whitaker open for the foreseeable?
JT: If we continue to build on the success we’ve had so far, then yes. I think it will take another year for it to become the really vibrant, busy, buzzy place we want it to be. But we can’t do it on our own! We’ve just launched our volunteer’s programme called ‘It’s A Win, Win’. That’s a really big thing for me. If anyone’s interested in getting involved please email us at info@thewhitaker.org. 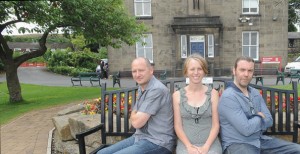 What: The Whitaker Museum and Art Gallery

Getting there: the X43 bus runs direct from Manchester Chorlton St/Deansgate to Rawtenstall. The East Lancs heritage railway also runs from Bury to Rawtenstall at weekends and various holidays.