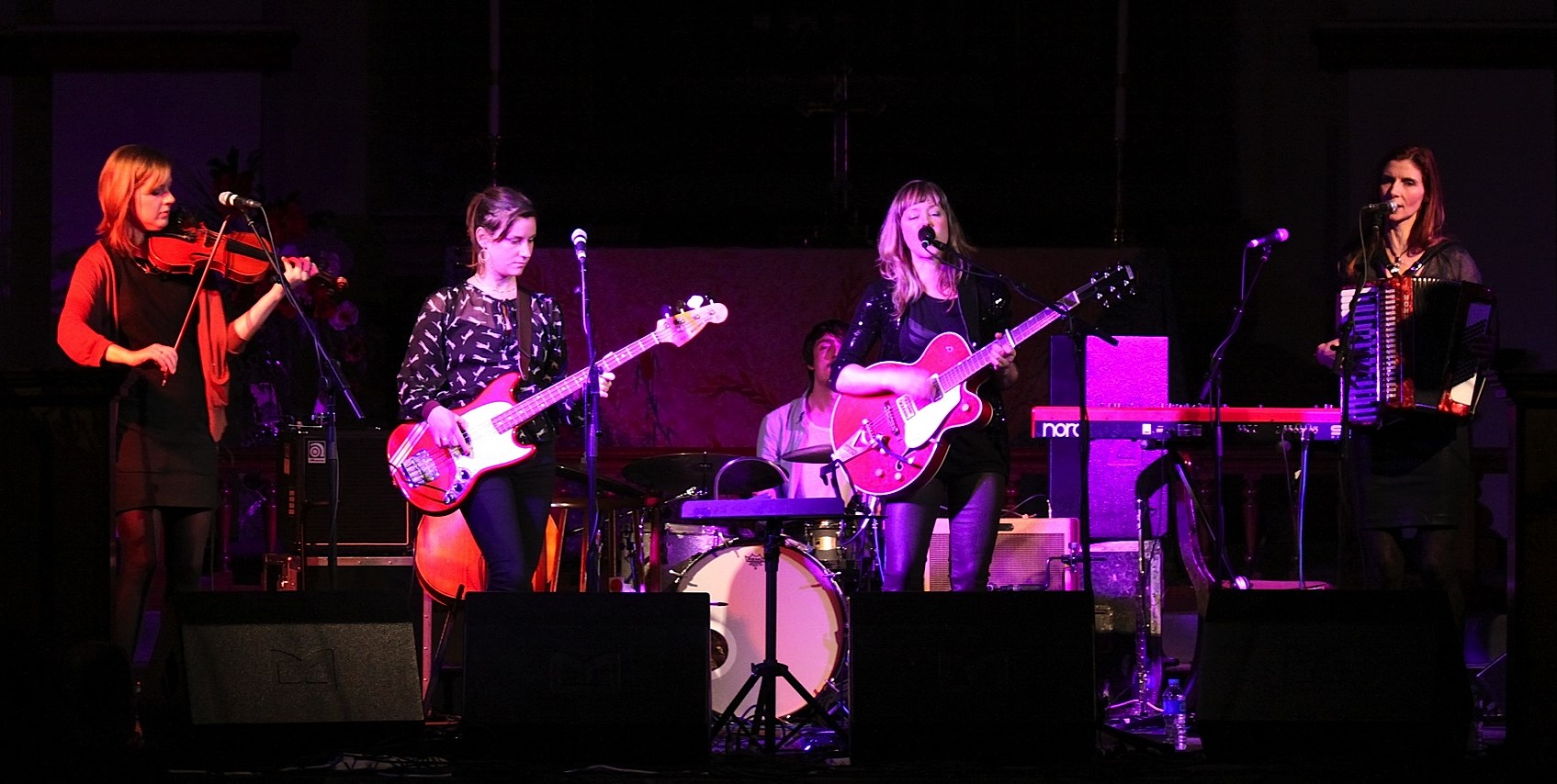 To write about Emily Barker and & The Red Clay Halo is to dispense with the measured use of superlatives. The band, comprising Emily Barker (guitars, lead vocals), Gill Sandell (keyboards, flute, accordion), Jo Silverston (cello, bass), Anna Jenkins (violin, percussion) and Nat Butler (drums), satisfy on so many levels that their increasing legion of fans can only wonder how a band so accomplished – so all round damn good – haven’t yet reached the dizzy heights of mainstream success. Surely it’s a matter of time before their unique brand of melodic folk falls on a great many more ears?

And to write about Barker and crew is to draw your attention to a number of prestigious accolades. Ivor Novello for Best TV Soundtrack? That’ll be for the haunting Pause, theme to BBC Two’s The Shadow Line. BAFTA for Original Television Music? That was for the stunning Nostalgia, theme to the BBC hit series Wallander. Perform at the 2012 Olympics Opening Ceremony? Step forward Barker and the band, singing alongside the inimitable Frank Turner (who also sang with Barker that year on the brilliant Fields of June). Have a listen to any of their albums – their critically-acclaimed latest Dear River, for example – and you’ll understand why it would be manifestly inappropriate for any of these likeable, down-to-earth girls (and Nat) to hide their collective lights under bushels.

Tonight sees Emily Barker & The Red Clay Halo kick off the second leg of their Dear River tour in the beautiful surroundings of St. Philip’s Church in Salford, the perfect setting for an uplifting dose of melody on a cold November night. Supporting were Rachel Hillary and Chris T-T, who between them did a sterling job of warming-up the coat-retaining faithful. Hillary’s beguiling vocals and folk melodies, constructed around simple, lingering chords strummed on acoustic guitar, provided a delightful intro to the night’s proceedings. A last minute addition to the evening’s line-up, she is surely one to watch.

Amiable, Brighton-based singer-songwriter Chris T-T, promoting current album The Bear, sets quirky, sentimental tales to touching melodies, including The Hedgehog Song, the story of a dying hedgehog with his leg trapped in a Coke can who is guided back to life by a hedgehog angel. Alternating between guitar and keyboard, and proving himself adept at between-song banter, T-T left the audience in no doubt as to the quality of his musicianship and singing, and had the welcome addition of Barker’s vocals on the tender Gulls toward the end of his thoroughly enjoyable set. “We have a Salford where I live,” said Chris on the subject of the Manchester/Salford divide. “It’s called Hove.” 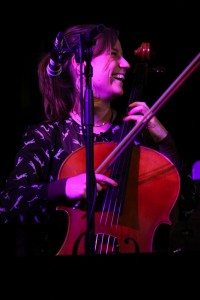 The evening’s foundations thus ably laid, it was time for Emily Barker & The Red Clay Halo to take centre stage. Opening with the title track of their new album, the upbeat, country rocker Dear River, the song is a reminder of how Barker has successfully channelled Nashville influences in the band’s new material without compromising their signature melodic strength. Ropes, a tale of love gone sour, was next – and a welcome reminder of 2011’s beautiful Almanac album – before the band embarked on a four track-outing of the new album, including the dramatic Tuesday and the wistful Letters, a loving re-creation of Barker’s Dutch grandfather’s Second World War experiences. It’s a gorgeous melody, beautifully sung by Barker and the band who, quite apart from their musical ability, have a deeply appealing vocal sound.

Of course, the evening wouldn’t have been complete without the inclusion of Nostalgia, which was perfectly delivered and enthusiastically received by the Salford crowd. The Red Clay Halo then trooped off temporarily, leaving Barker in the spotlight to perform a trio of songs on acoustic guitar. First up was The Ink Spots’ 1940 coffee-tribute The Java Jive (fans of Barker will be familiar with her admiration for the black stuff), then the superb Little Deaths, followed by Home, an early composition prised from the band’s first album (2007’s Photos. Fires. Fables.), written by Barker during an extended period of backpacking far from her home of Bridgetown in Western Australia.

It’s the theme of home that Barker gives a thorough mulling over in the new album. Having lived in England for a number of years now, she clearly has great affection for it; but there is a clear surfacing of Aussie-longing throughout Dear River, like the remembrances of a lover vying for her attention. What is home? How much do people and landscapes contribute to our sense of it? These seem to be key questions for the thoughtful Australian.

When the rest of the band return, they’re off with new single Ghost Narrative, followed by a storming rendition of Everywhen, a poignant evocation of colonial land-grabbing in Australia and the plight of the indigenous population: “Cracked feet of ancestors dancing to the broken record repeating that this land is empty…“. It’s another subject close to Barker’s heart. Disappear, that foot-stomping, barnstormer from 2008’s Despite the Snow, brings Jenkins and Silverston’s exuberant strings and Sandell’s pumping accordion to the fore. With Butler’s nifty drumming holding things together and Barker’s vigorous guitar work, it’s a song that reverberates with the power of skilled musicianship. The Blackwood follows, a lilting ode to a loved Australian landscape, and the whole band leave the stage briefly before returning for the encore, which begins with the sublime In the Winter I Returned, another song that explores the question of home and a sort of ode to the English landscape.

Despite growing success, it’s worth stating that this is a band who defy artistic aloofness on a daily basis. Barker regularly updates and engages with fans on social media, and by way of the phenomenon that is Facebook, recently invited any fan game enough – male or female, young or old –  to join her on stage for the purpose of performing Frank Turner’s vocal on the fabulous Fields of June. For your reviewer, who has been charting the band’s progress for a couple of years now (and whom you’ve no doubt sussed is a bit of a fan), the opportunity to sing with Emily Barker & The Red Clay Halo was one I could hardly ignore. I can only confirm that, after putting my name forward, I was chosen to sing, I sang, I didn’t mess it up, and I absolutely loved it. Barker and the band were thoroughly accommodating of the stranger in their midst – as were the fantastic Salford crowd – giving this humdinger of a song everything they had, smiling, having a ball and charging St. Philip’s with rampant folk energy. Needless to say, your reviewer found it hard to leave the stage. 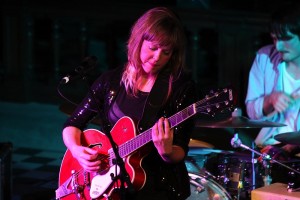 Honours for the closing song of the night went to the Moman/Penn classic Do Right Woman, Do Right Man, recorded by Aretha Franklin and later by influential country rockers The Flying Burrito Brothers. Delivered with reverential finesse, it was the perfect tune to round off an evening of high quality musical entertainment. Butler and the girls left the stage to huge cheers, resurfacing a short while later to meet fans and sign autographs.

This was a superb performance by a band of exceptional musical ability, led by a singer blessed with an angelic voice and an unwavering command of classic songwriting. Barker and crew must – and should – be confident of achieving further success. For tonight, though, in the beautiful surroundings of St. Philips Church, both band and audience must have felt that it doesn’t get much better than this. 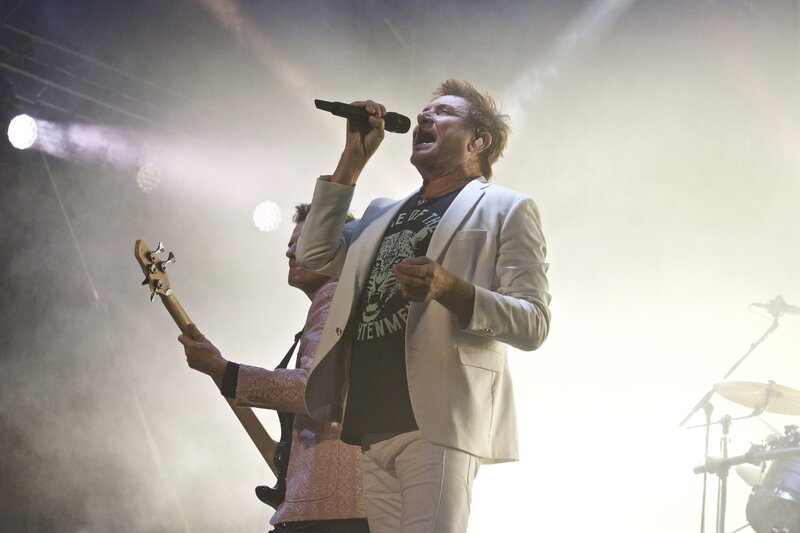 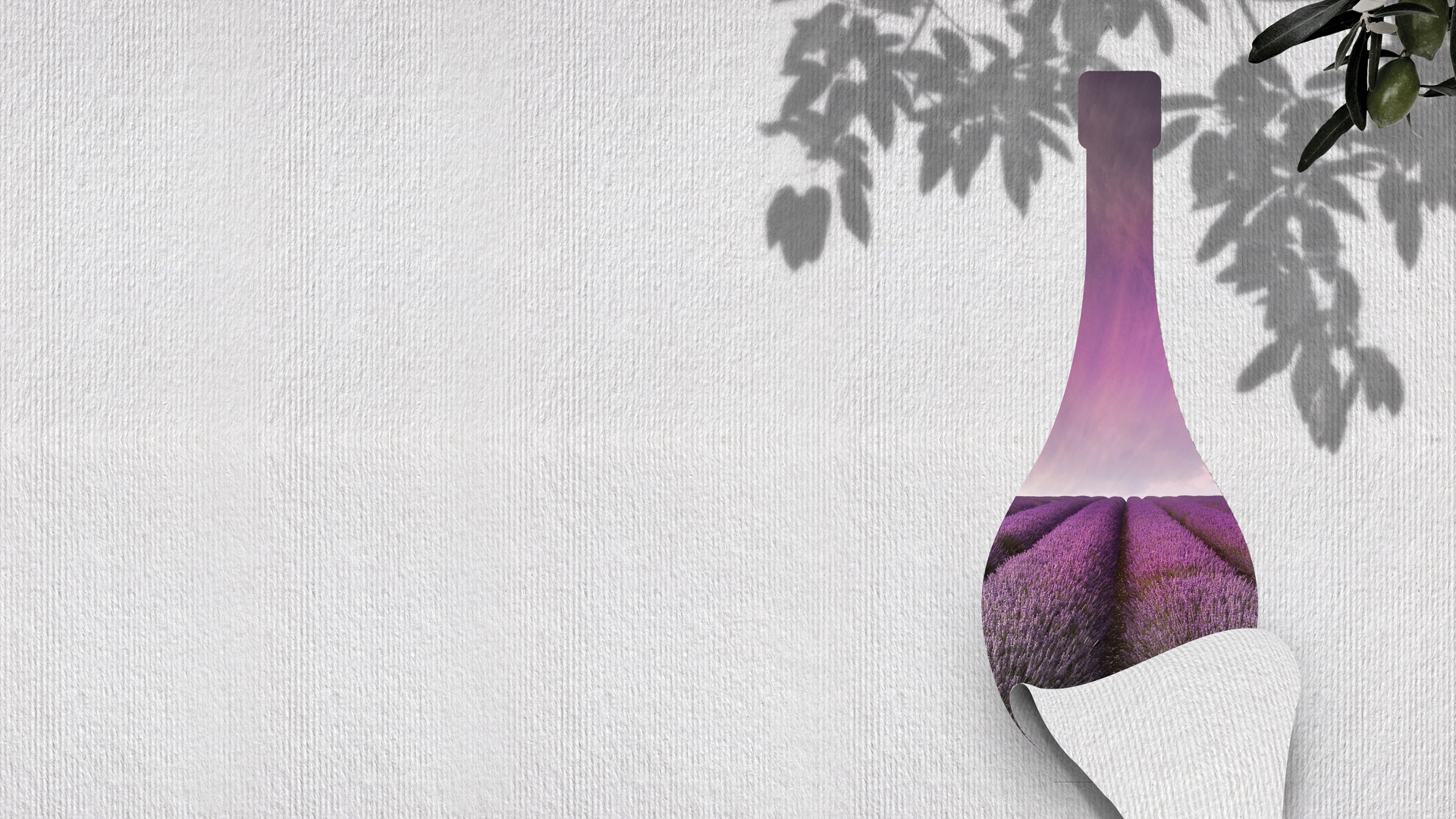 Swooning on a Sunday Afternoon 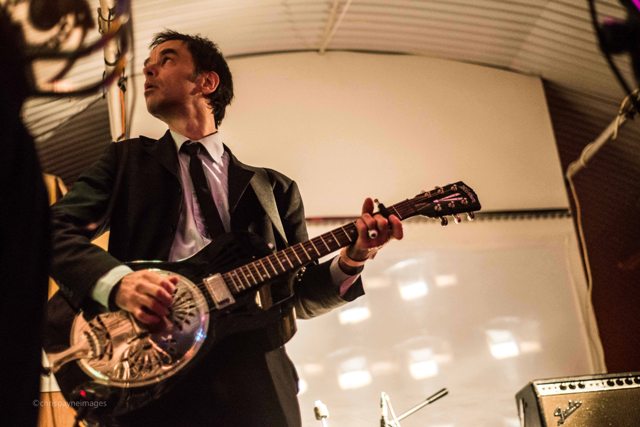 Sounds From The Other City 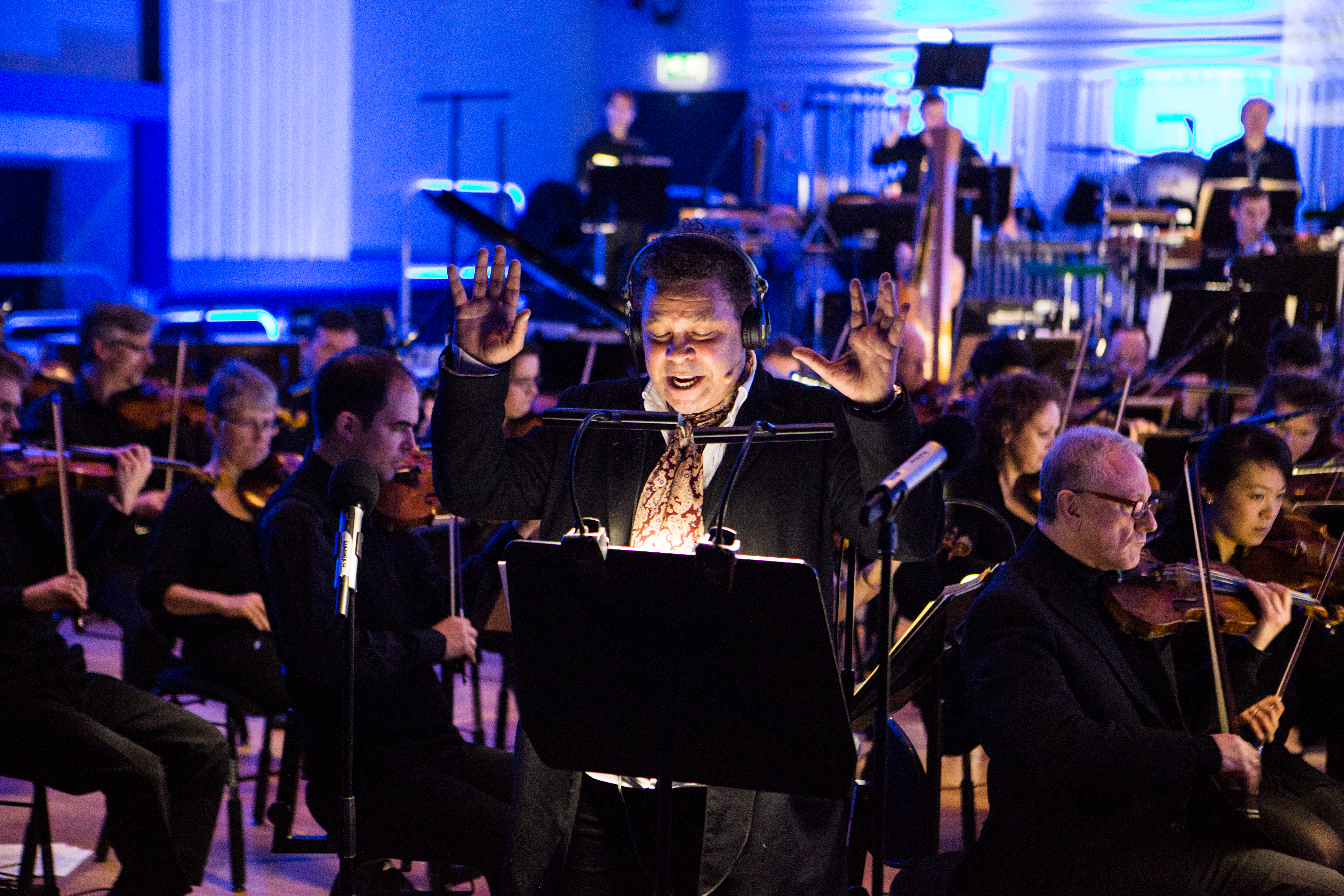