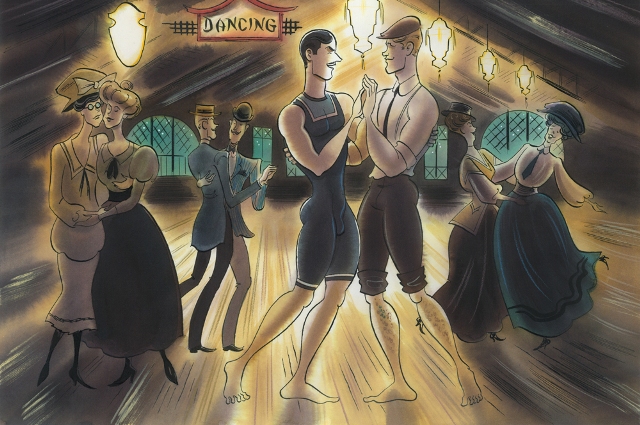 Bren O’Callaghan is visual art programme manager for Cornerhouse & HOME in Manchester. He’s also an independent producer, curator and artist-maker. His projects are known for a playful sense of wonder and innovation, intended to delight but also encourage dialogue and debate.

Ripe for celebration, Vellekoop is a leading figure within an under-the-counter pantheon of artist-illustrators who trace their lineage to the golden age of powder-tinted girlie artists, from Alberto Vargas, Zoë Mozert and Gil Elvgren to the leather-clad muscles of later male fantasy art, encompassing Tom of Finland, Harry Bush and Frank Frazetta.

On first examining his work I was captivated and intrigued, but also a little discomfited by its frank depiction of gay, bi and hetero sexual activity; rampant with ruler-rigid boners, luxuriant pubic fuzz, winking buttholes, nipples so pert you could sling a wet towel from them, as well as much hamster-cheeked knob-gobbling, carpet munching, squeezing and kneading of pen-and-inked flesh.

That I should experience even the slightest self-consciousness while viewing alone was a warning klaxon, one that encouraged me to question these feelings in more depth.

After all, it’s not even filmed or photographic adult pornography, which I have no problem enjoying now and then. Perhaps it was something about the medium itself, incorporating pen, brush, ink and watercolour, or the range of milieu in which his characters are located: not simply adult environments of bar or nightclub, but office, forest, dream, underwater and outer space, all elements that when combined are suggestive of an unrestricted, illogical pool of limitless awe and possibility – one more in keeping with childhood expression than adult experience, a reflection of anything goes versus abide by the rules.

Here lay the crux, one that ultimately led me to persuade myself that if I should feel my eyes darting to the edge of the page for fear of what it meant, if I should stare, and grin and join the artist in his ‘silly, symphonic celebration of sexual freedom’ (in the words of Dr Cornelius, companion to Vellekoop’s  deliciously libidinous recurring female character, Gloria Badcock), then I should tackle this hesitation head-on by proposing and curating an exhibition of his work.

This exhibition, one that I hope many will attend and experience regardless of gender or genital experience, is in fact aimed in the first instance at an audience of one. Me, aged 15. Me, at a time when I most needed to be reassured that my burgeoning sexuality as a gay man was nothing to be ashamed of, that sex and physicality had just as important and valid a part to play in my emotional maturity as any amount of book-guzzling, art house movies or candlelit Kate Bush cassette renditions. 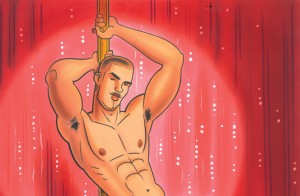 To reject our bodies, feelings, fantasies, icky-thoughts and natural desires is to reject ourselves and our human nature, placing us at risk of massive personal damage as we attempt to live up to distorted standards and harmful ideals.

Maurice Vellekoop’s Pin-Ups is his most successful book of explicit male ‘beefcake’ illustrations, the gay male equivalent of cheesecake beauties, inspired by vintage girlie art and featuring calendar boys, musical idols, sporting legends and figures from fantasy, history and literature. Likewise, ABC Book takes the form of a traditional children’s learning aid, complete with rhyming couplets, and re-imagines it for adults from a guileless, x-rated perspective.

The World of Gloria Badcock follows the sexploits of glamorous, bisexual magazine editrix Gloria Badcock and her gay companion Dr. Cornelius as they travel back in time to the eve of the French Revolution, cavorting with courtesans and servants alike at the court of Marie Antoinettte.

A Nut at the Opera picks at the chocolate box of an imagined cornucopia of operatic excess, detailing such colourful characters as Dame Formalda Hyde and Vatda Heck, with references ranging throughout the history of opera to the heights of Wagnerian solemnity and the excesses of French spectacle. 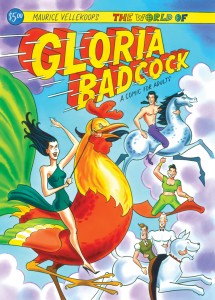 Two new affordable prints in Maurice’s Pin-Ups range have been deliberately created to respond to North of England male stereotypes; Glow Stick depicting an Acid House raver, pre-come down, and So Much To Answer For a tattoo-spattered, craft beer brewer…both in a state of heightened excess, at £35 each.

The exhibition arrives at a moment of renewed significance as Vellekoop embarks upon a graphic memoir (I’m So Glad We Had This Time Together!) commissioned by the Canada Council for the Arts. Edited by author and award-winning art director Chip Kidd, to be published by Pantheon Books, cathartic panels detailing the author-illustrator’s personal journey are also featured.

Cockadoodle is supported by a programme of events and activities that address notions of private shame, empowerment and the often-overlooked role of personal fantasy in critical cultural appreciation. This includes the Manchester debut of London literary salon with a twist, Naked Boys Reading, curated along the theme of True North – a line from the Canadian national anthem, with extracts exploring loyalty and isolation, magnetism and melancholia.

Don’t make the mistake in thinking the exhibition or events are only for LGBTQ audiences, or those who harbour a kinky streak. Vellekoop’s work is suffused with joy and a hard-fought happiness as he encourages others to dip their toes into a shame-free, consensual and fabulously fantastical universe; a Velle-vista lit by sun and stars, rather than hidden in shadow.

Cockadoodle: The Erogenous Art of Maurice Vellekoop, curated by Bren O’Callaghan, is supported by Arts Council England and Homotopia Liverpool with additional funding from Manchester Pride. 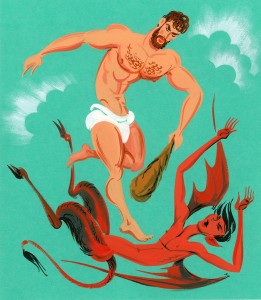