Dracula: Northern Soul gets its teeth into Mark Bruce’s production 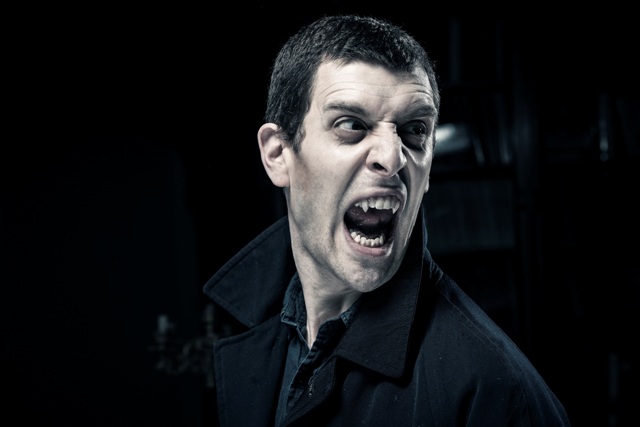 Ask anyone for the first name of the choreographer and it’s pot luck whether they say “Christopher” or “Mark”. For the latter, dance runs in his blood but his father’s legacy has never cast a shadow over his work.

“I never really thought about having that above me – who my father is – because I was so obsessed with what I was doing.” He laughs understandingly at my fan-girl moment over his childhood spent touring with the Rambert dance company and reflects that “the whole heart of that culture – that fantastic time in the 70s at Rambert – is inside me”. So surely a career in dance was inevitable? Turns out, that was not the case. “I wanted to be a comic strip artist.” Right. Not quite the answer I was expecting.

And so, as I sit in a cold and echo-y classroom with Mark Bruce on the other end of the phone, I’m struck time and again by the fact that this man is not what you expect. He’s so much more than a choreographer, which is perhaps what makes his work so special. “Because I did lots of other things before dance – movies, music, visual arts – I’ve actually got something to choreograph about.” Asked about what inspires and motivates him, Bruce concludes that he “would never ever be able to choreograph the equivalent of what Jimi Hendrix could do on a guitar. That sets a benchmark for me”.

The question on my lips was, after a career spanning over 20 years, why stage Dracula now? “I read Dracula when I was about nine or ten and have always loved re-reading it, always come back to it. I thought about doing a version of Dracula – in some form or other – even before I thought about dance.” So what made now the time to give it a go? “Part of the reason I put off making it for so long was because you need a lot of ingredients to get it right and there’s no simple answer to how you do that.”

It’s clear to see that this production has been through a rigorous editing process – you don’t get a show sharper than Dracula’s teeth overnight. Whatever ingredients Bruce was holding out for were worth the wait.

This weekend, as Manchester was lit up with Diwali celebrations, I was exposed to the artistry that lurks in the shadows as I found myself at the Contact theatre in Manchester amid a crowd of creative-types and creatures of the night (this is part of the Manchester Gothic Festival, after all). I can’t help but feel a little smug that I’ve managed to bag myself the best seat in the house at a show for which tickets are so coveted you’d kill for them. *cue inward evil laugh* 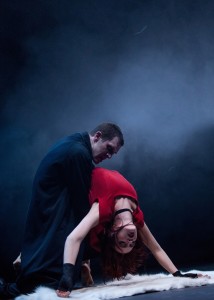 I wait with baited breath as the chap next to me spies Braham Murray’s name in the programme and whispers something along the lines of “kiss of death”. As the lights go down and chills run down my back, I wonder if they’ve actually lowered the temperature in the room.

It’s clear from the first note that this isn’t the commercialised, cult-inducing image of vampires we’ve grown used to in modern films. Instead, this is a much more traditional vision of the illustrious Count and his cronies. The lighting is used simply and strikingly, the set is dark and eery, and the music is divine. Bruce confirms this: “I have a great respect for traditional methods of theatre.” And it’s a good job he does because it’s the simplicity of the production that stops Bruce’s biggest fear – “just making it stupid” – being realised. There are times, when the parallel staging errs dangerously close to over-complicated and the temporary lapses into jovial cheese-fest come close to school play territory, but the depth with which Bruce approaches this proves its salvation. As he very readily admits, “I have a very particular dramatic aesthetic.” Does he ever worry people won’t ‘get’ it? “If I ever feel like I’m getting too weird with my work or that people won’t understand it, I go back to David Lynch and watch his work and realise it doesn’t matter.” And it doesn’t.

This production is a dream – a beautiful nightmare if ever such a thing existed. It seems fitting then to label it a work of contrasts – a true gothic tale in its exploration of light and dark, innocence and evil, love and lust. From the first step, Jonathan Goddard as Dracula shines – and no, not in an Edward Cullen stepping into the light kind of way. It’s clear to see why Bruce chose him. “In the book, Dracula doesn’t really do anything – he disappears, he’s alluded to, he’s very still. But meeting Jonathan helped me realise, he’s a predator, a wolf, a bat, a nobleman – all these different things that have different types of movement.” It’s certainly true that with his wide, bloodshot eyes and lithe figure, Bruce’s Dracula is every inch the man for the job. As actors are taught to know their motive for every line, Goddard’s performance could be paused at any moment and perfectly portray his sultry story.

What makes it so easy to be seduced by Dracula is that it encompasses so many facets of the Count’s (super)natural instincts. The fast-paced and folksy complement the surprising bursts of comic relief which in turn contrast the dark and provocative. I find myself thinking that the Vampire Brides must have had a hoot in the studio practising their screams. All together now! The stunned silence at the end of each act before any single audience member managed to retrieve themselves from their trance-like state to applaud speaks volumes. Bruce wanted the audience to be “taken on a journey, even if they can’t define its resolution”, and that’s exactly what he’s achieved.

Its biggest pitfall? Too short a tour.