“The North is an amazing place and its potential has never been fully realised.” Edna Robinson, chairman of the People’s Powerhouse

Chris Wallis February 25, 2018 Enterprise, Northern Soul writes... Comments Off on “The North is an amazing place and its potential has never been fully realised.” Edna Robinson, chairman of the People’s Powerhouse

I love Edna Robinson. Not in a romantic way, you understand, I haven’t had a Valentine’s Day epiphany. Rather, I mean in the way that love commands your respect and amazement in equal measure. Robinson is a self-confessed disruptor, someone who takes an institution and shakes it up from the inside. And she seems to be fearless.

I’m interviewing Robinson because she recently agreed to be chairman of the People’s Powerhouse, more of which anon. But when I researched her for the interview, the list of her achievements was astounding. She is chairman of Trafford Housing Trust and chairman of The Big Life Group, two organisations devoted to improving the lives of ordinary people. She founded NHS Networks, a portal for clinicians to share best practice, and has in her time been a nurse, a midwife, manager of a psychiatric hospital, senior manager at Manchester Health Authority and a policy adviser to ministers in the Blair/Brown government leading on the Prevent strategy on counter-terrorism.

We meet in the café at Limelight, a beautiful new health and community centre built by Trafford Housing Trust which includes a nursery, library, optician, hair and beauty hub, two GP practices, and one and two-bedroom apartments for people over 55 who need an element of care. This is clearly the result of the sort of joined-up thinking you might expect from Robinson.

Brought up in an all-day corner shop in Chadderton, Robinson was a grammar school girl who went into nursing and midwifery and worked in A&E for many years. But, she says, she was always curious about how people got on when they left her department. She was always thinking more broadly, and was always ambitious. Robinson later managed a major project for travellers and homeless people and saw the discrimination they experienced. 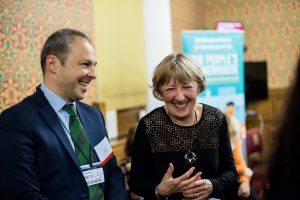 Nevertheless, Robinson felt that she understood power and knew that, if she wanted to effect change, she would have to do it through leadership. So she took various promotions until making the leap to manager of a large psychiatric hospital. She knew nothing about psychiatry and was able to ask the obvious questions: why do we do it like this, why can’t we do that?

Robinson closed many of the wards where people had lived for a long time and been completely forgotten. These were people “who were amazing but lost in the mists of prejudice and institutional behaviour, and no money, no hope and no ambition on their behalf”. They were successfully returned into their own homes in the community. She says driving change there was the hardest job she has ever done, and after four years she was exhausted and had to move on to something else.

So she moved to the Health Authority in Manchester where she opened a couple of health centres that looked and felt different – the Kath Locke centre in Hulme is one – and created NHS networks, a best practice website for health professionals now used by 70,000 people every week. Then she went to London to work as a policy adviser.

Seven years ago, Robinson returned to the North and took up her current posts. She is extremely proud of the achievements at The Big Life, which she attributes to Fay Selvan, the chief executive. The organisation’s budget has grown impressively (from thousands to millions), it owns Big Issue North, and has nurseries, schools and mental health sanctuaries across Manchester. 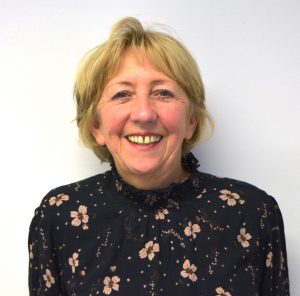 Robinson says: “The system keeps talking about the need for these services, but where were they? We put a tiny amount of money at risk into opening the sanctuaries, and gradually the system picked them up. The system is too clunky to be creative. Working in communities we pick up need before the system, and then the data comes, and then the politics comes.”

Of her new role at the People’s Powerhouse, a movement which aims to shape the debate around the Northern Powerhouse to ensure people and communities are at the heart of plans for the North of England, she comments: “The North is an amazing place and its potential has never been fully realised. We can think about the chunky infrastructure it needs – we do need to get to places faster and easier – it is a nightmare, many of those communities feel isolated. But we also need to know why we’re going there.

“The People’s Powerhouse is a network we will wrap around the narrative that’s emerging and will bring a heart to it. I’m in it for the solutions. We will connect people from the East and the West to come together. Where local best practice is in one part of the North, we’ll be connecting that to another part. We want to give a kitemark to good practice around looking for solutions across the North, rather than the same old ‘if you’re known you get invited’ and you end up with a narrow group of solution finders. We want people to feel brave and energised about connecting more broadly. I believe in scale. I believe in connecting as many people as possible.”

What does Robinson think the problems are? 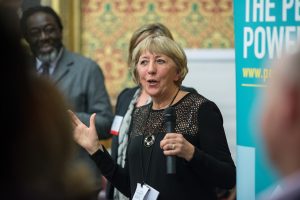 “We’re going to create a Northern economy and we need to keep the money in the North. We don’t want to see major corporates using us as a low-paid work force and taking money out of the North.

“The transport links are essential, but we have got the economic power and ability to grow our own prosperity. It’s about not allowing ourselves to be restricted by what has gone before. We have a younger generation that sees the world differently, and we now need to think differently.

For more information about the People’s Powerhouse, you can register for its newsletter, event updates and offer support at www.peoplespowerhouse.org.uk