The Library Theatre Company, Manchester, has a superb reputation. Attending their production of Willy Russell’s Educating Rita at The Lowry, I had high expectations. They were not met – they were surpassed with accomplished theatrical finesse.

This is a comedy replete with British humour and ironic wit, yet with some very serious undertones, particularly – as the play’s director Chris Honer puts it – “about the transforming power of education.” I love how the tables are turned; Frank’s disillusionment with, perhaps even hatred of, academia contrasts markedly with Rita’s initial ignorance of it, and later her passion for education. It’s a bubble Frank yearns to escape, but which Rita is gradually absorbed by. These conflicts, as with most great theatre, are what make things tick.

Performed in The Lowry’s Quays Theatre, the moment I took my seat I was captivated by the appropriate and very real set; it was perfect for the business of the play and a good reflection of the era. On a more elementary level, it looked great. Designer Judith Croft did a great job.

With Philip Bretherton as Frank and Gillian Kearney as Rita, the production was cast perfectly. I’ve seen Kearney act before, in the BBC’s Casualty as well as in the Liverpool Everyman’s production of Macbeth. Her portrayal of Rita confirmed my existing feeling that Kearney is a very fine actor indeed, with considerable versatility and savoir-faire. As a discontented working class Liverpudlian hairdresser, the progression of her character through educational self-improvement was clear to see. Bretherton’s adroit portrayal of an impassioned alcoholic, at times paranoid and always lacking in self-esteem, was spot on. 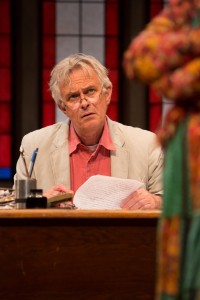 For a two-hander, the performance was fairly long – around 115 minutes. Any actor with the stamina and ability to tote a character in the palm of their hand for such a length of time on stage is made of stern stuff. Here we have two actors who had clearly worked very hard to get through rehearsals, and it really, really showed. I take my hat off to them.

It is abundantly clear that the play’s discerning director expertly guided these great actors through a funny, brilliantly written play, to the extent that I say with confidence this production is a real triumph.

In short, I had a great evening. For avid and sporadic theatre-goers alike, Educating Rita is a must see. Whether you want my advice or not, you’re getting it; go and see the play. You won’t be disappointed.

In conjunction with this production of Educating Rita, Manchester Metropolitan University and the British Theatre Consortium are running a brand new exhibition, The Spirit of Theatre, as a celebration of all things related to The Library Theatre Company. Full details can be found at http://www.spiritoftheatre.org.