I love Christmas but, even as a self-confessed fan-girl of all things yuletide, I need a break from the host of festive shows currently doing the rounds. Enter Manchester’s HOME which, as part of its Christmas programme, has something different on offer this December.

Hot Brown Honey is difficult to define. Part dance, part poetry, part comedy, part circus – with a great big dose of song and striptease popped in for good measure – it’s a triumph of a show.

“It’s a lot of fun, but very loud,” I’m warned as I collect my tickets from the box office. And very loud it is. Throughout the show we’re frequently invited to ‘make noise’ – stamp feet, clap, shout back, raise our hands – which is brilliant fun but also serves a purpose. The cast and audience are literally clapping back.

It’s more club vibe than theatre and it’s brilliant (although, if I’m being picky, at sometimes it was so loud that I struggled to hear some of the spoken parts which included quotes from writers such as Chimamanda Ngozi Adichie and Maya Angelou). As we take our seats, my friend turns and asks in delight “is that a Beyoncé song?” and I’m equally thrilled when we realise that it is. It’s quite possibly my first trip to the theatre where Queen B is blasted out through the sound system on arrival. 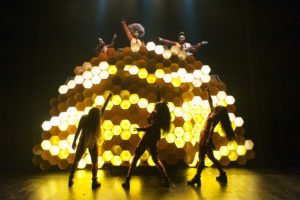 The cast – hailing from Australia (a mix of ingenious Australian, Samoan, Tongan, Maori Indonesian and African heritage) – introduced themselves to the crowd prior to the show, milling about and chatting to us about where we’re from and what brought us to the show. Honestly? I knew little about what the production entailed but, from what I’d heard, I knew I was going to love it. And love it I did.

Hot Brown Honey is a fast-paced, sexy, hilarious show and the all-female cast are a seriously talented and fierce bunch. But it’s more than just good entertainment value. Behind the glitz of the huge golden beehive and the sassy dance routines, there’s an important message which seeks to confront and challenge our perceptions of racial stereotypes and sexism. 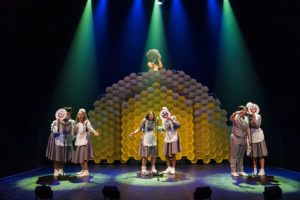 From the beginning, we’re warned that we might feel a range of emotions from the depth of our stomachs including sadness and guilt, and it takes next to no time to see why. From the singer dressed in a golliwog costume and a stunning dance routine which involved one cast member breaking free from the constraints of an Australian flag to the frequent mention of tourists going to other countries and behaving like…well…Brits abroad (although they weren’t as kind in their choice of phrase).

The portrayal of domestic violence – even more poignant considering the conversations we’ve been having recently – was depicted in a raw and stunning display of acrobatics. I sat mesmerised as one of the incredibly talented cast stood alone on stage screaming, tearing at her own clothes, before being silently cast into the air with only two straps for support. She was tossed and thrown around before us with no safety net to catch her should she fall. It was an incredibly powerful metaphor and almost moved me to tears.

As part of the presentation of Hot Brown Honey, the show is touring with One Million Stars to End Violence, folded paper stars which are on display in the corridor leading to the theatre. These stars are symbols of “light, courage and solidarity to end all forms of violence, including violence against women, bullying, and racism”. 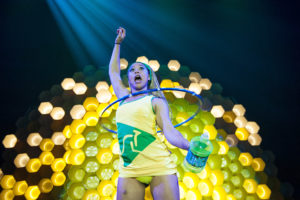 I can’t recommend the show highly enough and I still can’t explain exactly how it made me feel. Perhaps it’s because the subject matter will resonate with audience members in different ways? All I can say is go and see it. And take your friends – both ladies and gents (there were a group of fellas in front of me who were having an absolute ball).

It’s a ground-breaking performance, and I don’t say that lightly. Hot Brown Honey are on to something here. There’s so much frustratingly negative talk surrounding women speaking out in our current society and, quite frankly, it’s beginning to get on my nerves. Hot Brown Honey are using their voice as they damn well please, raising it defiantly – decolonising and moisturising – and they make fighting the patriarchy look like so much fun.

Hot Brown Honey is on at HOME until December 23, 2017. For more information, or to book tickets, click here.