There seems to be a glut of Red Riding Hood productions this Christmas. For the life of me, I can’t understand why. Perhaps it’s the time to tell traditional fairy tales? Or maybe theatre producers have their eyes on touring schedules that extend beyond the Quality Street season? Whatever the reason, there are a lot of yarns focusing on a young girl with a vibrant cape, a bedridden Grandma and a hungry wolf.

Today I took my five-year-old niece to HOME’s offering in Manchester. Produced by Little Angel Theatre, the team behind last year’s Wow! Said the Owl at the same venue, Red Riding Hood and the Wolf is, at 50 minutes, just the right length for a young audience. The marketing bumf says the show is suitable for children aged six upwards (with only two months to go until my niece’s sixth birthday, I reckoned I was on safe ground) but that didn’t stop numerous parents from bringing babies. Decorum prevents me from saying how I really feel about this or, for that matter, my thoughts on the family next to me who had each brought a packet of Tic Tacs, that well-known silent theatre sweet of choice (hell is other people, right?). Nevertheless, my niece and I ensconced ourselves on the front row and waited for curtain up (metaphorically anyway, this was a studio theatre). 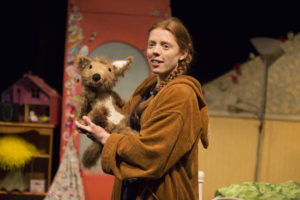 The next 50 minutes had the audience enthralled (not counting the babies and Tic Tac munchers) and, as shows aimed at little minds go, it worked. With just one actor on the stage (Charlotte Croft) and a script by Jon Barton that turned the traditional Little Red Riding Hood narrative on its head, this was the Brothers Grimm for the 21st century, all friendship, acceptance and overcoming prejudice. And it worked. When, on the way home, I asked my niece to name her favourite character, she picked the wolf. So no sugar and spice in this show which, to be honest, is no bad thing.

While the production is a triumph of imagination thanks to ingenious use of everyday objects to convey well-known characters, it lacked the gentle magic of Wow! Said the Owl. And, although my niece insisted she loved the show, she spent around half an hour squirming in her seat, something she rarely does at the theatre. Like me, she enjoyed the clever and simple puppetry but I couldn’t help feeling that something was missing. Who knows, maybe it was the original text? Having said that, as an Aunty I’m glad to have spared my favourite girl from a story involving maiming and the eating of children.

Red Riding Hood and the Wolf is at HOME until December 16, 2017. For more information, click here.