Elbow played Manchester’s Phones 4u Arena on Wednesday night to a crowd of almost 20,000 and pulled off a spectacular trick. They made it feel like an intimate gig.

On the back of their first number one album in the UK (I know, I couldn’t quite believe that either), the band is in the middle of a UK tour, followed by a visit to the US and a summer packed full of festival appearances. Catch them wherever you can – they are at the top of their game. 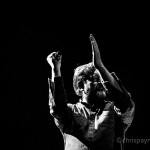 In a set made up of several from The Take-Off and Landing of Everything, and highlights from their previous three studio albums, they embarked on an emotional journey and connected with the audience in a way only they could. The evening’s performance (and that of Jimi Goodwin, who opened with a cracking selection from his first solo album Odludek – his Terracotta Warrior is one of my songs of the year so far) was dedicated to Steve Lloyd, sound engineer and Roadhouse co-owner who died last week. The Night Will Always Win, a lesson in how to cope with loss (not on your own, not after hours) was tribute enough. A delicate and touching rendition which rendered the arena silent.

They followed it with New York Morning, the first single off their new album. I loved this when I first heard it and it’s grown on me. It’s fast becoming one of those songs you feel you’ve always known. 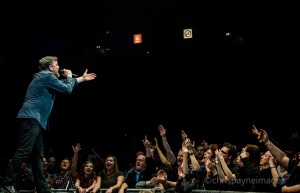 During the mid-section of the evening (and following a Mexican wave which involved an inverse wave on the floor with a difficult centre split – a bold manoeuvre managed effortlessly by the crowd), Guy, Craig and Mark took the short walk down to the B Stage (or the ‘Vanity Thrust’, as Garvey accurately describes it). Acoustic versions of Great Expectations and the gorgeous Blanket of Night created a melancholy calm which was then built up with the full band joining in on a sparkling Mirrorball. Momentum continued to build with my personal favourite of the evening – The Birds. It just kept building and building, layer after hypnotic layer. Garvey’s voice sounded better than ever – husky and effortlessly tuneful, it has now matured into a beautiful rich sound, almost cello-like, with a strong falsetto. Special mention also goes to Rick Jupp whose sensitive and intelligent drumming drives the sound along and avoids every easy or obvious choice. 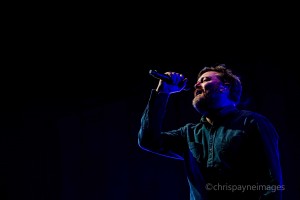 Following a particularly rousing and participatory version of Grounds For Divorce, the set finishes with an unexpectedly chilled song choice. My Sad Captains finishes the new album and is probably the most accomplished track on there. There is a satisfying neatness to the songwriting and this particular performance is just stunning.

Starlings is the first of three encores and is followed by Lippy Kids. Time was when this was the only song to send my son to sleep in the car. Now four, he sang it to me this morning. This is the highest praise I can offer.

One Day Like This is now the ultimate finisher and lifted spirits even higher, if that was possible, the arena resonating and resounding with one voice.

Over the course of the evening it occurred to me that they really do have a fondness for the skies, and flight – birds, starlings, stars, rockets. 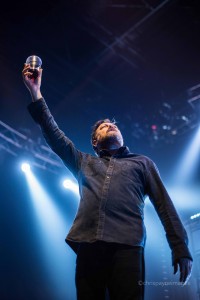 Where:  Phones 4u Arena, Manchester and touring