There’s an air of sadness at the end of a festival weekend as tents are packed up and the latest voguish accessories are put away (this year: glittery pleated capes, peaked caps and elaborately large feathers). But by Monday morning at Festival No.6 there’s a palpable extra layer of melancholy. The festival’s future is uncertain, with nothing planned for next year and much talk of this being the last ever No.6, at least “in its current form”. To name-check another festival, it’s the end of the road.

Not that the festival itself felt in any way half-hearted, though. Aside from a couple of the smaller performance stages being dropped, this year’s No.6 offered the usual eclectic mix in terms of line-up. Over the years the festival has continued to evolve, tweaking the programme and the layout, and it’s tempting to suggest – or is it just sentimentality? – that it was all starting to fall into place. Yes, there were still niggles (why does the main stage feel like a bolt-on to the rest rather than the heart of it? How come the screen in the Gatehouse is too low to be seen in full anywhere but the front row?). At best though Festival No.6 had developed its own distinctive identity. Like its cultural touchstone The Prisoner, the festival celebrated individuality.

This year, there were plenty of moments which encapsulated that: a storming set by The Lovely Eggs in a rammed-to-capacity Tim Peaks bar; Welsh legend Meic Stevens leading something akin to a joyous village hoe-down with everyone born hereabouts mouthing along to every word; steadfast No.6 favourites the 50-odd strong Brythoniaid Male Voice Choir regaling a huge crowd in the central piazza with a blend of traditional Welsh song and stirring covers including Rag ‘n’ Bone Man’s Skin and the Manics’ A Design for Life.  Then there’s a percussion-heavy performance piece in the piazza by Stealing Sheep and a team of trained volunteers celebrating a century of suffrage. Its precise meaning was oblique but its intentions were clear, and the audience was enraptured. It’s worth noting that Stealing Sheep don’t currently have a new album to plug – in fact, they didn’t even perform any of their own songs – and this commitment to art for art’s sake, rather than for naked commerce, is much to be applauded. 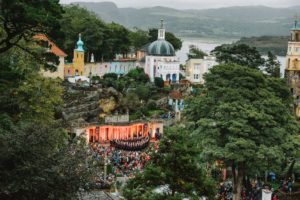 The Grand Pavilion stage was perhaps consistently the best, playing host over the three days to delightful acquired tastes and upcoming talents. Early on, A Certain Ratio get the punters moving with easy elan, peaking with Shack Up, whereas Ride’s dreamy sheets of guitar conjure the songs that made their name – Vapour Trail, Leave Them All Behind – as well as decent new material (although it’s arresting to note there’s no longer a single floppy fringe in sight, let alone a short-sleeved t-shirt worn over a long-sleeved one).

Here in a big tent Gwenno’s cross-lingual synth pop lacks some of the detail and delicacy it has on record, but nevertheless it remains beguiling, building to an audience singalong of Eus Keus? conducted in Cornish. Django Django are well-honed beat-centric audience-pleasers with enough strangeness and charm in the mix to lift them well above their peers. 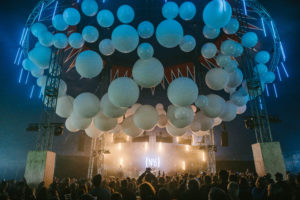 On the final night, Baxter Dury really impresses, his Gainsbourgesque songsmithery delivered with a much more satisfying helping of showmanship, character and craft than most of his contemporaries. To follow, Anna Calvi creates an almost intimidating stage presence, but as with the songs themselves, it can come across as one-note, aiming for full-on burning intensity just a little too often. She does close the set with a nifty cover of Suicide’s Ghost Rider, mind.

By way of stark contrast, the main stage line-up is only fitfully so exciting. For one, Hollie Cook’s dubby pop provides a fillip to the soul after a rainy morning. Not even the security staff can resist a sneaky skank. But too many of the bands here are pleasantly slick acts somewhere on the indie side of mainstream, with a lazy tendency towards bouncy frontmen, busy polyrhythms and ADHD bass-lines (looking at you, Friendly Fires and Everything Everything). Infectious, yes, but the norovirus kind. The Sunday dinnertime chill-out slot was filled this year by Motown and Northern Soul classics performed by Manchester Camerata with guest vocalists, and while they’re undoubtedly done with skill, it’s all a bit, well, soulless. Mind you, there is the matter of getting bums on seats, or rather on foldable stools, and not everyone wants the latest thing in industrial noise wafting at them over their mac and cheese. 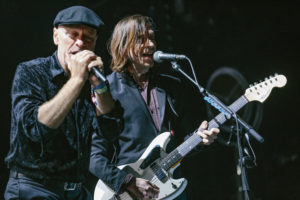 An undoubted highlight is The The’s main stage headline set on the Saturday night, the path having been well prepared by a screening of the Inertia Variations documentary and a separate on-stage interview with Matt Johnson in the Tim Peaks bar earlier in the day. The set itself starts gingerly – will their gnarled introspection hit the mark with a festival audience? – but it soon clicks into gear and has middle-aged couples gazing into each other’s eyes while singing along to the lyrics of Heartland, an unexpectedly touching sight. Equally unexpected is the plug being pulled on the set due to the curfew just as Johnson is midway through introducing the final song. The crowd howls, coping this might be rectified, but it isn’t. Whispers the next day say that the lost song was due to be the mighty Uncertain Smile. Curse you, curfew.

On the Sunday night, The Charlatans are the penultimate main stage act. Long-time friends of the festival – surely, they would have made fitting final headliners? – their barrage of good-time hits is pretty much irresistible, and Tim Burgess remains a likeable soul despite not possessing anything you could honestly call a singing voice. Following them, Franz Ferdinand takes us back towards that pleasantly professional blandness, having long since found a formula (angular guitars, rhythms you can leap on the spot to) and stuck to it. Still, certain of their songs, such as Take Me Out, can hit the spot in this environment and at least singer Alex Kapranos does the foot-in-the-monitor thing whilst sporting a McGoohan-in-The Prisoner blazer. At the end there’s a genuine and admirable attempt to bid Festival No.6 a fond farewell from the stage. 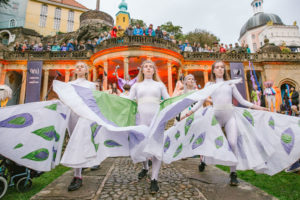 Except, directly after this, back again in the jam-packed Tim Peaks bar overlooking the main stage, there’s a less showy, more heartfelt farewell as festival friends Yucatan perform gliding, delicate post-rock taking in their celestial Welsh language cover of The Beatles’ Across the Universe. It’s all unique and characterful, and in that respect, it seems to capture the essence of No.6 in the same way that the male voice choir and Meic Stevens did and your Friendly Fires and your Franz Ferdinands didn’t. It’s actually a perfect sort of moment.

It’s tricky to balance art and commerce, and over the years there’s been a sense that No.6 has struggled to square its ambitions within the festival marketplace with the need to protect the uniqueness and soul that gave it life in the first place. Its intentions have always seemed admirable, though, and it has minted many memories of creativity, music and sheer fun. If anything, in its seventh year it seemed to be getting the balance right more than ever.

Be seeing you, then? One would certainly hope so.

With thanks to Ben Palmer