His last feature film, Inland Empire, was released more than ten years ago, back in 2006. Though it had much to recommend it, there was perhaps a sense of creative batteries starting to run dry. In subsequent years, Lynch seemed to have lost interest in filmmaking altogether, and instead focused his attention on other disciplines – painting, making music, designing furniture and tirelessly promoting Transcendental Meditation. Lord, but cinema missed him.

There’s still no sign of a new feature film, but Lynch has directed and co-written a belated third series of Twin Peaks, episodes of which are currently airing weekly. Running at a total of around 20 hours, the series is almost as long as his entire cinematic output combined. It’s something like a second career for him. There were understandable concerns as to whether Lynch would still have it after such a long lay-off. Thankfully, the series so far has been mind-fryingly good: the work of a pure, uncompromising artist. 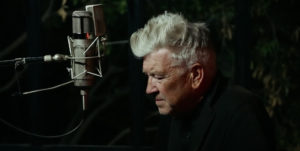 That’s the figure that’s portrayed in this new documentary, David Lynch: The Art Life. The title is perfect. Essentially what we see is Lynch, now 71, going about his daily routine: smoking, swearing, operating power tools and making art in his home studio. It’s not unlike watching your Grandad pottering about in his shed, assuming that your Grandad made Blue Velvet back in the day.

Director Jon Nguyen has recorded a whole series of conversations with Lynch about his childhood, youth and journey to filmmaking. The result, at heart, is a feature-length interview. The interviews are all off-camera, though. The accompanying visuals are mostly of Lynch at work, lingering long on his fascinating face, now resembling Samuel Beckett after a few hearty meals and some laughs. It’s also peppered with a haul of private film footage, photographs and his finished artworks. All told, this creates something like a window into Lynch’s soul, or at least as close as we’re likely to get.

Lynch can be a tricky figure who appears to be a lot more open than he actually is. His bone-dry sense of humour can obscure things, too. In a BBC Scene by Scene interview in 1999, Lynch told Mark Cousins in all earnestness that he believes every film has a key scene where everything is crystalised, which he calls ‘the eye of the duck’. He absolutely meant it, though. These days Lynch is a lot looser and more straight-ahead, and he can even be seen here playing with his little daughter Lula. For the Lynch faithful, these peaks behind the scenes will be thrilling. It’s a slightly limited intimacy, though. At other times his youthful recollections tails off entirely, and while the film resembles a curious sort of ‘day in the life’, his wife, actress Emily Stofle, is nowhere to be seen. You feel that Lynch only lets us in precisely as far as he wants us to and keeps his secrets as he sees fit. 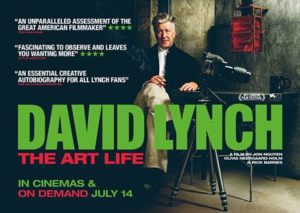 Of course, there’s a real risk of the documentary ending up as somehow merely sub-Lynchian. Thankfully, it’s all cannily done and manages to create some admirable moments of stillness and beauty, without ever losing sight of the fact that Lynch is the true artist. Only an occasional flourish of the score, something Lynch knows exactly how to deploy, comes across as clumsy or ill-judged. The pace is perhaps on the over-languid side at times, though, and arguably there’s nothing in the conversations that really pushes or challenges Lynch. He remains a deeply controversial filmmaker for some, but answering up to his critics is just not really the name of the game here. It’s his own impressionistic account of his working life, an oblique kind of character study, which will surely appeal directly to his existing admirers rather than looking to win him any new ones.

On paper, this could possibly have ended up as something like a generous DVD extra, but for all of its occasional flaws, it’s far more satisfying and accomplished than that. The story it tells stops right after the making of Lynch’s first full-length film, Eraserhead, and there’s no mention of Twin Peaks either old or new. Curiously, though, it is a timely piece. As Twin Peaks viewers will know, the new series strays into territory that’s more like his early short films than anything he’s made since. It’s a delight to have Lynch back, and The Art Life makes a feature of the fact that he’s just good value and a remarkable figure to spend time with.

David Lynch: The Art Life is showing at HOME from July 14, 2017. For more information, click here. For details of showings across the country, check local listings.