Of the many and varied responses to the news that a Morrissey biopic was being made, probably the most salient can be summed up thus: “Oh no, please don’t encourage him”. Because Morrissey’s real-life story has become an increasingly frustrating one. At the dawn of The Smiths, he was a fascinating, unique figure, a gifted outsider who’d finally found his true vocation. Today, though, his stock has fallen very low, through a combination of underwhelming album releases, ill-judged forays into the literary world and frequently bizarre, aggravating public statements. (Paraphrasing here, but very roughly: ‘Animals are loads better than humans, although that Nigel Farage has some good ideas.’)

The film, England is Mine, is now here, and it has quite a job on its hands. To its enormous credit, it pretty much pulls it off. It takes as its focus a very specific time span: the late 70s and early 80s, as Morrissey leaves his teenage years behind. There’s not so much as a mention of The Smiths, as the band had yet to even be formed at this point. Instead, it leads Morrissey onto the launchpad for his future fame. It’s effectively a Smiths prequel, like a secret origin story.

One hurdle here is that it’s difficult to dramatise years of loneliness and frustration very effectively.

Suffocating solipsism doesn’t exactly leap off the screen. The film has scattered moments where, say, Morrissey is alone in his bedroom late at night, sitting at the typewriter surrounded by scrunched-up misfires, but for the most part it navigates around such whopping great clichés. Instead, it constructs a slightly disjointed narrative around a loose assemblage of friendships and opportunities, a slow clash between the hated world of drudgery-filled work and the beloved world of music, through which the figure of young Steven drifts. 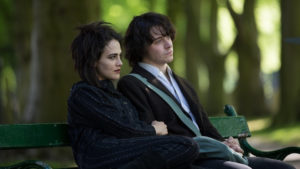 In the early scenes, he seems rather outgoing for an introvert, and we’re never exactly guided towards reasons why he struggled in life in quite the way that he did. But once it builds up a head of steam, this becomes a very engaging tale of a troubled young outsider on a voyage to discover himself, though it’ll be interesting to find out whether it still connects with audiences who neither know Morrissey nor give a stuff about him.

It’s intelligently, elegantly directed by Mark Gill and the screenplay, by Gill and William Thacker, often works wonders. Without the rights to feature Morrissey’s music, it relies instead on a soundtrack featuring the kind of bands – Mott the Hoople, New York Dolls, the Shangri-La’s – which were on heavy rotation round 384 Kings Road during the period. There are moments of bleak lyricism though in general it’s on a much surer footing as a wry, spry-footed outsider comedy rather than a searing drama. Despite some corking lines, and it’s often very funny indeed, there is some toe-curling greetings card-style dialogue here and there. The visuals could occasionally do with being even bolder, but it certainly manages to conjure up the arse-end of 70s Manchester. Never has Stretford Arndale underpass looked quite so cinematic. Like 24-Hour Party People and Control before it – together, the three films form a kind of triptych of Manchester music, in fact – this also offers yet another take on the Sex Pistols’ epochal Lesser Free Trade Hall gig in June 1976. Curiously, though, other than a couple of fleeting references, nothing is made of Morrissey’s own personal love of cinema, particularly the French and British New Waves. It might have been intriguing to see those influences permeate the look of the film itself. 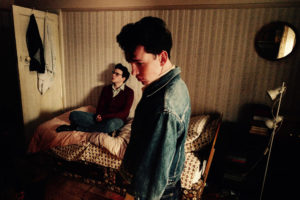 Above all, what really makes this sing is a sterling performance by Jack Lowden in the lead role. He’s no lookalike – strangely, he’s the spitting image of a young Syd Barrett instead – but Lowden conveys all the ennui, fierce intelligence and quiet desperation of the young Morrissey. Wilful and awkward he may be, but nevertheless he’s portrayed sympathetically as a vulnerable character to invest in and root for. In making the confused, self-loathing figure so magnetic, Lowden gets right to the heart of what went on to make him so cherishable to legions of fans. In truth, none of the figures in his orbit – not his friends Linder Sterling (played by Jessica Brown Findlay), Anji Hardie (Katherine Pearce) and workmate Christine (Jodie Corner), nor his immediately family – really register all that much beyond forming a Greek chorus of alternating approval and disapproval for him to react against.

There’s a real danger in telling the story of such a singular soul that the narrative naturally takes sides and misses out lots of nuances. Effectively this is skewed towards Steven Morrissey’s perspective, so it’s biased by definition. It leans towards being binary, where all the characters are either goodies or baddies, with the goodies being educated free-thinkers, while the baddies don’t like books or art and probably have right-wing views. (No, wait, hang on…)

Die-hards may quibble that the facts have been tinkered with too freely, with real-life figures drastically revised, telescoped together or deleted completely. (Long-time Morrissey associate James Maker has already dismissed the film as ‘not a biopic, but historical fiction’, though it’s hard to know what the difference really is in practice.) But this succeeds in summoning up a time, a place and a person in a manner which is, for the most part, touching and genuinely compelling. In short, it’s far better than it had any right to be, and Lowden and the team should be applauded for making Morrissey seem much more agreeable than the man himself has managed to for quite some time. 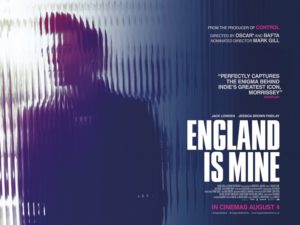 England is Mine is on general release from August 4, 2017.

Screenings at HOME in Manchester.