Ramsbottom is the best place ever because… 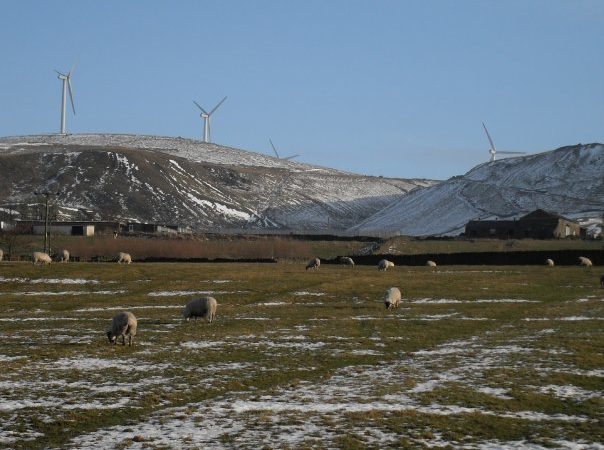 … erm, it’s probably not enough to say that Rammy (as the locals would have it) is ‘dead good’. I mean, it is. It’s proper good. But loads of people think that about the place they live in. Why should you listen to me?

Well, there’s the fact that I moved here by mistake. After nearly 15 years, I was desperate to leave London. I’d lost touch with my Northern roots (born in Bury, brought up in Whitefield, educated in Newcastle) but in the intervening years my parents had moved, respectively, to North Bury and Helmshore. When I returned home, I had no idea where I’d be working but I figured I needed to be near the M62. That way I could reach Manchester, Liverpool and Leeds relatively easily. And so, while I sat unhappily in a London newspaper office, my thoughts drifted to Ramsbottom, a small market town perched on the cusp of the makey-uppy metropolitan county of Greater Manchester and the centuries-old Lancashire. I knew nothing about the place, save a vague recollection of a family member’s birthday meal at an Italian restaurant in the town some years previously.

It’s now seven years since I moved to this Lancashire idyll. Here’s my Rammy Top 15. 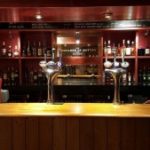 1. Best Pub: The Shoulder of Mutton 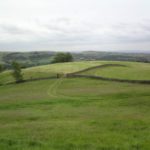 If you live in the centre of Ramsbottom, you’ll need crampons to reach The Shoulder of Mutton. Situated at the top of The Rake (a street so steep it’s closed at the first sign of frost), this absolute gem of a pub dates back to the 18th century. Back then it was a noted centre for cock fighting and later became the local fox hunt’s hostelry of choice – thankfully neither of these so-called sports are much in evidence in The Shoulder these days. But it is well known as a dog walker’s local and is so much the better for that. Anyone dropping in after 4pm on weekdays or over the weekend is likely to find a jumble of canines and their owners. The food is pricey and the ales on tap can be found cheaper down the hill but that’s almost by the by. What you’re paying for here is the pub, not least because the current owners instigated a ‘defurb’, righting the wrongs implemented by previous landlords which, for such a beautiful building, were heinous.

I’m salivating just thinking about Ramsbottom’s monthly market. Clustered around the town’s Fallen Urn (of which more later) and crammed into the Civic Hall, the commonly-known Farmers’ Market is a Sunday joy. The aroma of bacon butties, sausage sandwiches and veggie wraps drift around the town centre, a culinary come hither for anyone in the vicinity. But there’s a lot more to it than that. Think delectable cheese, organic vegetables, artisan choccies, Italian deli delicacies, French breads, Caribbean cuisine, Indian dishes and so much more. There’s also a wealth of photography, craft beauties, handmade cards, vintage furniture and, and…I could go on and on. 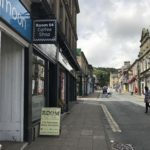 Want to go to a place where everybody knows your name and serves really good value fry-ups? Look no further. From the outside, Room 54 is an unassuming wee caff, jostling for position with flashier, bigger eateries. But a recent refurb and a long-standing commitment to proper food at proper prices means that it’s my first choice for that hangover brekkie and lunch. There’s nothing fancy here, thank god, but, judging by the owner’s chats with customers, it’s clearly a local favourite. There’s the additional bonus of veggie options, not always a given in the North of England. 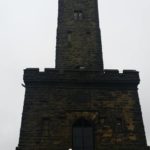 Ah, Holcombe Hill and Peel Tower. Anyone who lives vaguely near Ramsbottom knows this monument – it sits proudly on the edge of the local hill (think mountain if you take the ‘hard’ route towards the peak and are vaguely unfit). The obelisk was built in 1852 to commemorate Bury’s most famous son, Sir Robert Peel, Prime Minister in the mid-19th century and founder of the modern police force (he gave his name to ‘peelers’ and ‘bobbies’). The story goes that after a substantial sum was raised to erect a stature of Sir Robert in Bury town centre (still very much in evidence outside Bury Parish Church although thankfully the men’s toilets have been filled in so Sir Robert no longer points to the entrance), a few hundred pounds was left over. Hence Peel Tower. Every so often local charities take over the tower and charge super-low sums to climb to the top. But if the tower is closed, it’s still worth the hike – the views are magnificent. 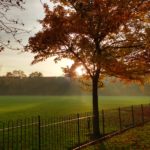 And relax. Nuttall Park – or as I’ve now come to call it thanks to my five-year-old niece, Nutty Park – is a ‘and breathe’ sojourn out of a busy day. With a top-notch children’s play area (with plans to expand), tennis courts, a bowling green, and a café, not to mention the endeavours of Ramsbottom’s Incredible Edible and multiple events throughout the year, this green space is a much-loved destination. What better thing to say about a park than it’s a place you want to visit again and again?

Heritage railways have become a bit of a thing in recent years. But the East Lancs Railway punches above its weight both in terms of visitor numbers and publicity. Running between Bury and Rawtenstall with an average one-way journey length of 45 minutes, we’re not talking the Trans-Siberian Railway here. But there is charm aplenty and a wealth of activities including Thomas the Tank Engine days, evening dinners, and Santa Specials (always a sell-out). I live halfway up a local hill but the ‘choo-choo’ of the steam trains are audible in my back garden – and very welcome too. And the East Lancs Railway was host to the iconic Flying Scotsman back in January 2016, its first journey on the rails in a decade. 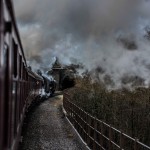 The Christmas Markets in Ramsbottom are something to be seen. You’re guaranteed oodles of festive fun throughout December and, in some years, there’s a Dickensian slant. There’s a reason for this: the Grant brothers. Originally from Scotland, the Grant family journeyed south in the 18th century in order to find employment in the cotton mills of Lancashire. Eventually the surviving siblings (William and Daniel) built up a successful textile business. Today their name lives on in the Grant Arms and in other local monuments. The story goes that Dickens used them as the model for the kind-hearted Cheeryble Brothers in Nicholas Nickleby. It’s certainly true that the Grants were regarded as caring and generous employers. 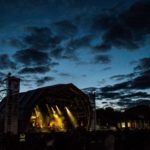 Northern Soul has been in attendance for the Ramsbottom Festival since year zero. That’s getting on for seven years, and it’s still our favourite time of year. Rammy Fest (as the locals call it) is quite simply the loveliest, bestest festival ever. As a Green Man and Latitude veteran, I know the gorgeousness of well-run, family-friendly events but there’s summat about this festival that gives me a sense of enormous well-being. Whether it’s the stellar line-up of acts across three days, the plethora of enticing food stalls, the affordable ticket prices or the family-friendly activities, Rammy Fest has it all. Previous headliners include Sinéad O’Connor, Julian Cope, The Magic Numbers and Fun Lovin’ Criminals, but it’s often the smaller bands that strike a chord. That’s the unique appeal of this festival: it’s a smorgasbord of international, national and local talent.

Come on now, how many small Northern towns have a fuck off modern art object of loveliness slap-bang in the centre of things? Ramsbottom does, and it’s quite the eye-catcher. Unveiled in Market Place in 1998, the bronze centrepiece was the result of a £250,000 National Lottery grant. Designed by the acclaimed sculptor Edward Allington to symbolise Ramsbottom’s historical association with water (the town sits on the River Irwell) and its industrial heritage, this is an outstanding addition to Rammy. What town other than a totally brilliant one says, I know, let’s commission a huge urn to celebrate our history? As Keats so rightly said, “A thing of beauty is a joy for ever.” 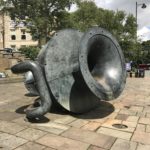 10. Best Walk: Behind my House 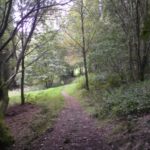 For a town nestled in a picturesque valley with views of the West Pennines, there are walks aplenty here. From the Irwell Sculpture Trail to the multitude of guided tours, I can confirm that groups armed with laminated maps and cagoules march past my house on a daily basis. But I’m most likely to dust off my walking boots for the short and special path behind my house. If you live in Ramsbottom, it’s stupidly easy to escape roads and traffic. In a matter of moments, you can meander through trees and secluded walkways. Heaven.

In a world beset with savage cuts to the arts and an unjustifiable chasm between culture funding in the South (for that, read London) and the North, just keeping theatre doors open is an achievement. Thankfully the Summerseat Players manage to do just that from their base at Ramsbottom’s Theatre Royal. Now in their 49th season, they’ve even managed to refurbish their building (a recent £400,000 project comprising fundraising, loans and Arts Council funding). Well done that company. 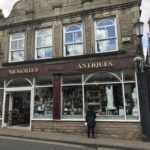 Oh my lord but here’s a gem. So good it’s a regular stop-off for the boffins from TV’s Antiques Road Trip, Memories Antiques is a veritable treasure trove. Yes, Alan Titchmarsh’s book Nobbut A Lad regularly graces the window, but don’t let that put you off. If you’re prepared to spend some considerable time wading through two floors’ worth of vintage and antiquey goodness, you’ll be rewarded. Yes, there’s a fair amount of tat but that’s in the minority. My god, but I love this place. I still regret not snapping up that Victorian page turner.

When I lived in London, bird song was a rarity. And I didn’t count the anguished cries from blue tits brought in by the cats. Now there’s a daily cacophony of trilling from the North West’s bird population. Sure there’s a wee forest behind my house which is a natural home to birds, but I also live on a popular road and the motorway is in hearing distance. But the birds, the birds. God bless them. 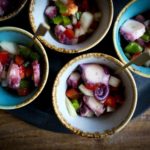 As someone who lived in that there London for 14 years and, as a journalist, lived way beyond her culinary means thanks to inordinate amounts of corporate hospitality (I’ll never forget the time Gordon Ramsay winked at me), discovering that Rammy’s Baratxuri served THE BEST FOOD EVER was a welcome surprise. Holy moly but this Basque Pintxo bar and (new) dining room is at the top of its game. Sister restaurant to Levanter (just round the corner and a favourite of food critic Jay Rayner), I’m lost for words to describe the perfectly-formed dishes, exemplary service and, considering the quality on offer here, the affordable menu. 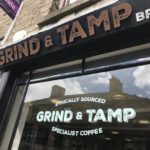 Until recently (last year), Ramsbottom was a bit rubbish when it came to proper coffee. While I’ve no desire to see my town become a mini-Northern Quarter enclave, there’s a lot to be said for quaffable coffee. And now there are at least two places dedicated to the wondrousness of the coffee bean.