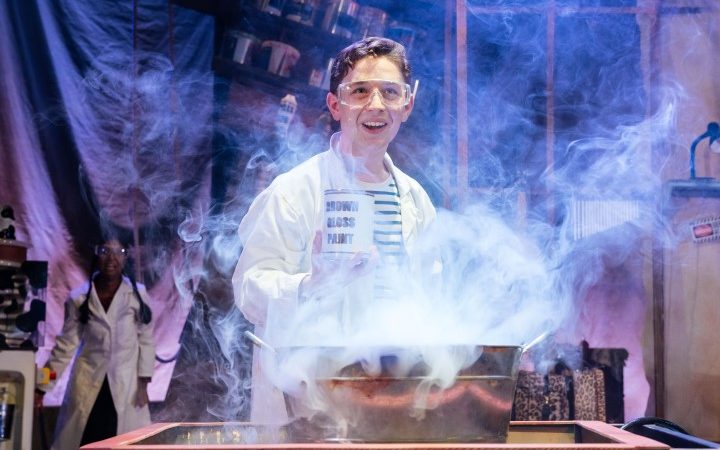 Ok that’s it. From now on, all children’s theatre productions need to feature giant humanoid chickens with a steampunk aesthetic and fabulous comic timing.

Chandni Mistry’s wordless (but cluck-heavy) turn in this unlikely role was the single best thing in a glorious 90-minute adaptation of Roald Dahl’s mischievous novel about a boy who concocts a new and explosive medicine for his malevolent Grandma. But there were plenty of other highlights too. Right from the off, with an inventive multimedia set that looked as much like a nutty professor’s science lab as the farmhouse where George makes his brew, this production had an anarchic sensibility that had young eyes in the audience twinkling with mischievous delight. The trick was to let the watchers be part of the plan, which George (Preston Nyman) did with gusto, asking the audience to be his friends and to shout ‘In!’ or ‘Out!’ as he explored the house emptying Helga’s Hairset, Flower of Turnips perfume and plenty more into his glowing, smoking saucepan. The joy of being part of such naughtiness kept everyone riveted, even past bedtime on a school night. 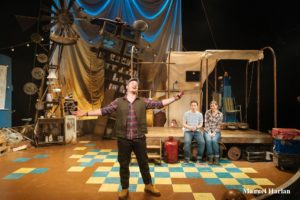 Grandma (Lisa Howard) had been updated from the frail old bird of Quentin Blake’s illustrations to a leopard-print wearing, gin-swilling matriarch, and her rock-and-roll entrance atop a mobility scooter was another laugh-out-loud moment. Elsewhere, David Wood’s adaptation stuck closely to Dahl’s original 1981 text. “Fizzle sizzle shout hooray,” George chanted, with the audience again chipping in with “Grandma better start to pray”.

By the end of the first half, the medicine had been administered and the newly-enormous pensioner had gone, prayers notwithstanding, quite literally through the roof. Then the poultry got a dose. Mistry, who for most of the production performs a lab-coated ensemble role, transformed into the befuddled bird and began doing a form of funky chicken dance around the stage that was totally joyful to behold. George’s dad (Justin Wilman) began planning for the world farming domination and Nobel prizes that his giant animals were going to generate, and even the truculent OAP temporarily cheered up.

The wheels came off, of course, and Roald Dahl fans will recognise his customary hint of darkness as Grandma disappears into tiny nothingness. But, by teatime, everyone was over it, just in time to deliver a musical disclaimer: “don’t try this at home”.

It’s a weighty responsibility, bringing such a national literary treasure as George’s Marvellous Medicine to the stage. The book’s vintage means that many who enjoyed it as children are now reading it to their own offspring, and that means parents in the audience who are as invested as the little people. Director Julia Thomas and co have done them all proud; it wasn’t just the young eyes that were twinkling.

George’s Marvellous Medicine is at Liverpool Playhouse until April 21, 2018 and on tour