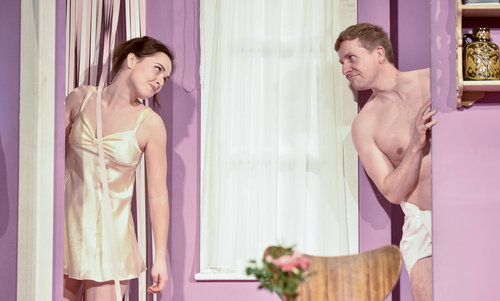 Once upon a time I owned an exquisite pair of purple velvet flares. They were the height of fashion and I looked the proverbial canine gonads. But I put on weight – you had to be as skinny as Twiggy to get into those things – and consigned them to my bottom drawer. When I disinterred them, 20 years later, I managed to get them up to my thighs before a glance in the mirror gave me the shock of my life. What on earth led me to imagine that they were anything but grotesque?

I tell you this story to illustrate how tastes change in a visceral rather than cognitive way. I had felt beautiful but now I felt appalled. I am a man of a certain vintage, the same vintage as the play under discussion as it happens. I probably saw it on a school trip to the West End – we only lived down the road so it was a fairly regular thing – but I don’t remember.

Relatively Speaking was Alan Ayckbourn’s first West End success in 1967. It made him famous – and rich. It was commissioned for the Library Theatre in Scarborough and then transferred to London with Richard Briers in the lead as Greg, supported by Celia Johnston, Michael Hordern and Jenifer Hilary 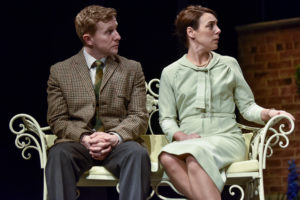 Like my purple flares, it’s a vintage piece. But unlike my flares, it’s a Chanel two-piece. Actually it’s more of a Bugatti. Highly-polished, beautifully engineered, a thing of great dramaturgical beauty. But would you produce it now? You wouldn’t take a Bugatti on the M62, would you? Times have changed.

It’s a farce. The play opens in a cramped London flat where Greg (Matt Connor) wakes up on a Sunday morning in a single bed and discovers a pair of men’s slippers underneath it which are not his own. His girlfriend Ginny (Lianne Harvey) appears from the bathroom in a hurry, she’s going to the country to see her parents and must dash. Greg challenges her about the slippers and ends up asking her to marry him, but she dashes. Greg, having found what she says is her parents’ address, decides to go down there too. 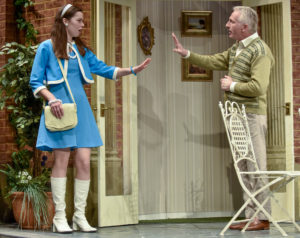 Scene two and the rest of the play takes place in the garden of a rather smart house in the Home Counties, where Philip (Crispin Letts) is having breakfast on the terrace with his wife Sheila (Jo Mousley). It’s clear from their conversation that she knows he has affairs and he thinks she does too. Then Greg turns up. There follows an exquisitely-crafted farce of mistaken identity in which one person saying the obvious thing would blow the whole plot out of the water, and you can only admire Ayckbourn’s and the cast’s ability to make us believe that no one says it.

It’s very funny, but for contemporary mores, questionably so. The plot is all about adultery and the relationships between the couples are, to say the least, unreconstructed. It has that tinge of darkness that took over Ayckbourn’s later work, but he dips in and out of it with great skill.

Scene one has some problems – it is difficult to do and contains some absurd business with a bed sheet right at the start which must be given straight out to the audience, setting entirely the wrong tone for a piece that otherwise must be played utterly truthfully to work. But once we’re into scene two, everyone plays it very well although I do have sympathy for Matt Connor who is in a part obviously crafted around Richard Briers’ ability to be hilariously funny while doing absolutely nothing. 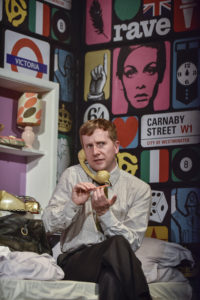 The last comedy I saw at the Coliseum was The Kitchen Sink, a hilarious local domestic play with a political edge. Exactly the kind of work the Coliseum should be doing in my opinion – so why choose a 50-year-old farce – however well crafted – based on the lives of upper-middle class southerners with dodgy social mores by modern standards?

I see it’s touring to Harrogate, which goes some way to explaining it, and I wouldn’t baulk at them doing The Importance of Being Earnest or The School for Scandal, which leads me to think it’s a matter of temporal distance. It’s too soon. It’s a world we’re still trying to move away from. Perhaps in another 50 years audiences will have the social distance to see it as a hilarious account of a long dead society? I hope so. Perhaps even my purple flares will come round again?

Relatively Speaking is showing at Oldham Coliseum until May 5, 2018. For more information, or to book tickets, click here.