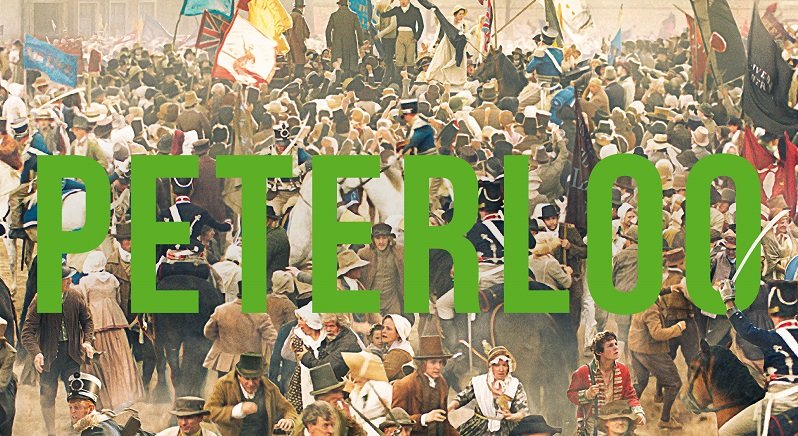 Over the course of 14 feature films Mike Leigh has covered a wide range of subjects, from the disastrous opening of a French restaurant and the fall of a post-war abortionist to an adopted daughter tracking down her birth mother and Gilbert & Sullivan getting their second wind.

In every case, you’d have to say that his films are first and foremost about characters rather than narratives. Leigh portrays people not as mere goodies or baddies but rather as complex figures in all shades of grey and it’s this that drives his work. His most famous creations tend to be fascinating as much because they’re flawed as because they’re engaging. Think of Beverly from Abigail’s Party, Johnny from Naked, or the titular Vera Drake and Mr Turner. Even his most memorable characters are shown to be capable of being grotesque monsters and vice versa.

Peterloo is the third Mike Leigh film to be set in the 1800s and the first in which – unavoidably, rightly – his customary avoidance of heroes and villains cannot apply. In the historical events depicted here, there are those characters who execute unforgivable ghastly acts, and those who are peaceful, blameless victims of them. As the title suggests, the focus here is on the massacre of August 16, 1819 and how it came about, and in Leigh’s previous work, events have never overwhelmed individuals quite so much.

It’s a handsome-looking piece shot by long-time Leigh cinematographer Dick Pope which takes admirable pains to recreate its place and period. At over two-and-a-half hours, it also takes its time establishing the context for what went on to occur in St Peter’s Field, with the fateful reform meeting only taking place towards the very end. It boasts a large, capable cast, drawing heavily on the ‘Fine Old Characterful Faces’ section of Spotlight. There are cameos for seasoned Leigh performers Roger Sloman and Tilly Vosburgh and meatier roles for Pearce Quigley, Maxine Peake and Rory Kinnear. In particular, Neil Bell impresses as muddle-headed activist Samuel Bamford, while Leigh regulars Martin Savage and Vincent Franklin bring lurid, putrid colour as magistrates Norris and Etlhelson. It’s a (slightly perplexing) sign of how very strong the cast is all round that Julie Hesmondhalgh appears as a character without a word of dialogue or even a name. 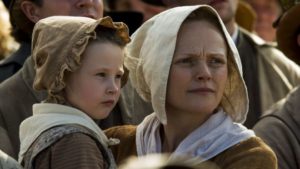 The film gathers pace effectively towards its shattering climax, which is as brutal and powerful as you would expect. For all that though it’s a long haul, and virtually the whole proceeding narrative is constructed from a variety of public meetings, meaning that the story is often being told via speeches rather than through dialogue. Conveying the historical context can sometimes prove problematic too, giving rise to some clunky dressed-up exposition (“Oh, is that what the Corn Laws are?”).

There is of course an attempt to find the human drama at the heart of the tragedy, but it doesn’t always succeed. The fact is that, whether because of the scale of the events or the size of the cast, few of the individual characters register sufficiently to have real impact. There are moments which reach towards a greater degree of complexity – when, say, someone among the authorities will suggest leniency or a working class reformer will consider taking up arms – but they’re fairly isolated. For the most part the magistrates and the military are portrayed as bad and the crusading workers are portrayed as good, and while that’s only right and proper, it’s a binary outlook which doesn’t suit Leigh’s generally more complex approach. 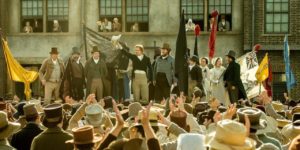 There’s also the fact that the powers-that-be are mostly more cartoonish and larger-than-life than the oppressed Mancunians, none more so than Tim McInnerny as an extraordinary, ridiculous Prince Regent. This creates a strange, uncomfortable juxtaposition between scenes that are outlandish and scenes that are unflinchingly realistic. Not only that, but it makes the oppressors seem much more vivid than their slight and forgettable victims, which is surely not the right impression to be making.

There are flaws here, but probably the most important element is that the nature of these events don’t play to Leigh’s strengths as a storyteller. Needless to say, there’s very little place for his trademark humour, even at its bleakest, and there’s a feeling that the more clear-cut, straight-ahead characters involved simply aren’t his cup of tea. Peterloo doesn’t always manage to bring the story to life as such, but to its great credit it does succeed in bringing it to the big screen and hence a bigger audience. There are many strong performances and at times it looks, sounds and feels properly remarkable. Despite some key reservations, then, it’s a powerful and compelling piece of work. It’s an important film to be sure and a good one, if not a great one. 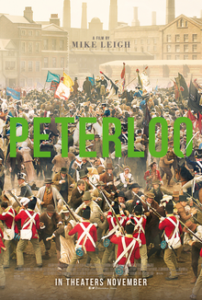 Peterloo is on general release from November 2, 2018