The Manchester Free Trade Hall was built on the site of the Peterloo Massacre.

As the slew of current documentaries and films attest to, not least Mike Leigh’s most recent release, Peterloo marks its 200th anniversary in 2019. The building on Peter Street was erected to celebrate the peoples’ right to meet and has a glorious history as a meeting place and concert hall

Today it’s a hotel, owned by the Radisson Blu chain, and last week I sampled its new Weekend Rikyu Brunch. I haven’t been there since the 1970s but the listed exterior is the same and inside they’ve kept the big Victorian square pillars, at least in the public rooms. But now there’s a new Japanese-style restaurant.

Anyway, in Cordoba in southern Spain there’s an elegant mosque dating from the 8th century with beautiful colonnades that seem to go on forever. Or they did until 1236 when King Ferdinand had a Catholic cathedral built in the middle, rather ruining the charm and harmony of the original. I felt the same about the Peter Street Kitchen. You can understand why they did it (those big Victorian rooms are far from cosy or intimate) and what they’ve created (a circle of comfortable banquettes facing inwards) is certainly cosy, although a bit squashed. But there are lights dangling everywhere which is frankly ugly.

The food, however, is rather beautiful. As you would expect from Japanese influenced cooking, everything looks amazing and some of it tastes very good too. Like Gaul, the menu is divided into three parts, Small Plates, Signatures, and Dessert. The tariff, £35, £55 or £70 per person gets you all seven small plates, a signature dish, and the desserts and, depending on how much you pay, some inclusive drinks. 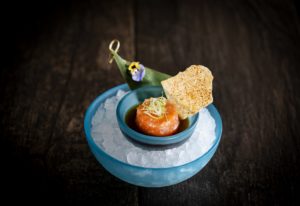 The standout small plate was avocado tartare with shichimi soy, a slightly hot and sour taste that complemented the green mush beautifully. Yellowtail sashimi in spicy yuzu was very good, too, and the blanched spinach and hazelnut salad with white goma dressing had a tahini tang to it that was very moreish. The tuna sashimi with truffle ponzu mayo was less impressive, the truffle seemed egregious, and my friend and I agreed that the aubergine with chili and wasabi sour cream tasted mostly of slightly off beef. There’s a whole lot of saucing going on here, and where Japanese food excels in simplicity and clarity, going from one well-sauced dish to another brought a confusion of tastes.  Best to drink something palate cleansing in between. Moet, for example. I love this job.

There are five Signature dishes to choose from and I had the most popular, chicken and waffles, and my guest had the organic salmon. The chicken and waffles were exactly that, with maple butter and chilli maple syrup, a kind of high-end Kentucky. I loathed it, for its blandness and sweetness; unlike the small plates it was not complex enough. It is, however, exactly what you want after a Friday night on the lash and that may explain its popularity. I should have had the sake-baked eggs with wasabi beef, spinach and Monterey Jack like the man sitting next to me. It looked intriguing and he said it was delicious. My guest’s organic salmon was pan-fried with red chilli and shiso salsa. The salmon was correctly cooked and the salsa, made from shiso – a herb that tastes like a cross between mint and basil, was understated allowing the salmon to come through. She pronounced it perfectly nice.

There are three desserts: kuru goma cheesecake with hassaku orange sorbet, passion fruit brulée with coconut sorbet and umeshu jelly and assorted mochi. No, we had no idea either. All three were great to look at but the brulée was probably the most beautiful dish of food I have ever seen. 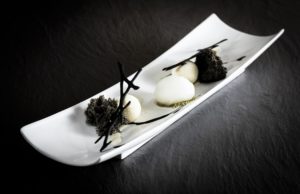 Kuru goma is black sesame and the cheesecake looks like a disc of bricklayer’s mortar. It tastes very umami and should be eaten on the same spoon as the hassaku sorbet which is a tarter version of an orange. The mixture is incredibly moreish.

Mochi ice cream is very on trend. It’s small scoops of ice-cream encased in a skin made of rice flour dough, making portable bite-size eats. You get three half-mochis here, coconut, yuzu and salted caramel and, while the ice-cream/sorbet inside is fine, we both found the skin rather unpleasant/unnecessary.

But the passion fruit brulee. You’ll know how good it was when I say that I don’t eat fruit. A problem for a food critic, you might think, but clearly not because I scoffed the lot. Umeshu is a plum wine which made a glorious orange jelly in the bottom of the bowl.  It tasted as delicious as it looked and in a contest between greed and beauty, greed won.

Which takes me back to Peterloo.  It was the greed of the landowners who dominated Parliament that led them to put tariffs on corn imports, thus keeping the price of bread high while cheap corn was available in Europe. Once we’re out of Europe, there’s nothing to stop them doing that again, is there?