The clamour of the world scrolls incessantly, regurgitating received wisdoms about Brexit, Fleabag and Neverland. Inevitably, perhaps, less consensual voices can be drowned out by the sound of the crowd. Flapjack Press affords them amplification.

The six voices raised this evening in honour of International Women’s Day are, by turns, raucous, sarcastic and passionate, and rarely less than distinctive. An auspicious pre-performance playlist, curated from the back catalogues of the Siouxsies and Debbies who pushed pop’s doors ajar, sets the tone and raises the bar.

Mistress of Ceremonies, Rosie Garland, whip-smart and whip-cracking, commands the stage like Lydia Bennet to The Joan Collins Fan Club’s Lizzie, dispensing bon mots and toffee hammers; keeping the house in disorder. She has a fine roster to muster: a barefoot Mel Rees whose florally-phrased angry letters to dead men nevertheless detonate with landmine precision, while Anna Percy affirms an eroticism unscented by civet, and Genevieve L. Walsh’s rail-track rhythms rail against a world that offers only square holes for rounded women. 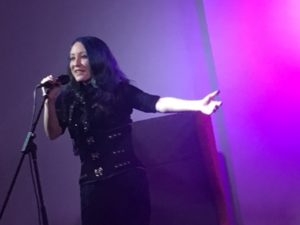 Sarah Miller rhymes the words that can go unspoken from school run to corner shop, un-censoring the self-censured, whether it’s the tacitly tactile liaisons of the Missing Girls whose sub rosa lives can never be allowed to ripple the surface, or fixing fast the colours of a blind woman’s vivid biography before the official record bleaches them bone-white.

Touching the everyday, her words bruise like Coronation Street. Likewise, the poet I must formally acknowledge as Northern Soul’s Cathy Crabb is rooted firmly in the familiar and the familial. An audience favourite, she connects with a plain-spoken ribaldry that has the warmth and acuity of Victoria Wood, inviting the listener to share her appalled delight at the absurdities of common non-sense.

It’s a hard act for Garland to top. 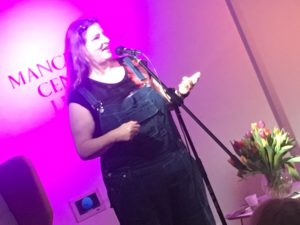 Garland weaves the same thread of curiosity and empathy with which Miller and Crabb stitch, picking out human life with needlepoint precision, yet in doing so affords them a heroic scale. The Wife Of The Colonel stands alongside a life that history might have papered over, the spouse of a fraudster husband exposed as female by birth, and offers the compassion its time did not afford. Something In The Water, her closing flourish, applies the same technique to a canvas as broad as two cities. An adopted daughter’s love letter to the flow of the Irk and the Irwell, to the ginnels of Pat Phoenix and Shelagh Delaney, to the contrarianism of “mouths strong from saying ‘no’”, it is passionate, unashamedly partial and peculiarly inclusive.