You may well blanch at the thought of yet another Hollywood ‘based on a true story’ film whose needle is stuck in the vinyl of JFK, LBJ, Vietnam, Watergate, Nixon etc etc – that endless broken record the Americans play while they gaze into the grubby bits of their political navels.

However, if you have a soft spot on your navel for Spielberg, Hanks and Streep, and if the word on the billboards is that The Post is set to Oscarise the hell out of 2018, the scent of popcorn will soon approach your nostrils and you will make that cinematic pilgrimage with only one question on your­ mind: sweet or salty? Popcorn, that is, but then again, it’s not a bad question to ask of The Post, Hollywood’s latest Nixon-era conspirathon.

The ‘Post’ in question is the 1970s Washington Post of the post-JFK/LBJ era, caught in an ethical, political and personal quagmire over secret and explosive files relating to the Vietnam War, into whose bloody swamps the US was sinking further and further. Streep chews her thick-rimmed specs and Hanks smokes indoor cigarettes gratuitously as the ‘Pentagon Papers’ plot weaves its way round the hot metal of the Post’s printing presses, while composer John Williams (who else?) layers the musical backdrop inimitably.

Sweet? Yes it is, sugared with innumerable nostalgia fixes, such as a good old-fashioned print newspaper story that clears the cyber-sinuses nicely by reminding us that – to riff on Theresa May’s Manchester speech on February 6 – there was and should still be space for a printed fourth estate that could, can and should be trusted to report on and analyse the day’s events honourably and accurately.

Tom Hanks (as fiery but lovable Ben Bradlee, Post editor) and Meryl Streep (Katharine Graham, the paper’s owner) are, of course, nostalgia fixes in themselves, and give these roles their time-honoured aplomb, oozing effortless sympathy and believability of character. However horrid or ugly they might try to look or behave on-screen and off, they’re both absolute Tinseltown teddy bears.

But, to overdo the Popcorn metaphor, there’s plenty of salt in The Post as well – most notable in its well-timed tapping into the male/female harassment theme changing the world as we speak. Streep, as Graham, is assailed by a classic man’s world bullying boys’ club (members of the Board) who talk at, across, down to, over and behind her – but never to. Graham, armed with the final say on whether to ‘publish and be damned’ in the face of pressure from everyone from Trump – sorry, Nixon! – downwards, finds herself in the battle of her life, to overcome her undermined confidence as a woman and a leader, and decide whether to hold (and cancel) the front page or let those presses run. Best picture? Best actress? Looking that way. Go see. 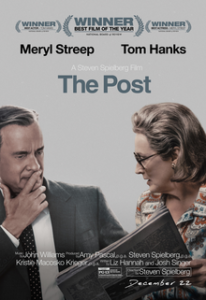