Curator Steven Gartside describes Break in Transmission, the current exhibition at Manchester Metropolitan University’s Holden Gallery, as “the pleasures and pitfalls of language, communication and meaning”. I’m already bumbling through my own pitfalls as I wait for the exhibition to open.

I head to the café in the Benzie building for a butty, and I’m looking at all the faces of the students and imagining what bright lights of the future are here in this microcosmos. I’m a bit giddy because I’m at the same watering hole as Manchester’s art world debutantes who are preparing to be presented to their society.

“It’s pin only,” says the girl at the sandwich counter. “Do you know your pin number?” She senses stupidity in me.

“I actually do,” I reply, laughing. “What would you have done if I didn’t know my pin though?”

She can’t be doing with me. “I’d have sent you to the contactless machine.”

I’m wondering if this is a place that needs firm direction; there are more signs leading you to the toilet than I have ever seen. And I’m thinking “do creatives lack a sense of direction?” Also, I’m thinking this: “Should I have a tattoo on my forehead saying, I’m not as daft as I look?” And, if so, would that tattoo confirm that I am?

Anyroad, the exhibition is an interesting one and, among the five artists, I am immediately engaged with the work of Fiona Banner and Kerry Tribe. Banner’s Dear Contributor looks like a carbon copy of a rejection letter sent to the cartoon character Snoopy about his newly-written story and says things like “get lost” and “we wouldn’t use one of your stories if you paid us”. It has a fun childlike quality to the tone, as well as being cruel, and is over-written a few times so the reader really must scrutinise it to get the gist. There’s a real conflict in the piece where joke and insult meet. 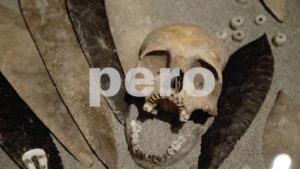 It was produced by Banner’s own publishing house, The Vanity Press, which gave her the freedom to avoid decision-makers overseeing her output. I like that this work is in no way a gallery or agent transaction but the sole choice of the artist. In the same way, her five-minute film Tête à tête is a meeting of comedy and tragedy as two windsocks communicate awkwardly, moved and vocalised by the wind, while in contrast the wind sways and moves the clouds and leaves in harmony. The windsocks are protagonists; humanised things that can’t fully interact.

Kerry Tribe’s work is also concerned with alternative routes of communication, and in her 2017 film Afasia (a deliberate misspelling of the condition aphasia which is caused by brain damage or a stroke that affects language and expression) the photographer Chris Riley, who lives with aphasia, talks of his condition, his work as a photographer and his passions. This is layered with an exploration of the artist’s own struggle to communicate while learning Spanish. The film presents Spanish words for Chris’s English language voiceover and visuals from Mexico’s rich cultural signifiers, then sometimes crystals and minerals that Chris adores. It feels like two people are struggling with a language while still enjoying things in life that they can’t successfully articulate.

And I’ve struggled to write these paragraphs. At first, I wrote about Tête à tête – “those wind things wanted to be a thing” and of the film Afasia, I asked my sister “if she thought seagulls could recognise the sign for ice creams and she said, ‘don’t be ridiculous’.”

So, if I was to sum up the exhibition, I reckon it’s about the gap between holding a thought and finding the significance. It’s about the moment before you put the pin number in.

Break in Transmission is on at Manchester School of Art’s The Holden Gallery until March 16, 2018

The team at @wingyipstore has put together a selection of #Christmas recipes that will fill your kitchen with mouth-watering aromas to spice up your celebrations. This week, we've got a delicious recipe for Bibimbap – Leftover Turkey. northernsoul.me.uk/recipes-to… pic.twitter.com/keXriwDwF7