There’s a YouTube video featuring folk singer Julie Fowlis on the BBC’s Transatlantic Sessions 3 in 2008 which has the Scotswoman sitting surrounded and attended – like some young folk goddess – by middle-aged men all doing her musical bidding, while she sings Bothan Àirigh am Bràigh Raithneach (A Sheiling On The Braes Of Rannoch). It’s all completely beautiful, and a really hard act to follow live. Could Kendal’s Brewery Arts Centre pull it off? The scene was set: not a seat to spare amid the cosy shadows of the Brewery’s ‘Malt Room’; handsome pints of ale at the bar (courtesy of local brewers Handsome) alongside black-pudding-and-mustard-flavour Lancashire crisps (not very ‘Veganuary’, but tasty). A perfect, intimate Gaelic folk session in the making – and it was Burns Night too.

Then on came Gaelic folk’s darling (whose claim to fame is Pixar blockbuster Brave, for which she sings theme song Touch the Sky) accompanied by menfolk as on the video, but this time with Irish husband Éamon Doorley on guitar and bouzouki, Duncan Chisholm on fiddle and Tony Byrne on guitar. Other instruments loomed on the stage, including ukulele, various whistles and highland pipes, and something bang centre-stage that looked like an antique brown briefcase. We were then drenched by the reverb the soundman had put on Fowlis’s bewitching voice as she sang a mysterious, sea-evoking Scandinavian song she described as “a wee trip to the other world”. This revealed the theme of her current musical preoccupation and the idiom for her 2017 album alterum (Latin for ‘other’), namely other-worldliness – “the spaces we move between, linguistically, socially and otherwise”. 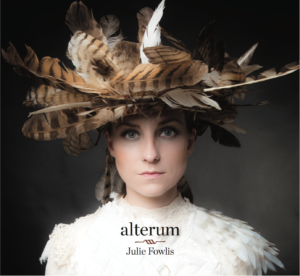 For the next 90 minutes Fowlis moved skilfully between linguistic spaces, swapping her soft-spoken Highlands-English accent for some hard Gaelic tongue-twisters that Robbie Burns would have been proud of. A memorable highlight was a gorgeously sung Gaelic-meets-Galician song called Camariñas (“some songs inhabit you when you first hear them,” she said, introducing it). The song’s abstruse lexicon, she confessed to affectionate chuckles from the audience, was “not much use to anybody”, but the audience was without question inhabited by Camariñas.

The goddess of Gaelic had seduced us all by the end. The only jar in the evening (apart from the Handsome ale) was an audience response in her ad-hoc request spot. She repeated the remark aloud, looking surprised – “Nothing girlie?” – but her blarney-quipster husband came to the rescue: “I’ll sing the next one then.”

Perhaps as a response to the mild heckle, she ended the gig definitely doing “nothing girlie” – wrestling in the shadows at the back of the stage with some beast of an instrument and then appearing upfront bleating out the bagpipes, pulling the grotesque faces required to get the notes. It was like being in ‘another world’ – one where the ‘girlies’ get to play the instruments only the ‘boyies’ have been allowed to play. Brilliant. By the way, the strange brown briefcase was in fact a ‘shruti box’. Go on – Google it.