I own a very few recipes which are precious, and all of them came from my grandmother.

She was a fabulous cook and I’ve still never tasted chips that come close to hers. She was completely self-taught; working in a sewing factory from an early age she was never at home to watch her own mother prepare meals. I remember her telling me about the first dinner she made as a newlywed, terrified of ruining the food she had bought and of my grandad discovering she couldn’t cook. Somehow, she figured out how to make potatoes with onions and mince. My grandad loved it and congratulated himself on marrying a domestic goddess, little knowing she had never boiled a potato in her entire life.

The fact that her first meal was a success proves what a natural she was. Determined that we should all be capable of making good grub, she began teaching me as a tot. One of my earliest memories is of standing on a tall stool in the kitchen, fork in hand, mashing up poached chicken livers to make pâté.

She had a magical way of making the most mundane dishes taste divine, and I’ve tried all my life to measure up to her culinary example. She would happily give out recipes to anyone who asked, but although they worked, they never tasted the same. After she passed, I realised the sly old thing had knowingly changed quantities and omitted special touches that meant no one could copy her exactly. Thankfully, she taught me well and I was able, after several attempts, to crack her secret code. Her parkin recipe was always a firm favourite of mine so I made it my mission to faithfully recreate it. These days we traditionally associate parkin with autumn and Halloween, but I remember it as a cake that both warmed and cheered many a long winter evening. As I have coeliacs, I am sharing my gluten-free version, but it’s just as easily made with ordinary self-raising flour and oats. 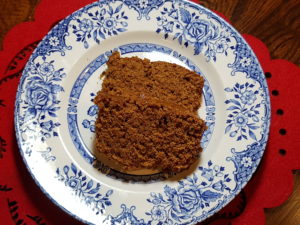 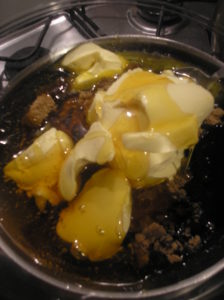 Put the oats into a blender and grind them down to almost flour consistency. Melt the syrup, treacle, sugar and margarine in a bowl over a pan of boiling water, stirring occasionally. If you are using a steel cake tin, grease it thoroughly with margarine and preheat the oven to 160c.

Add all the dried ingredients together, including the spices, making a well in the middle. Then pour the melted sugar and margarine mixture into the middle, slowly stirring through the dry ingredients. Add the beaten egg, and if the mixture is too stiff add a little milk. Ideally the mixture should be a batter-like consistency.

Pour the thoroughly blended mix into a tin and cover with foil. Bake at 160c until done. Use a skewer to test and also keep an eye on the cake while it cooks as it catches easily.

Once baked, allow it to cool then slice and serve. It can be eaten with butter or on its own.