“It’s the job of fiction to be truthful.” David Constantine in conversation at Blackwell’s, Manchester

Emma Yates-Badley September 27, 2019 Authors & Reviews, Books, It's Not Grim Up North, Northern Soul writes... Comments Off on “It’s the job of fiction to be truthful.” David Constantine in conversation at Blackwell’s, Manchester 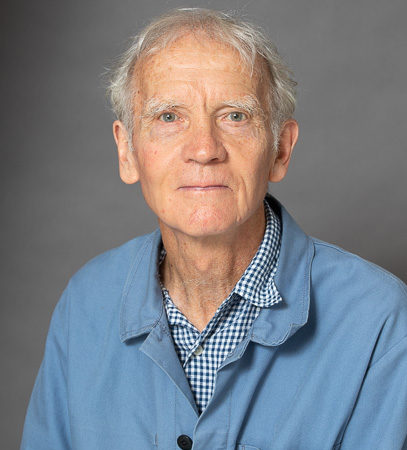 Literary events are tricky. While often packed to the rafters with engaged readers, on rare occasions they can be a bit lifeless, like a piece of lettuce found at the back of the fridge.

I should probably begin with a disclaimer. David Constantine in conversation with Nicholas Royle at Blackwell’s Manchester does not come under the old lettuce category, but it did begin with a reading from Constantine’s latest collection, The Dressing-Up Box, titled Midwinter Reading, which depicts an odd bookish event. While not based on a single incident (Royle did ask), Constantine shared an anecdote about a bizarre literary event which took place on what was “essentially a roundabout in Bracknell”.

For Constantine, it seems that events such as these are a pleasure. “It’s nice in any such occasion when people congregate not to make money, not to vilify one another, not to tell lies, but just to sit somewhere together and do something that’s in a space that’s set apart for something other to go on than what we normally face all the time outside.”

Salford-born Constantine, who now lives in Oxford where he is a Fellow of Queen’s College, is hailed as one of the greatest writers of the short story form, and has also published volumes of poetry and several novels. The Dressing-Up Box, his fifth collection, centres around moments of personal crisis such as bereavement, individual failure and a crisis in identity, but that’s not to say they aren’t optimistic. Hope is what comes after the struggle, it’s what makes the crisis worthwhile, and it’s what’s worth fighting for. Time is also another preoccupation and he seems to suggest, quite wisely, that only by looking back to the past can we finally move forwards.

Interestingly, speech marks are omitted but, instead of making this a confusing read, it adds to its cadence. I’m completely invested in the world he creates, the characters and their measured, often stilted, interactions with each other.

For Constantine, this is deliberate. “I wanted to blur the line between what people utter aloud, what they might be thinking but, most importantly, if you’re employing a third person narrator, their job is to help the reader into the truth of the character’s situation particularly when it’s a truth that they would not be, by class or education, or there are millions of reasons why people can’t say it. It’s your job as a writer to say what people aren’t saying.” 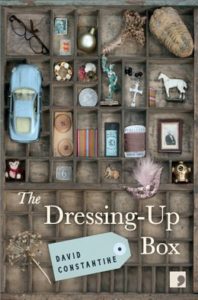 The language is poetic, even to describe the commonplace, and sentences take on a dreamlike quality. Royle cites an example from the titular story, The Dressing-Up Box – a strange tale about a group of kids living in a ‘Big Safe House’ where the adults are deemed dangerous (and my favourite story in the collection) – where Constantine uses three sentences to describe snow. As a creative writing professor at Manchester Writing School at Manchester Metropolitan University, Royle spends “a great deal of time telling students to pare back” (and having once been his student with a penchant for waffling, I can attest to this) but Constantine does the opposite – and it works beautifully.

“If your first love was poetry, it’s not possible to be indifferent to the way words go together,” he explains. “And it’s difficult for someone who is trying to make words do more than they would normally do to say quite straightforward things. There is an absolute responsibility to help people speak who can’t otherwise, so these lyrical things are more or less conscious efforts to keep insisting on the value of people.”

It would be remiss of me not to mention Constantine’s short story, In Another Country (published in a collection of the same title in 2015 by Comma Press) which was adapted into the Academy Award-nominated film 45 Years starring Charlotte Rampling and Tom Courtenay and directed by Andrew Haigh. The story centres around a married couple whose anniversary celebrations are disrupted when the preserved body of a young woman is discovered in the receding ice of a Swiss glacier. 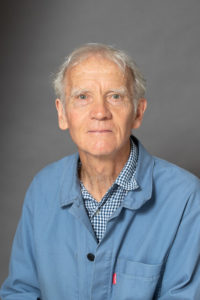 Constantine is interested in “a sudden eruption into a person or people’s lives of stuff that they’re not going to be able to bear” and notes that while the situation for the couple in In Another Country is deeply unfair, “it’s the job of fiction to be truthful”. Short story and poetry collections often centre around a theme but The Dressing-Up Box is a little harder to pin down. This one requires unpicking but these are the stories that stay with me long after the last page is turned. “I write [stories] and when it seems I have enough, I put them together,” Constantine reveals. “I couldn’t be said to write a central topic or concern.”

While not necessarily thematic, children are present in the majority of the collection. “I don’t think that’s an accident,” he says. “It’s a preoccupation with being here and now in this world when a very young woman stands up and tells the United Nations what they should actually be doing.” Constantine is, of course, referring to 16-year-old Swedish climate change activist (and my 2019 heroine) Greta Thunberg and her recent speech at the UN Climate Change Summit in New York. “We don’t want to regret handing something over [to our children] that’s trash. Now, that is very hard to bear.”

Prior to The Dressing-Up Box, I hadn’t read Constantine’s work at length, but having devoured his latest collection and listened to him speak so passionately (and Attenborough-esquely), I’d read the back of cereal boxes if he penned them. After the event, I took to Instagram and wrote: “Is it weird to want David Constantine to make audio bedtime stories? I could listen to him read for hours.” The team at Blackwell’s Manchester responded with “I would buy those bedtime stories.” Suddenly it didn’t feel bonkers anymore.

So with poetry, novels and short story collections already under Constantine’s belt, could audio books be next?

The Dressing-Up Box is published by Comma Press and available to buy now.