It’s been a weird summer over here at Fleedneedles Forage. In my last blog, I mused over how hawthorn blossom heralded the beginning of warmer days, little realising that the next two months were going to be some of the hottest and strangest I’ve ever experienced in these parts. Nestled in a crook of the West Pennine moors, our village is usually cooler and wetter than other regions of the North West. Not this year.

Parts of May were baking hot and, even though it was forecast, no rain was forthcoming. By mid-June I was beginning to suspect we were in for a hot and unnaturally dry year. Even after regular watering, I still had to watch my herbs and wildflowers either shrivel up or grow far too quickly, rushing through their flowering season in a matter of days rather than weeks. We reached the bottom of our water butt in early June and I was already praying for rain when the fires started.

First it was Saddleworth. I flinched as I watched the devastation on the news. Then it was Rivington. We could see the smoke through our side window and my heart sank. It had been dry for too long; I knew it was a tinder box up there and deep down I suspected there was little chance that the fire crews could easily extinguish the blaze. Moor fires are fairly regular occurrences here during the summer months and they are usually out in a matter of hours or, at worst, days. A heavy downpour often halts any serious damage but it was soon glaringly obvious that this was going to be different.

A smoky smell hung in the air during the day which was powerful but bearable. However, as the sun went down and the temperature dropped, a dense cloud of smoke descended and drifted eerily down our silent street, everyone holed up indoors trying to keep the smell out. On the first night we hadn’t expected the smoke to sink down the valley but we woke coughing and spluttering in the early hours – our open window had allowed the room to fill with smoke. Despite the stifling heat, for the next two weeks it was impossible to leave a window ajar after 8pm. Night after night, in the suffocating temperatures, we were forced to seal every door and window and yet, still the cloying smoke sneaked in.

During the day smoke billowed from the hills obscuring the sun. We watched scores of fire engines wobble their way up and down the unadopted track up to Rivington. Flocks of birds screeched across the sky fleeing the scene and I felt sick to my stomach at the thought of the devastating effect on wildlife. In the next few days, scores of farm and industrial vehicles arrived carrying water and lending a hand where they could. After a week the helicopters began whirring overhead during daylight hours, ferrying water between the reservoir and the tops. On social media, pictures circulated of firefighters looking exhausted and smoke-stained. I looked at their dejected faces and felt as though they were confirming my darkest fears: it was out of control. 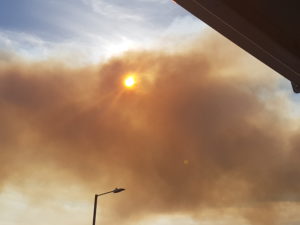 All the paths and roads near the fires were closed and, from further down the hill, you could clearly see the flames on the tops silhouetted by the night sky. It’s at times like these that you are struck with an overwhelming gratitude for the work of the fire service. I think everyone here felt incredibly grateful for their tireless work, and several local companies offered refreshments to the crews. Members of the local community wanted to do their bit too and, after suggestions from the fire service of much needed items, various designated drop off points were soon inundated with supplies.

News circulated about someone being arrested for starting the fire deliberately which seemed unimaginably destructive. Like many people, I have loved this part of the world my whole life and could not comprehend why anyone would wilfully damage this beautiful place. By this stage, local feelings were understandably running high and, to be honest, if the miscreant had been publicly named and shamed, I wouldn’t have fancied his chances.

At the same time, reports began to emerge of people breaking down closed road signs and tramping all over the highly volatile area. One guy who breached a barrier soon became overcome with smoke and collapsed, giving the emergency services an extra drama they didn’t really need. In another act of indescribable stupidity, a group were found having a disposable BBQ.

There were several similar stories over the month the fires raged and, while I understand that people consider the area to be public property, the bans were there for a reason. We could regularly smell smoke in the air as late as last weekend so the fires were clearly still smouldering in the peat below. On a brighter note, local gratitude spawned various fundraising activities in aid of the local fire service which goes some way to restoring faith in humanity. 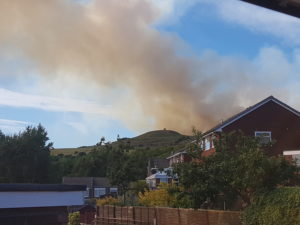 Two weeks ago, Rivington and the surrounding area were given the all-clear with a strong message to stay on paths and not roam on open moorland. To be honest, if folk have a genuine appreciation and respect for the land they will already understand it needs to recover and restore itself. I can’t face looking at the burnt and blackened parts yet, although nature is amazing and I have heard there are many signs of regeneration.

Various theories have been plied by the media including that the heatwave is a sign of things to come. If true, we need to protect our wild landscapes from further damage. A good start would be banning the use of disposable BBQs and other combustible past-times. And, perhaps this is a controversial view, but I think the people who act so irresponsibly should be forced to assist the fire service so they can experience first-hand the chaos and carnage they have caused.  You would that imagine that the sheer scale of this summer’s fires will have alerted people to the dire consequences of such thoughtless actions. I won’t hold my breath.