Fleetneedles Forage: Festive Flummery and a History of Christmas

Every year I try to pin Christmas down – an atmosphere, a perfect gathering, a woodland walk on a crisp December day. Maybe it’s none of those or perhaps all of them. You see, that’s the thing about the festive season, it’s impossible to quantify as it means a thousand different things to each of us, from the chaotic family Christmas with its usual balancing act between tension and joy, to an adult Christmas full of boozing and revelry. This year I decided to do some research to make sense of the season that, in many ways, makes no sense at all.

As I looked at its origins there was one enduring theme: nostalgia, a deep yearning for years gone by when everything was perfect, the fairy lights twinkled and you received a Raleigh Chopper bike from Father Christmas. But this is not a new phenomenon. In fact, nostalgia and the belief that Christmas is not what it was has always been is a key factor of the festive season. Christmas: A History by Judith Flanders shares a popular verse from the early 1600s called The Old Cap, or, Times Alteration, perfectly illustrating this seasonal nostalgia, the poet lamenting days gone by when the wealthy opened their halls to the poor and needy and offered them festive repast.

Was cherished then of many;…

The holly tree was polled

At Christmas for each hall;

There was fire to curb the cold.

And meat for great and small:

The neighbours were friendly bidden,

And all had welcome true;

The poor from the gates were not chidden

When this old cap was new… 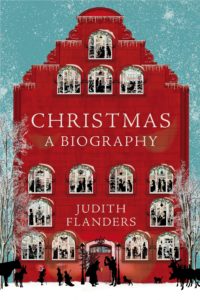 In reality, there’s not a great deal of evidence to support the charitable yesteryear which the poem harks back to. Landed gentry did hold lavish seasonal dinners but the guests were usually people connected to the Lord through family or business interests. They were rarely strangers and no mention is made of the poor. So were bygone Yuletides better? Perhaps they were for some but one thing is obvious – Christmas had a rocky road before it became what we now consider the festive season.

Firstly, the origins of Christmas. What is now widely regarded as a Christian holiday almost certainly began as a pre-Christian Winter Solstice celebration. Indeed, its pagan traditions were continued enthusiastically for centuries after Britain was Christianised, with debauched behaviour and revelling being much frowned upon by the Church. During the reformation, Christmas was again under attack, this time for being a ‘popish’ holiday, clearly its pre-Christian roots now long forgotten. The protestant Kirk in Scotland took a particularly dim view of Christmas and banned it completely in 1561. To celebrate the holiday could have resulted in excommunication.

In Britain, Puritans took a similar hard line against the Yuletide season and, as they settled in the New World, they went out of their way to ignore it. Unfortunately (depending on your point of view), other European settlers had brought their own traditions and even some of the pilgrims’ servants continued to mark the day. And so the seeds of the American Christmas were sown.

Back in Blighty, the Civil War took its toll on the season when parliament banned Christmas in 1643. Not everyone agreed and many openly flouted the law, braving punishment to mark the holiday. More laws were passed each year on the subject but still people continued to celebrate. Following the Restoration of Charles II these laws were revoked. You have to wonder if the Commonwealth might have lasted a little longer if they’d had the good sense to leave Christmas alone.

Now safe, Christmas slowly began to change and elements of other countries’ traditions were added to the mix. The introduction of the Christmas tree, long been attributed to Prince Albert, had actually been introduced by other members of the German Royal family, including Queen Victoria’s mother, at least a decade before Albert and Victoria married. Originally adopted by the elite, the Christmas tree fashion slowly spread until it became a national tradition. Many of our other festive stalwarts such as the Christmas pudding and crackers come from the Victorian era, and Charles Dickens is widely regarded as the instigator of many of these traditions. In truth, his novels gave us a set idea of what Christmas should and should not be but he cannot be held solely responsible; our American cousins were probably far more influential. 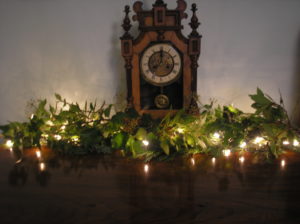 Fuelled by the melting pot of so many different nations’ festive traditions, America fashioned its own particular brand of the season. Santa Claus, originally St Nicholas, is thought to have been introduced by Dutch settlers. Christmas: A History finds first mention of him in Rivington’s New York Gazette in December 1773:

‘Last Monday the anniversary of St Nicholas, otherwise called Santa Claus, was celebrated at Protestant Hall…where a great number of sons of that ancient saint celebrated the day with great joy and festivity’

By the early 1800s the idea was solidifying into a character we now recognise with Clement C. Moore’s The Visit of St Nicholas or, as it is better known, Twas the night before Christmas, presenting St Nicholas as a magical gift bringer complete with sleigh and reindeer. Perhaps accidentally, Moore created a lasting image that was bound to inspire imagination. In a fairly short period of time, the idea of Santa Claus and his nocturnal gift giving had taken hold in America and Britain. By the 1880s these customs had become firmly entrenched, although when I was a child the name Santa was considered American – I was told his real name was Father Christmas. In my lifetime this has changed again. He is now largely known as Santa Claus and even Santa’s Christmas elves have been absorbed and accepted as tradition in Britain.

And that’s the beauty of Christmas/Yuletide, whatever you want to call it. It is ever changing, morphing to fit the shifts of modernity and society. It can be whatever you want to make it and it doesn’t have to be about perfection and presents. As I’ve delved through the history of the season, it’s become obvious that the real essence of Christmas is to eat, drink and be merry. In these uncertain times, it’s best to be thankful that you can afford to do so.