Folken: civic identity, philanthropy and creating the cities we want to live in

Laura Brown June 13, 2016 Arts, Heritage Comments Off on Folken: civic identity, philanthropy and creating the cities we want to live in

Liverpool feels like it’s on the cusp of change, the growth of grassroots movements, of shifting and changing sands, this explosion in the number of micro businesses.

It’s exciting, it’s also a little scary. Because nothing is built to suit micro business (hello tender set-ups) and when we talk about business we rarely talk about the smallest people. When we think of success, we think big, right? No size fits all. Northern Soul’s Laura Brown, one of the organisers of this year’s Folken, writes about our civic identity and the fact that we are all having the same conversation about cities, whether we live in the north, south, east or west.

Folken is about cities. Over three weeks and five events we’re exploring what our cities need, what we like about them, what we’ll change and why stories could be our new civic currency.

The street I live on in Liverpool runs east to west, meaning that as the sun sets the buildings glow. The leaves on the chestnut trees opposite do their little dance as the evening breeze wisps in. I am content.

I’m walking to my studio. The pavement has long been taped off to knock down an historic property to build student apartments for foreign postgraduates. A week after they finished, the cladding began to fall to the street. I’m so mad I could spit. The irony that the building which used to stand there was named after the feminist and social reformer Josephine Butler isn’t lost on me. The woman who campaigned for higher education for women had her building knocked down so a university can make more money from foreign students. And then it crumbles.

Cities are complicated. It’s a complex love affair. You adore one element but another makes you so angry. Cities have to be for everyone – they have to meet the needs and wants of every person who live in them. People have to feel they have a say, and the right to a say. 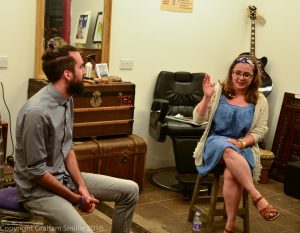 Our civic identity is evolving as we become more connected to each other through technology. It is much easier now to find grassroots local communities than it was before. It’s simpler to find an audience for something or to get the word out. You can plug into networks far more easily than you used to. This makes us happy in cities and it’s something a city can fulfil much easier than anywhere else. It is so grassroots, so entwined in a belief we can build from the ground up that it’s the foundation cities are built on. It’s a new identity but it’s also an old one, an idea of community.

This connectedness creates a sense of ownership. We are social creatures. We like to feel we can build small cinemas, arrange free marketplaces, host hack days. It makes us feel we are cultivating a corner of the world dedicated to the things we think are important.

This is all well and good while it’s good, while it’s positive things that people might like. But, when it isn’t positive, people use the same networks and have the same sense that they have a right to tell those they feel are in control what they think. And things turn sour, fast. Cities and civic identity are so woven into a political structure, a political identity, that there are existing power struggles. It can become so embittered and embattled that people who fight against a development suddenly find they’re fighting against a mayor. And they didn’t want to fight against a mayor. They wanted to say they didn’t like what was being done to a building and to heritage. They didn’t like what was happening to their community. But they became enmeshed in something else. And it rumbles on. The very communities we build because we want to be connected are deemed to be bad things because they go against the voice of the city. It’s no wonder people stop talking.

The political fault lines are problematic. It turns some people on and it turns way more people off. The last local election turnout in Liverpool was 31.4 per cent. To some that means more people aren’t bothered by what happens in the city than those who are. But that isn’t true. People are interested. They just don’t want to engage. It doesn’t follow that the political infrastructure which has become synonymous for their civic identity should become the only way they are empowered to have a say in how their city operates. 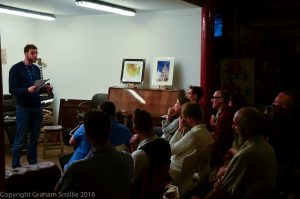 We figured it was time to ask. Stories are what we operate in on a day-to-day basis so that’s the currency we’re using. Through Folken we have five events over three weeks. The first is about grassroots and social enterprises and the role they have in civic culture and identity. The next is about money, where it comes from and how you feel about getting it. Next we’re talking protecting creative space because, well, Google what’s happening in cities every once in a while and figure out why. Then we’re talking about the state of independence before we all come together for a night of storytelling and folktales at the end of June.

How we build and how we define our cities is going to be one of our biggest challenges over the next decade. The last ten years has left many of us in Northern cities (and towns) feeling badly bruised. But if any good came out of that ferocious downturn, perhaps it left some of us with a feeling that if we want to build the cities we need, perhaps we should start doing it ourselves.

I’ll finish with where I always start with cities, and that’s Jane Jacobs. An urban writer and activist who changed how so many people saw their own empowerment and relationship with their cities, she is a good place to start before we all tell our own tales.

If we’re thinking about the civic identity we want, extending that idea of philanthropy to each other should be at the heart of it.